Watching Tuesday’s first meeting between the Golden Knights and Winnipeg Jets reminded me just how good the hockey is when these two teams get together.

It’s a fast-skating, hard-hitting, opportunistic kind of game. The atmosphere at the Bell MTS Place is amazing, just like it is at T-Mobile Arena. You can see both teams have a mutual respect for each other.

And they should. Both have been smartly built by their general managers. Both are well-coached. Both are always prepared. Both are playing at a high level despite key injuries.

Which begs the question: If you’re a Golden Knights fan, would you sign up right now for a sequel of last year’s Western Conference Finals?

Damn right you would. Ditto if you’re just a fan of the sport.

Tuesday may have been a prelude for what could happen this spring. The Jets prevailed 4-1 on the strength of a short-handed goal and pair of final-minute empty-netters. The Knights, despite a team-record 26 second-period shots and seven power-play opportunities, managed to get just one of their 43 shots by Jets backup goalie Laurent Brossoit. He is 10-0-1 as a starter this year and has won seven straight.

You know what, I like periods like that. I like games like that where I’m tested early and often. The second period was definitely one of those and it got me into the game. There’s not a lot of rest in between. I like that. -Brossoit

Yeah, the Knights ran into a hot goaltender. It happens. Think of all the opponents who mutter to themselves on the bench when they face Marc-Andre Fleury. But the Knights can take solace in the fact they went into a tough building, fell behind 2-0, kept battling, made it a one-goal game thanks to you-know-who (more on him in a moment) and had plenty of chances to gain a point or two. 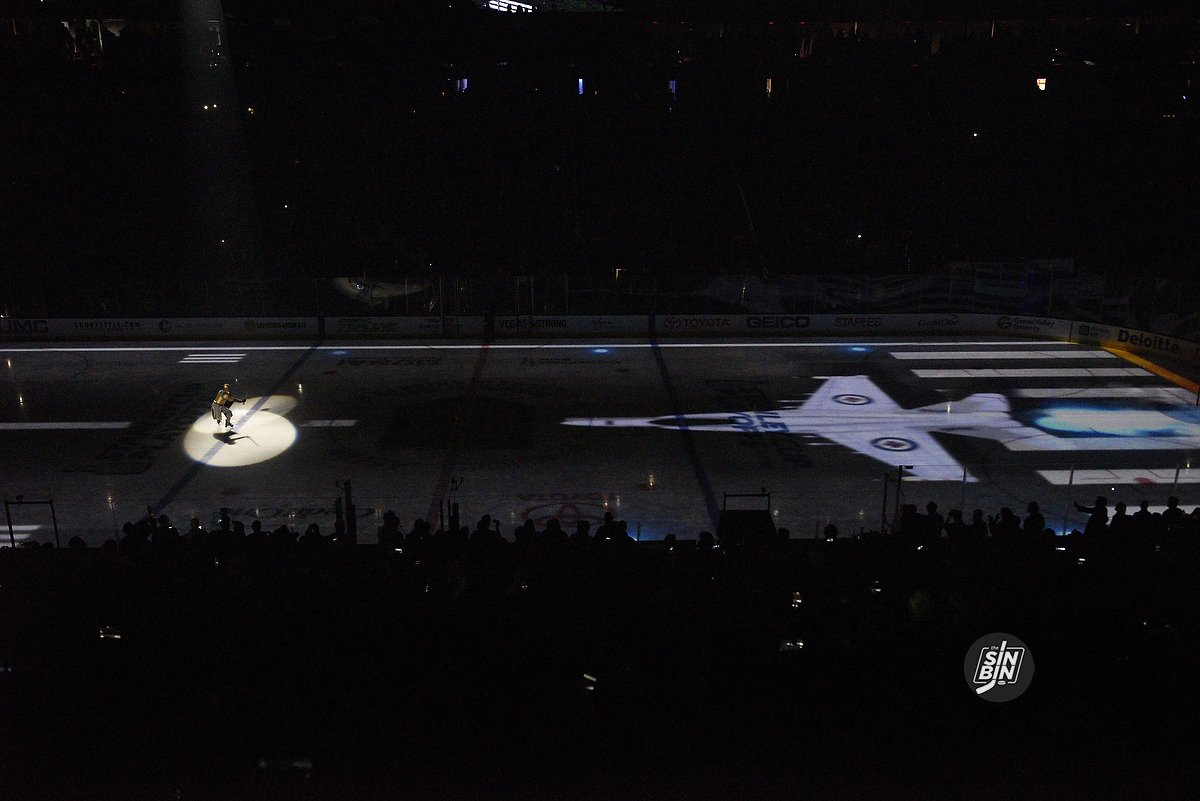 If there’s a postseason rematch, will the Knight cut another Jet in half? (Photo Credit: SinBin.vegas Photographer Brandon Andreasen)

But that’s what makes things so compelling when I watch the Knights and the Jets. The matchups are great. The coaching battle so acute.

These two teams have two more meetings left in the regular season, both in Las Vegas — Feb. 22 and March 21.— and I would anticipate it’ll be more of the same. Hopefully, it leads to another meeting in the postseason.

By then, I would like to think Jonathan Marchessault will have scored again and William Karlsson will have registered a point. The team’s No. 2 and 3 scorers are trying to battle through some tough times. Marchessault has just one goal in his last 10 games while Karlsson has just one point since Christmas and has been held off the scoresheet for eight straight games, his longest drought as a member of VGK.

To their credit, they continue to play hard. Marchessault is getting good looks but when you’re hitting posts and crossbars, not to mention the other team’s goalie is stoning you, it can make life frustrating.

He is among the most accountable guys in a locker room full of accountable players. And he’s too good a player for this slump to continue. He probably misses having Reilly Smith out on the ice with him. Ditto for Karlsson. But who knows when we’ll see Smith back out there?

As for Wild Bill, he may not be generating points, but he has done his best to prevent the other team from doing so. He continues to be a defensive stalwart, coming back into his own end to help his defensemen and his goalie. His penalty killing efforts have remained excellent.

Fortunately for the Knights, Brandon Pirri continues to wield a hot stick. He picked up his eighth goal in 11 games when he redirected Brayden McNabb’s shot from the point to give the Knights their lone goal Tuesday. Pirri has 13 points and he’s also making plays without the puck, helping backcheck and assisting his D.

I was watching at Brian Blessing’s watch party at Sunset Station Tuesday and there’s no question that Pirri is a fan favorite. Every time he had the puck on his stick, you could feel the fans in the room get excited. As Blessing said to me, “The puck just finds the kid’s stick all the time.”

Pirri has played 13 games in a Golden Knights sweater, dating back to last season. In those 13 games, he has 11 goals. To say he has been a godsend is an understatement, particularly with Marchessault and Karlsson slumping and Smith not in the lineup.

The good news? He’s not going anywhere. At least anytime soon. And with this team’s propensity for getting guys injured, my guess is there won’t be a hard decision that needs to be made with Pirri.

Maybe Marchessault and Karlsson should touch their new linemate’s stick to change their luck.

My thanks to everyone who showed up for last Saturday’s author signing at Barnes & Noble in Summerlin. We had a great turnout. But the big one is this Saturday (Jan. 19) at The Arsenal at City National Arena. I’ll be signing copies of “Vegas Born” from 10:30 a.m. to 12:30 p.m. It’s going to be packed at the morning skate with the Penguins in town, so watch the guys prepare, then come by, say hi, buy a book and get it autographed.

There are only 75 copies available so first-come, first served. My thanks to Bill Foley, Brian Killingsworth, Eric Tosi and Sage Sammons of the Golden Knights for allowing me to have the signing on their property.

See you Saturday morning at CNA!