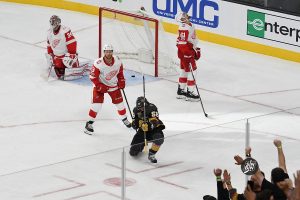 The obvious decision if Tavares is signed is to move Haula down a line and keep him at center. I’d advise against this. The main reason being Cody Eakin. He adds many positives down the middle for a depth line, but I don’t think he’d be as impactful on the wing. Also, opting to shift Haula to the second line wing opens up the opportunity to bump up Tomas Nosek.

If Vegas were to lose Neal and Perron, they lose a total of 41 goals. Tavares scored 37 last season and has scored 30 or more four times in his career. Adding Tavares and using system depth would greatly improve the team going forward. Keeping Neal and Perron would limit the window of contention.

Tatar’s output is another big component to the equation. If the 27-year-old Czech averages career statistics, the second line should thrive. Keep in mind, Tatar has 119 goals in seven seasons, but he’s only played five full seasons. In his first two seasons, he only played a total of 27 games. Tatar’s adjusted averages would be 23 goals and 21 assists per season. The problem is that he wasn’t that guy in Vegas. Putting him on a line with Tavares and Haula should change that and bring back the guy George McPhee traded three draft picks to acquire.

The last thing to consider is the cost of Tavares. Despite their massive amount of cap space currently, the Golden Knights future demands a lot of salary cap. William Karlsson needs to be paid now, Shea Theodore, Colin Miller, Nate Schmidt, Alex Tuch, Erik Haula, among others will all need money in the coming years.

However, even with Tavares and signing Karlsson to a long-term deal, the Golden Knights still wouldn’t be underwater cap-wise with their forwards.

*Based on current salary speculation from Matt Cane)

Adding depth is one thing, adding star power is another. Washington’s top two lines were a problem in the Stanley Cup Final, and it all started with the centers. Moving Haula to the wing allows a much better center option with Tavares. It’s possible the duo would score more together, and we know they’ll defend better against the league’s best forwards.

Also, keep in mind signing Tavares also leaves room for a defenseman. Or maybe they’ll hold on to most of that cash and wait until next offseason. Vegas may have enough to sign fan favorite Drew Doughty to an extended deal. Can you imagine that introduction?