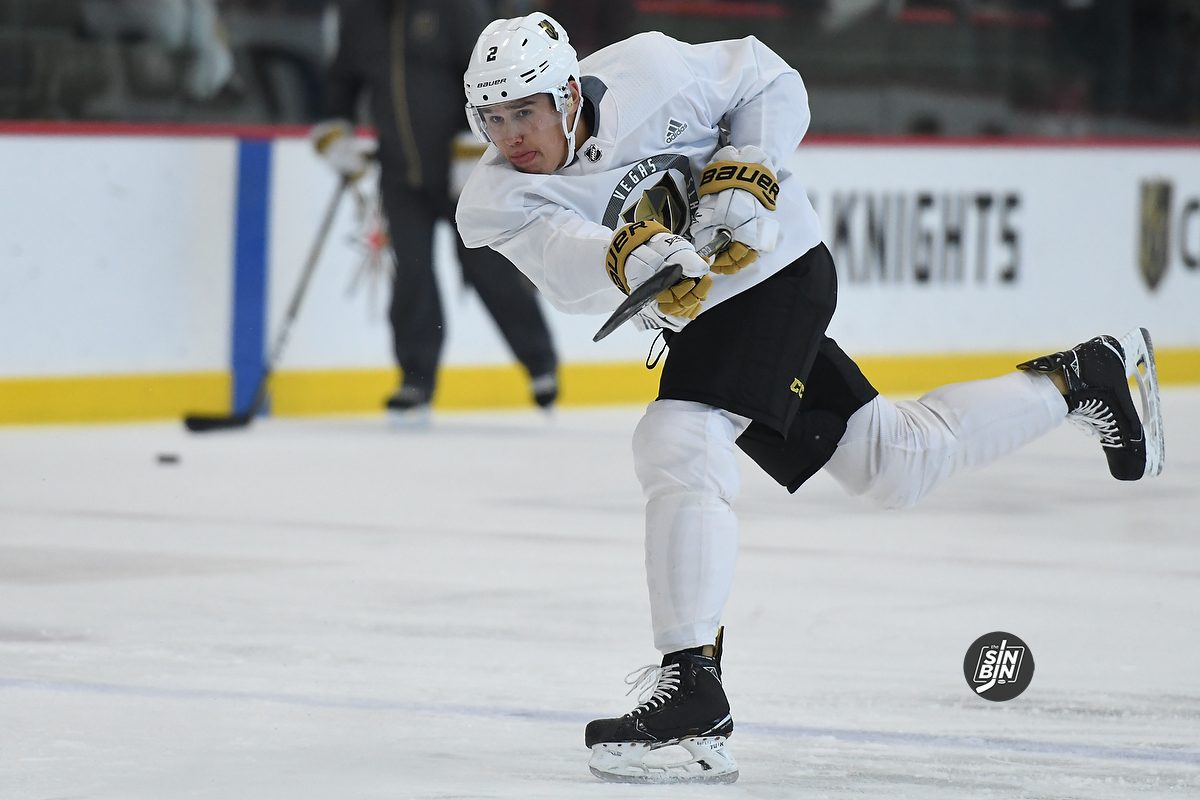 This guy is the answer to the title of this article. (Photo Credit: SinBin.vegas Photographer Brandon Andreasen)

When it comes to young defenseman, organizations like to take their time.

Every defenseman wants to play right now. But he’s got to go through the process of taking step one before taking step two. They have to defend well, they have to read what’s coming at them. -Ryan McGill, Golden Knights defense coach

Last year fans watched forward Alex Tuch skate amongst boys in Development Camp. His maturity and professional experience were on full display up against the younger prospects. Zach Whitecloud wants to be that guy in 2018.

As far as maturity wise, I pride myself in doing the right things at the right times. I’d like to think I’m ready for every situation that was handed to me. Being with the Knights, it’s key that I come in here and help the guys that are new to the experience. -Zach Whitecloud

Whitecloud’s age, body development, and NHL experience made him stand out in Thursday’s prospect scrimmage and even more so in Friday’s. The 21-year-old is attending his second NHL development camp (last season with LA) and has picked up a lifetime’s worth of knowledge over the past four months.

I signed on March 8th, and met the team in Buffalo and ever since that day I’ve been taking everything in. I don’t think words could explain how much it meant. Just learning how to be a professional hockey player all the time, on and off the ice. -Whitecloud

Since arriving from Bemidji State, the right-handed defenseman soaked up the experience like a sponge.

To have that experience and learn from guys like Deryk Engelland, Nate Schmidt, Marc-Andre Fleury, Coach Gallant… everyone has helped me try to become the best player and person I can be. -Whitecloud

It’s possible the former Brandon Wheat King has a chance of making the opening day roster. Whitecloud’s balance of size and mobility could bolster the Golden Knights bottom-pair depth for next season. Albeit, he played in one NHL game the young blueliner handled his assignment well in early April. Against the Oilers, Whitecloud was +3, skated 16:42 TOI, and had one blocked shot.

Just like every other defenseman it takes a long time and you can’t put the cart in front of the horse. With Zach you have to make sure he takes the steps that he needs to take to become a good player. To be quite honest with you, you don’t want to put that pressure, that sort of timeline on any defenseman or any young kid at this time of year. -McGill

Defining their skill is the ultimate goal for NHL prospects, but building leadership qualities can be as important for some. Like Tuch, Whitecloud works on both. His upperclassmen attitude is a good model for younger players to take notice. The 6’2 defenseman talks about eating the right foods, getting enough rest, and being an all-around professional. Which includes, taking media courses to deal with idiots like us.

We had a great media staff in Bemidji, they taught us how to communicate, but there’s a common sense factor. You got to know what to say, and when to say it. You have to know how to approach people and have people skills. I always have time for people. -Whitecloud

Whitecloud’s maturity and experience is going a long way in Development Camp, but will it translate into NHL minutes like it did for Tuch? The question remains to be seen. However, fans around town should keep an eye out for Whitecloud, because he’s looking out for you.

Whether it’s an autograph or a kid, or saying hi to someone on the street, whatever it may be. I always have time for people. And we’re not just communicating necessarily with the media, we’re communicating to fans. Our entire fanbase, people out there in Vegas, and all over the world. -Whitecloud

So if you see a pied piper with a Golden Knights hat on backwards, give a loud “what’s up?” to Zach.