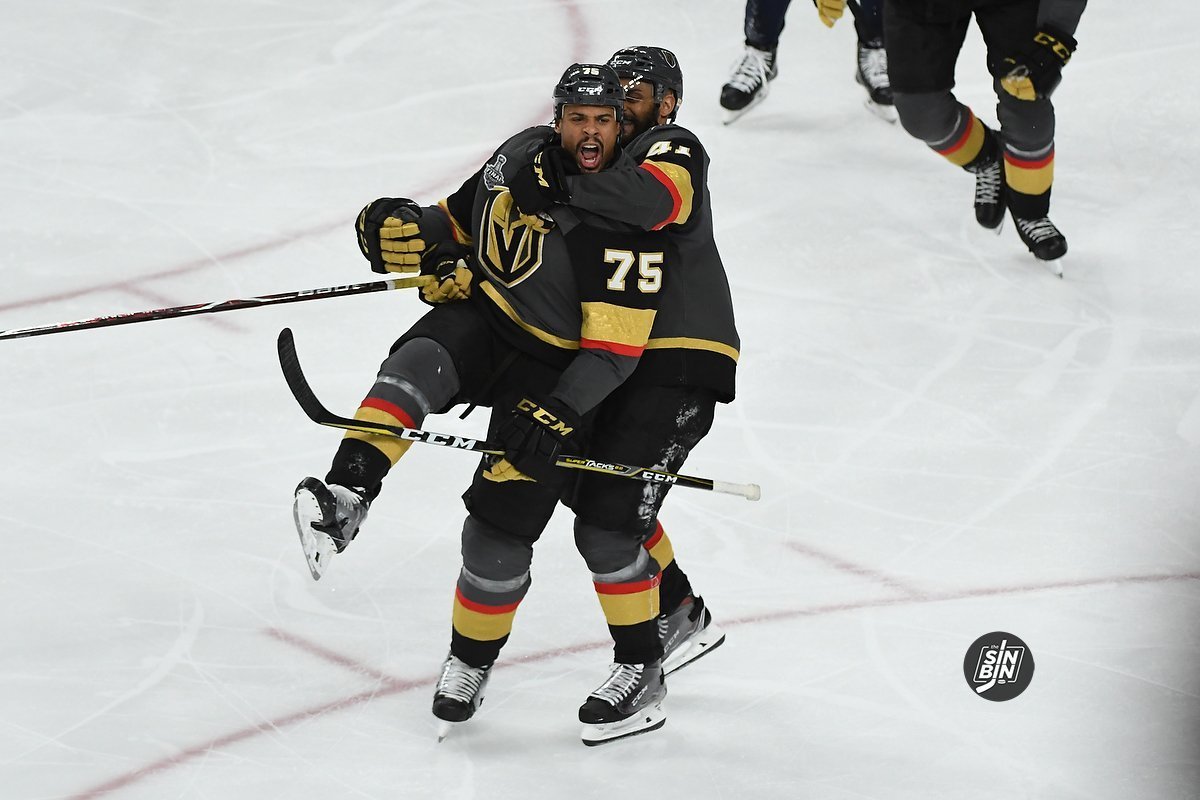 As we head towards the playoffs the composition of the Golden Knights “perfect” lineup is going to become a major topic of discussion. Assuming full health, and it appears the Golden Knights should have it barring any new injuries, the top six should be locked in as it was prior to Max Pacioretty’s injury. It looks like this:

The next obvious pair of pieces are on the third line. Those are center Cody Eakin and right-wing Alex Tuch. Meaning the lineup now looks like this:

The final obvious piece is the fourth line center, that’s Pierre-Edouard Bellemare. Thus, we’ve got this:

To me, because there are two slots open on one line and only one on the other, the focus should be on creating the best fourth line possible and then using the leftover player to fill out what already should be a promising line of Eakin and Tuch.

Because the Golden Knights prefer to roster a fairly standard fourth line (meaning it’s much more of a checking/possession/don’t give up goals line) Pirri and Zykov aren’t great fits. They’ll come back into play when we consider the final piece on the third line.

Rather than give my opinion on how it should line up, I’d rather use numbers. So, using NaturalStatTrick.com’s “Line Tool,” I’ve gone through each potential option to see how they’ve performed as a trio when together.

There are plenty of ways to look at that chart and obviously, sample size comes into play big time here. However, the best line certainly appears to be Carpenter, Bellemare, and Reaves. They’ve scored three while allowing three but have amassed an impressive 66% scoring chance percentage in nearly 80 minutes of play. They’ve created 46 scoring chances while allowing only 24 and it gets even better when you consider where the chances are coming from.

In high danger situations, the line of Carpenter, Bellemare, and Reaves have generated 23 high-danger chances while surrendering only 8. The PDO number of .965 also indicates they have been somewhat unlucky with their scoring too. The Golden Knights shoot just 6.52% while on the ice, which would surely improve if they continue generating nearly one high danger chance every three minutes.

That line would leave William Carrier out, but he should probably be considered as part of a rotation with Reaves. While the sample is an incredibly low 9:01, the numbers are fairly similar and the PDO once again indicates they’ll improve over time.

The obvious answer of Carrier, Bellemare, and Reaves simply don’t control play enough to warrant using both. The reason for this is because neither Carrier nor Reaves play on special teams. By playing both, the Golden Knights would be forced to go without Carpenter or Nosek, leaving them short a penalty killer. Also, Gerard Gallant has shown he doesn’t like to use Carrier or Reaves late in games where he will use Carpenter and Nosek.

That leaves us with Nosek, Pirri, Carrier, and Zykov as the options to fill the final slot on the third line. The numbers don’t do much for us as there’s no trio of the group (with Tuch and Eakin) that have played more than 50 minutes together either this season or last.

So, this time I will throw out my opinion. I like Nosek in over Pirri or Carrier. I don’t think there’s a spot for Pirri on the power play if the Golden Knights are healthy and his inefficiencies clearing the puck out of the zone, coupled with Tuch’s, could cause matchup concerns, especially on the road. They probably won’t score as much with Nosek, but the top six can easily pick up that slack.

In conclusion, here’s what I believe to be the perfect lineup for the Golden Knights heading into the playoffs.

Now, I’ve got six games to change my mind. (Oh, and there’s always the Erik Haula wild card to change it all too.)

SinBin.vegas Podcast #149: How Much Is Too Much?