The Jon Merrill The Golden Knights Hoped For Has Finally Arrived

When the Golden Knights took Jon Merrill in the NHL expansion draft from New Jersey a couple of years ago, they basically were betting on the come.

Merrill had a little NHL experience. But the former University of Michigan defenseman could do a lot of things. He could skate. He could move the puck. He could take the body. He had good size. Basically, there were enough tools in the box for general manager George McPhee to take a shot. 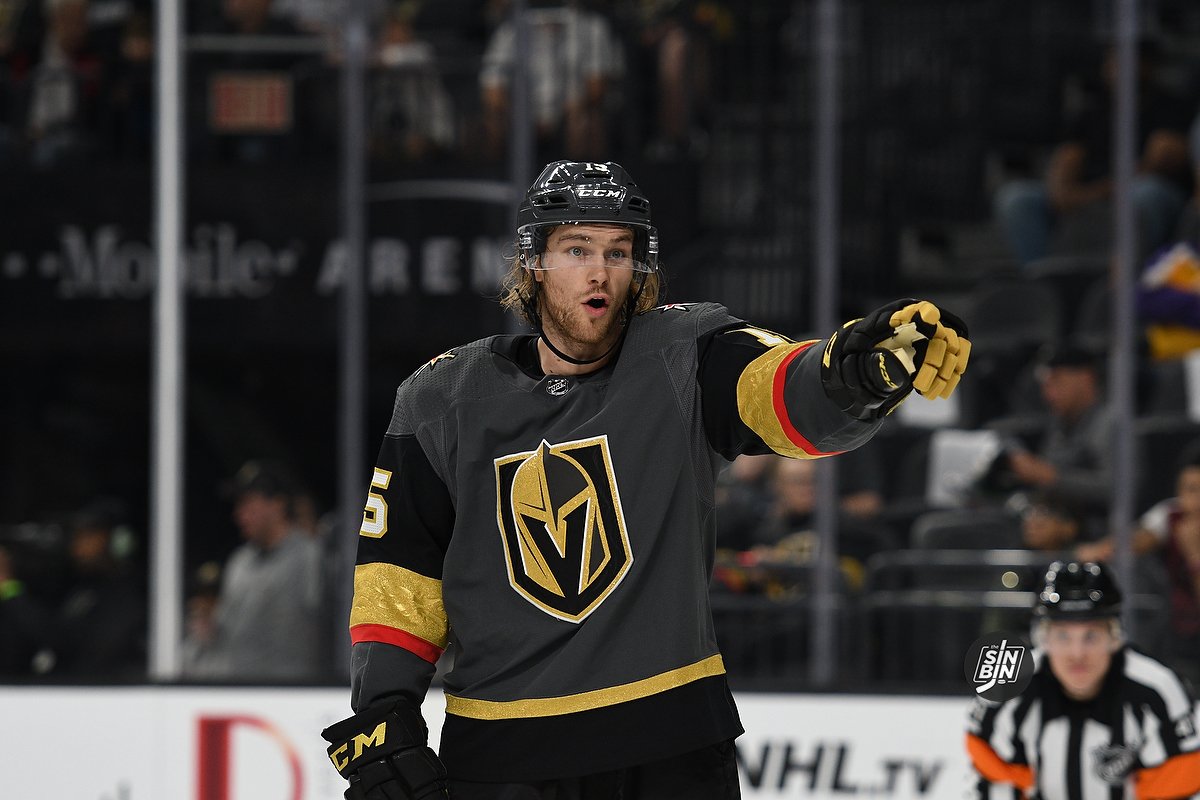 But Merrill didn’t get a chance to show he was ready to be an NHL regular. In 34 games last season, he averaged just over 16 minutes of ice time, had one goal and two assists. Many fans thought he wouldn’t be back for 2018-19.

However, he had a lot going for him. There was the salary. He was only 26. He was a good soldier and was liked by his teammates and coaches. It was more a matter of opportunity.

And when Nate Schmidt was suspended for the first 20 games of the season, Merrill got his chance. Coach Gerard Gallant paired him with Nick Holden, the free agent the Knights had acquired over the summer and who had essentially replaced Luca Sbisa.

But the pair struggled to find chemistry early. They were vulnerable in their own end. They made questionable decisions in when to pinch to keep the play alive in the offensive zone. And the skeptics figured Merrill would be the scapegoat and would be sent to the minors or just waived outright.

Yet, he stuck around after Schmidt returned Nov. 18. He didn’t see a lot of ice time and was a healthy scratch for 17 games of an 18-game stretch. But he never stopped working and assistant coach Ryan McGill, who works with the defensemen, kept Merrill engaged and didn’t let his confidence sag. At some point, another opportunity would present itself.

And it did. On Dec. 17, Colin Miller sustained an upper body injury against Columbus. He has been out ever since. But unlike Schmidt’s suspension where Merrill may have played somewhat cautiously, he has been aggressive and sharp. Gallant reunited Holden with Merrill as the third D pairing (Schmidt and Brayden McNabb are the top pair with Deryk Engelland and Shea Theodore the second pairing) and voila! They’ve connected and have been a big part of the Knights’ recent success. The team won seven straight and have won eight of their last 10. The Knights have 60 points, one less than second-place San Jose and two behind first-place Calgary.

You know, I think that the team collectively has played a lot stronger game, which helps us out. So I think, like you said, we’ve had some chemistry recently and we can hope to build on that and keep things going. -Merrill

The numbers for Merrill are trending the right way. His TOI is up to just over 17 minutes a game. He scored his first goal of the year Thursday in the Knights’ 3-2 loss to San Jose and he picked up an assist in Saturday’s 4-3 overtime win over Chicago, giving him a three-game point streak.

Overall, he has five points in 27 games this season. Last year, he had just three points in 34 games. Most important, the Knights are 8-1-1 in the last 10 games Merrill has been in the lineup.

His one negative stat? The 33 penalty minutes he has accrued thus far, a career-high for the six-year NHL veteran and second-most on the team after Ryan Reaves’ 56. But bear in mind you have to keep in context what the penalties are, when they were taken in the course of the game and did the opposing team cash in on the power play as a result of Merrill sitting in the penalty box?

Seventeen of Merrill’s 33 minutes came in a single game. Back on Oct. 28, Merrill received two for instigating after the Senators’ Mark Borowiecki ran Cody Eakin, got five for fighting Borowiecki and had a 10-minute misconduct tacked on. In that instance, Merrill can be forgiven as he was having the back of one of his teammates and standing up for his team.

Eight more were picked up over two games. Back on Oct. 30 against Nashville, Merrill was in the box for four minutes. Saturday against the Blackhawks, he picked up a double-minor for high sticking Brandon Saad. That’s 25 of 33 minutes coming from three games out of 27. So it’s not exactly like Merrill suddenly turned rogue. But there’s no denying he has been a more physical, more aggressive player this year.

I’m having a lot of fun right now. It’s fun to go on streaks like that. -Merrill

But could the fun be coming to an end?

Miller is skating with the team. He could be activated as early as Tuesday at Winnipeg. My guess is GMGM waits until Saturday’s game against Pittsburgh to activate Miller. Normally, that would mean Merrill goes back to being a healthy scratch. But given how well he has played, perhaps Gallant finds a way to keep him in the lineup.

Maybe Holden gets a game or two off. Perhaps Engelland gets a brief break. Or, someone on the blue line sustains an injury and the decision is made for Gallant and Merrill stays on the ice. Gallant doesn’t like to change things when they’re working and he could play Merrill with Miller just as easily as he could Holden.

He has played really well lately. I guess he is in a routine of playing a lot of hockey right now, so I really like what he is doing for us. -Gallant

Here’s something else to consider. The trade deadline is February 25th. Merrill’s recent run could have served as an audition, if you will, to be included in a possible trade. Opposing team scouts are at every VGK game, both home and away. They may not be coming to watch Merrill specifically, but perhaps his good play of late catches someone’s eye and he reports back to his team’s GM and that GM picks up the phone and gives McPhee a call.

My guess? He stays put in Vegas. He maintains his role as a fill-in and continues to contribute as needed. There’s a lot of hockey left to be played. Players are going to get hurt. There’s the postseason to consider. Merrill knows the system. His coach likes him. So do his teammates. Chemistry matters.