The word of the day in the Golden Knights locker room was “doubt.” It’s a word that’s all too familiar to expansion team who now finds itself in a 3-1 hole in the Stanley Cup Finals. They’ve been doubted every step of the way, and now they hear the doubt from the outside creeping back up, maybe as strong as it ever has, and they are ready to relish the opportunity like they have before. 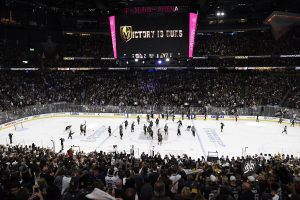 It would be another crazy element to the fairy tale. As if it needs another one. (Photo Credit: SinBin.vegas Photographer Brandon Andreasen)

I asked Nate Schmidt if there was more doubt now or before the opening game of the season. He gave the classic puzzled Schmidt look, thought about it for about 10 seconds, and said “equal.”

They’ve never been down 3-1 in a series. They’ve tied their longest losing streak of the year. They are facing a climb no team has successfully made since the 1942 Toronto Maple Leafs. Quite simply, they’ve never been here before, but in a way, it kind of feels like they have.

I don’t think anyone thought we could make it to this point now, and I know a lot of people that are already giving it to Washington and saying the Cinderella story is over but we’ve been resilient all year and we’ll be ready for tomorrow. We are not looking past tomorrow. -Alex Tuch

We’re going to do what we’ve done all year. We’re just going to focus on the next game and see where it takes us. Stuff that we’ve done this year has never been done. -Jonathan Marchessault

What they’ve done all year is win. At every pass, they’ve proven the doubters wrong and found a way. Now, down 3-1, they’ll look to do it again; all the while trying to do the only thing they really set out to do in the first place.

I don’t think we started the season or started the first game thinking “we are going to prove people wrong.” The thing that we thought was that we’ve got to make the city proud. I feel like we are back in this situation where people don’t believe we can do something, but a lot of people are focusing so much on how we are down 3-1, we have to win three games, but I’m pretty sure we’ve won more than one game at home this season and that’s what we have to do tomorrow. We have to win one game. -Pierre-Edouard Bellemare

They’ve done more than make the city proud, they’ve become the city’s identity. In Bellemare’s mind, Game 5 isn’t a chance to get back into the series…

We have one more chance to play in front of our fans, be that energy to show them that we are all proud to be here and to do something great for the city. With the support we’ve already gotten, I think the city already has our backs. It’s us to the city, we want to win for them. -Bellemare

This is new for the Golden Knights, but so has been everything this year, and every step of the way the odds seemed to be against them. At every pass they’ve proven people wrong and made the city proud, why stop now?