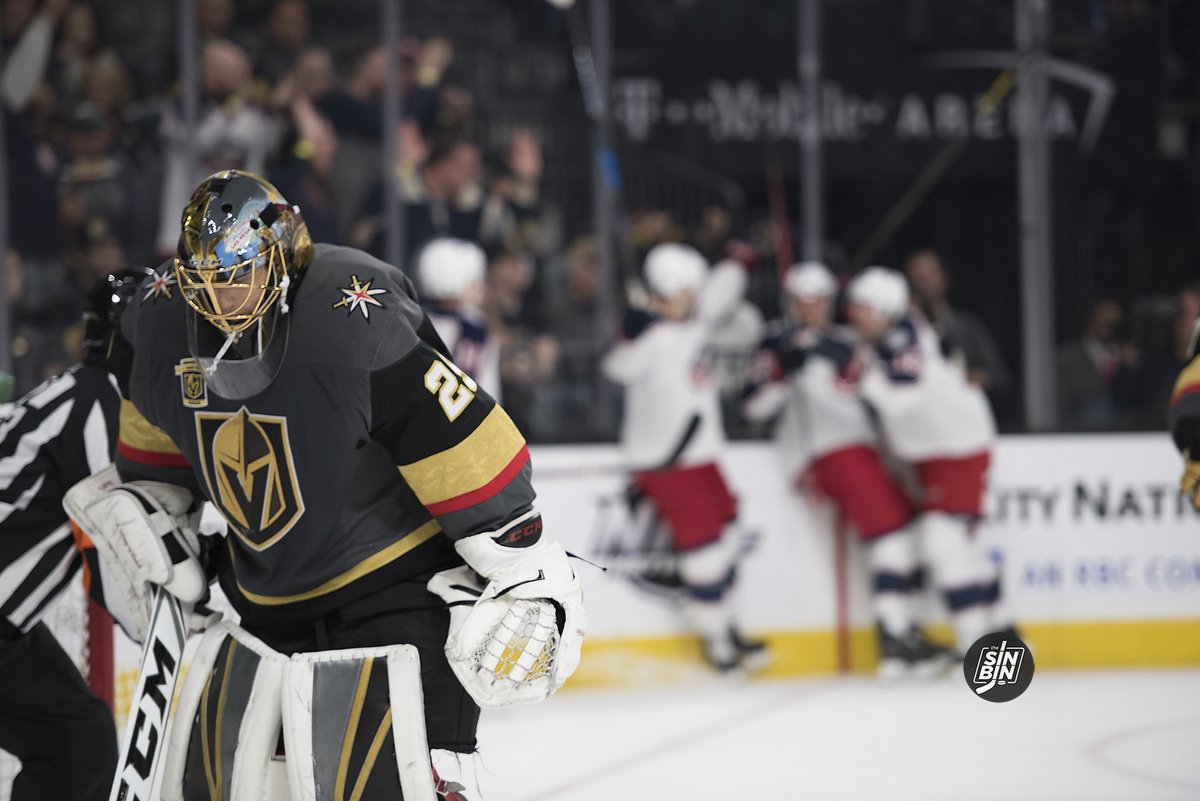 The Golden Knights lost again. Again they fell behind in the 1st period, again they watched the lead grow to a number they wouldn’t be able to overcome, and again they salted away a pair of points at home they really should have won.

Everyone’s entitled to their own opinion as to what’s going wrong, but personally, I’m sick of the intangible excuses that are being made for this team. Tonight’s game was not about a lack of effort, a sense of complacency or any other unmeasurable factor people want to throw around. Instead, tonight was a full display of all that is wrong with the Golden Knights.

It starts with forward depth. This team doesn’t have enough of it. When Cody Glass and Jonathan Marchessault are out they don’t have the horses to fill their roles. And it would be a problem if there were any two of the top nine forwards missing.

Because of it, they’re forced to move Alex Tuch up to the 1st line to play out of position and on a line he has never fit on despite playing 13 prior games with Karlsson as the center. Some line combinations don’t fit, especially when you are playing one player out of position on his off-wing. That’s okay, but when a team is built in a way in which they literally don’t have another option outside of William Carrier, who has been exclusively a 4th liner until 2 weeks ago, it becomes a problem.

That then bleeds down to the 2nd line. The best 2nd line the Golden Knights can make is Paul Stastny between Max Pacioretty and Mark Stone. It’s a line that has proven to work time and time again, including an unreal start to the playoffs last year, but isn’t truly an option currently because it leaves the bottom six far too bare. So, that forces Chandler Stephenson, to fill a role higher in the lineup that most teams would prefer. Stastny moves down in an attempt to put a bit more skill and vision with a pair of wingers who have proven they can’t be relied upon to score.

Finally, you are left with a 4th line that can certainly do the job of a standard 4th line, but must be expected to do more because there’s not enough scoring above them.

When they need an extra player, they turn to Nicolas Roy, Valentin Zykov, or Keegan Kolesar. All fine players, but none can be expected to score at the NHL level, especially when playing alongside other non-scorers Cody Eakin, Ryan Reaves, William Carrier, and Tomas Nosek.

This is a risk the front office took when they chose to go down a path this offseason of offloading talented forwards for a prospect and a bushel of picks as opposed to attempting to bite the bullet and unload some overpaid role players. When healthy, the team has plenty of offense, when not, they’re short.

Which leads to the next problem. Defensive scoring. With Nate Schmidt having a bit of a down year to this point, the only legitimate offensive threat is Shea Theodore. He may end up outscoring the rest of the Golden Knights blue line combined. If the forwards were putting up three or four goals a night, it would be fine to have a defense focused on defending, but while missing players, the team needs some chip in from the defensemen. At the moment, they don’t have the guys to do it. Nic Hague may eventually become more of an offensive weapon, but while he’s getting his feet wet in the NHL, making sure his defensive game is under control is more important. Brayden McNabb, Deryk Engelland, Jon Merrill, and Nick Holden are all acceptable NHL level defensemen, but between them, there’s one season of more than 30 points and they’ve played a combined 35 years in the NHL. So expecting to get anything more than they’ve already given to this point is unrealistic.

Schmidt turning back into the player he was the first two seasons would help (a lot), but even then they are still short. While Colin Miller had his faults, he put up 70 points in two seasons for the Golden Knights. They have not replaced that offense in any way and are in dire need of a trade to bring it back.

Finally, and I believe this to be a temporary problem, but the goaltending hasn’t been good enough. They simply aren’t getting enough saves on save-able shots. In addition, there haven’t been as many miraculous stops that this team has come to grow accustomed to having a Hall of Famer in the net for the past three seasons. It’s cost them goals, especially early in recent games, and it’s forced the team as a whole to play from behind, something that is challenging no matter where the game is being played.

This sounds incredibly doom and gloom, as it probably should after a run of four straight home games falling behind 3-0 and dropping three straight to end a homestand on a horribly sour note. But, even despite all of these flaws, the talent is still there for this year’s Golden Knights team to make a run.

The first issue is corrected by health. If the Golden Knights forward group is at full strength, it’s absolutely good enough to generate enough offense to win any playoff series. It’s a reality of the salary cap world that every team will have flaws. If the one the Golden Knights have to live with is scoring forward depth, that’s ok, they’ll just need lady luck to be on their side health-wise come April, May, and June.

The next is fixed by a trade, but it doesn’t have to be a significant trade. One the Golden Knights will eventually make. They’ve been lining up to add a defenseman since early in the season, and the time will eventually come. Of course, they’ll have to get it right and trade for the right player, but if they do, pushing everyone down a slot in the defensive pecking order will fix the problem in a hurry.

As for the final problem, that’s going to come down to Fleury. He’s going to have to be one of, if not the, best goalie in the playoffs for the Golden Knights to have a long playoff run. He can do it, everyone knows that. He just has to do it, otherwise nothing else matters. Struggling in January doesn’t matter as long as he’s at his best in April.

It’s not about effort. It’s not about complacency, and it’s 100% absolutely in no way because five guys are opening a restaurant, one has a beer company, and a few others have shot TV commercials. There are fundamental flaws to the Golden Knights roster and when they all rear their ugly head on the same night, you get what appears to be a listless performance against an average Columbus Blue Jackets team.

The Golden Knights will play better than they did tonight this season. But the way this team is built, it’s not going to be utopia every night. That’s fine, as long as the house is in order when the games matter most.

The house is not in order right now, but there’s still reason to believe it will be before it’s too late.