It’s somewhat of an unexplainable phenomenon in sports, specifically in hockey, but it happens and happens a lot for good teams.

Sometimes bounces don’t go your way. Through the first two periods, we had our chances but the puck didn’t cross the line. Then suddenly in the 3rd period, I don’t really know what happened, but boom, we got all of them. -Pierre-Edouard Bellemare

Three goals in a matter of less than five minutes. A deficit to a commanding lead. So what did happen?

He was joking (sort of) about how the training facility at Downtown Summerlin is 1,000 feet higher elevation than T-Mobile Arena. His teammates, and I, thought that concept was nuts, but that’s not uncommon when it comes to Nate.

Moments later though, he offered a much more believable justification, one that was echoed in the locker room.

Once our crowd gets into it and we score right away, it’s really hard for other teams to get back in. It’s kind of a like a hamster wheel it’s hard to stop it once it starts rolling. -Nate Schmidt

Obviously (the home crowd plays a major factor). When you have the crowd yelling at every single chance it makes you want to go on the ice and make something happen and hear those people yelling. They’ve been unbelievable all season, it’s amazing that it looks like this the first year. -Bellemare 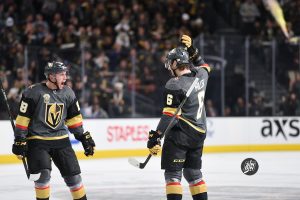 It’s not out the norm for this team. At home, the Golden Knights have scored goals within five minutes of each other 22 different times this season. They’ve done it in 14 of their 26 home games, and in those 14 games, they’re are 13-1-0. They’ve also scored within two minutes of another goal 12 different times and within 91 seconds three times at T-Mobile Arena this year.

I think our crowd had a lot to do with it. They really got behind our team when we scored that goal to tie it up. It was really noisy and loud. I think they just feed off of that. They did a great job. They were a big part of it. -Gerard Gallant

You just try to ride waves. Important for us all year has been rolling over lines and putting pressure on teams. When all the lines are scoring we are tough to play against. -Reilly Smith

Whether it’s waves, altitude, or the insanity of the T-Mobile Arena crowd, the Golden Knights are relentless, especially moments after they score.