Normally, you would simply assume that the best players start the game to allow them to get the most playing time, but in hockey that’s not always the case. With the Golden Knights, the nearly every player on the team has drawn into the starting lineup at some time or another. There’s no question the top line is Smith, Karlsson, and Marchessault, but sometimes Carrier, Bellemare, and Nosek hear their names announced as starters. 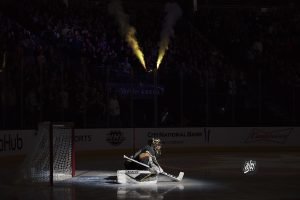 The guy in the net is really the only name that matters. (Photo Credit: SinBin.vegas Photographer Brandon Andreasen)

The standard explanation for this is that there would be a strategical advantage to start a certain line and certain defensive pairing. Normally that would be to match up the lines against what the opponents put on the ice.

However, with All Star head coach Gerard Gallant, he goes with a bit of a different method.

Sometimes it’s to reward guys for a real good game the game before. Sometimes it’s coach’s superstition. Marchessault’s line won four or five games in a row so you just start them. And then some night’s it’s who the other team starts. When you are the home team you sorta look at who they are starting. Some coaches match real hard, I’m not a big hard matcher.  -Gerard Gallant

To be honest with you though it’s a coin toss for me. -Gallant

So the next time you think, why the heck is that guy in there to start the game, just know…