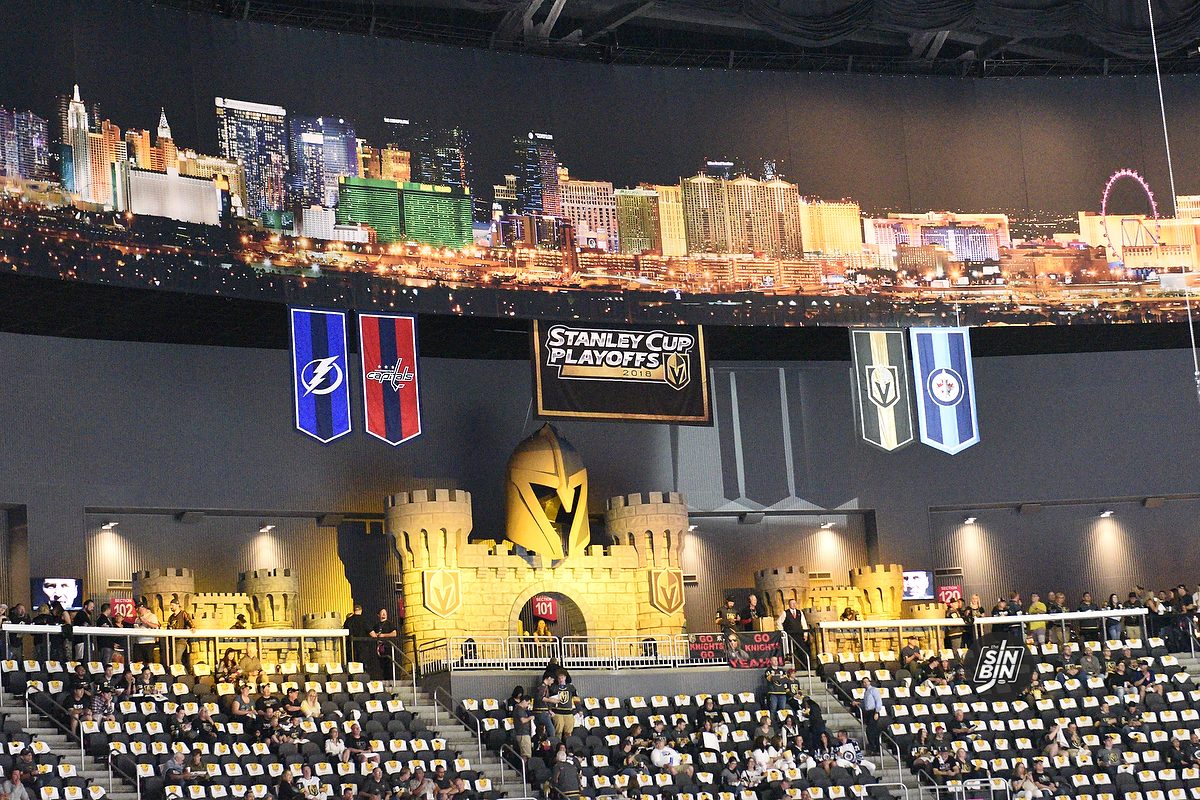 The next time you see those banners, there will only be two. (Photo Credit: SinBin.vegas Photographer Brandon Andreasen)

The moment the clock struck 00:00 in Winnipeg on Sunday afternoon the Golden Knights became Western Conference Champions and were headed to the Stanley Cup Final. However, the moment players, coaches, executives, and even fans had that actually sink in has been different for everyone.

The first time I noticed it was today when Nabber was sitting next to me and there the sticker was on the back of his helmet. I thought it was pretty cool because this is where we are at. -Nate Schmidt

Maxime Lagace told me for him it was when he saw the trophy in the locker room. Luca Sbisa said it kind of hit him while he was sitting at home a day or two later. Aside from Marc-Andre Fleury and James Neal who have been there before it had to hit every guy at some point.

Personally, it happened to me when I saw a Stanley Cup Final game puck for sale that said “Vegas Golden Knights vs. Washington Capitals: Game One.” There’s just something special about seeing the name on the actual object of them game.

Of course, I’m not going to be playing in the game, but like many who read this site, we’ve been around this organization longer than the players, longer than the coaches, and even longer than the GM. The next game the Vegas Golden Knights play will be in the Stanley Cup Final.

You hear it on TV, and people talking, and then you think, woah we are in the Stanley Cup Final, it’s crazy. -Luca Sbisa

It is crazy. Every kid who steps on the ice, every coach that stands behind the bench, and even every fan who takes their seat at a game, this is why you do it. We’ve all had the flash-forward in our head as to what it would look like, feel like, and what we would see. Now it’s here, and we all have to do our absolute best to soak it in, all of it.

I’ve been in the league for 10 years, and I’ve never come close to this. It’s the same way for a lot of guys on this team. You never know when your next chance will be, so we are not taking it for granted, we are here to win it. At the same time you can’t get caught up into the situation because it is the biggest stage in hockey. You just have to enjoy it. -Sbisa

No one reading this is going to play in the games but what Sbisa said holds true for us as well. You never know when the next chance will be, so don’t take this one for granted. Read every article, listen to every podcast, watch every TV show, buy everything, don’t hold back because this may never happen again. Even if it does, it will never be the same story.

The Vegas Golden Knights are four wins away from being an expansion team that goes on to win the Stanley Cup. They went from practicing in front of no one but the SinBin guy, his wife, and some janitors who were cleaning the windows at City National Arena (yep, this really happened in September) to a crowd of nearly 2,000 on a Thursday afternoon. From being exposed by another team to being beloved by hundreds of thousands, many of which don’t even know how the offside rule works. From #CoxBlocked the day of the first game to being watched by 40% of the valley.

A team wins the Stanley Cup every year, and inevitably in the history of the Golden Knights franchise they will be here again, but it will never be like this one. It’s more than likely no team in any sport will ever be where the Golden Knights are right now. So do everything you can to enjoy it.

It’s not so much that we didn’t think we could get here but it’s just it’s awesome. -Schmidt

You think, I’m about to play in the Stanley Cup Final, and you just take a moment to think, this is unbelievable. -Sbisa

It’s real though, and it’ll never be like this again.