The Goalie VGK Have Owned The Most Strikes Back 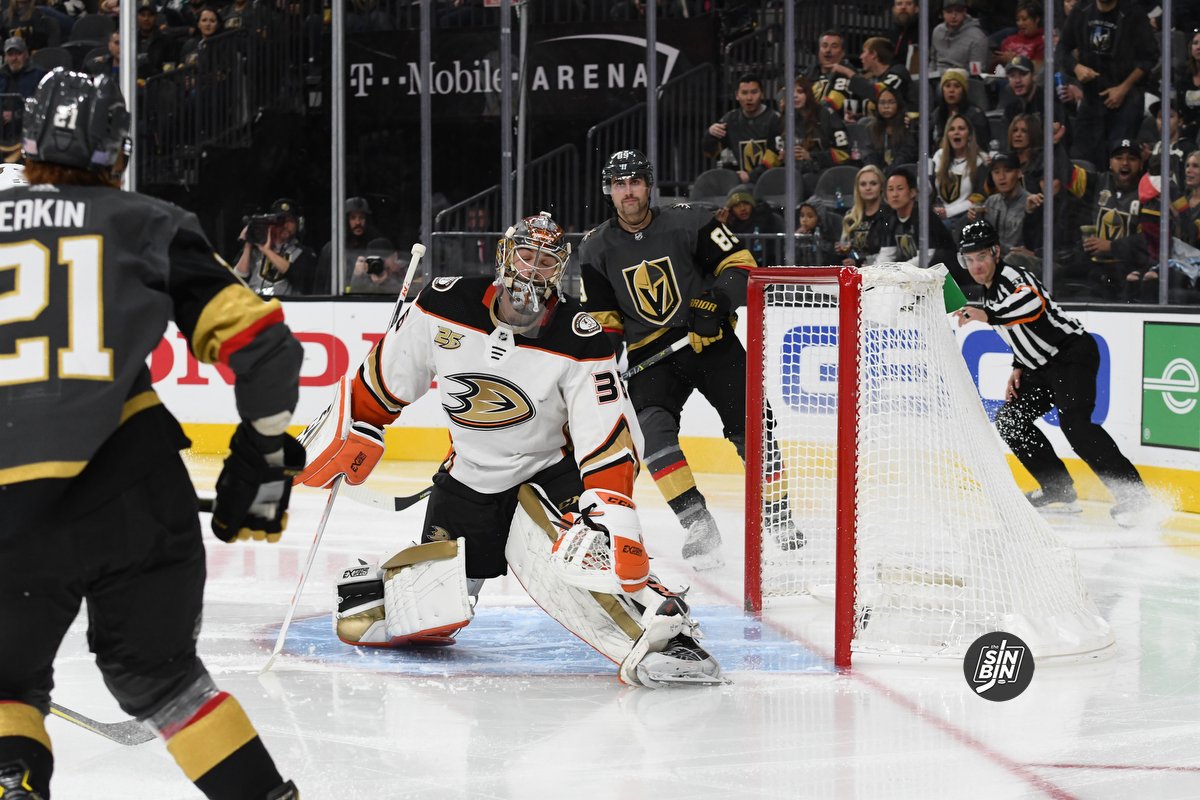 Over the course of the Golden Knights’ six seasons in the NHL, there’s no goalie in the league they’ve had more success against than Anaheim’s John Gibson. The numbers are astounding, especially considering the career pedigree of the 29-year-old American netminder.

Prior to last night’s game, the Golden Knights had a record of 20-3-0 with Gibson in the goal for the Ducks. Vegas had scored at least three goals on Gibson on 18 separate occasions. They reached four 11 times and scored at least five four different times.

Earlier this season marked the second time in Gibson’s career against the Golden Knights he was pulled from a game. Vegas put four goals on 18 shots and the Ducks lifted Gibson for the 3rd period. In 2018, Vegas scored three times on their first 12 shots against the Ducks goalie and he was relieved before the halfway point in the game.

In more than 1300 minutes against the Golden Knights, Gibson had recorded just one shutout, three wins, and allowed 76 goals, about one every 17 minutes of action.

Even in shootout, the Golden Knights owned him. Before last night’s game, Gibson stopped just three of seven Vegas shootout attempts in contests held in 2017 and 2021, both VGK wins.

He was on tonight. He was the best player on the ice. -Bruce Cassidy

Gibson stopped 49 of VGK’s 51 shots before keeping the Golden Knights on both attempts in the shootout. He racked up 2.54 goals above expected and only conceded on a shorthanded breakaway and a puck that was kicked by his teammate into the goal.

Despite shutting the Golden Knights out once in his career back in 2021, this was easily the best performance Gibson has ever posted against Vegas. He’s only been above .900 in 13 of his 24 career appearances and found himself on the losing end of 10 of them.

I don’t know if they had 50 shots or whatnot, but the next save was better than the next and the next. I hate to say I’m (not) surprised, but we are lucky to have that guy between the pipes, for sure. -Trevor Zegras, ANA forward

The win hardly made a dent in VGK’s dominance over Gibson though. His new record against the Golden Knights is 4-15-5 with a .905 save percentage and 3.41 goals against per game.

I don’t think we’ve fared too well against them in the last few years, so it’s nice to get a win. -John Gibson, ANA goalie

For the Golden Knights, it certainly feels like a lost point on the road against one of the worst teams in the NHL. However, sometimes you just have to tip your cap, especially to a guy you’ve gotten the best of for the better part of six years.