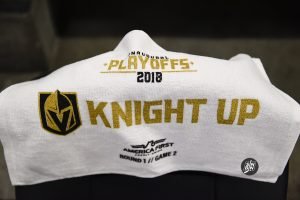 Expect the Golden Knights to have more Grade A chances this round, but getting them past the goalie isn’t going to be much easier. (Photo Credit: SinBin.vegas Photographer Brandon Andreasen)

It’s hard to face better goaltending than what the Golden Knights saw in the first round. Kings goaltender Jonathan Quick was in playoff mode from puck drop of Game One. Posting a 1.69 GAA, and allowing just seven goals in four games against Vegas, LA’s goaltender was remarkable. Next up the Golden Knights face Martin Jones. He may not have as recognizable a name as Quick, but he’s been right there with him all year long, and especially in the first round.

In the four postseason games each have played, Jones has nearly matched Marc-Andre Fleury’s numbers.

In his fourth postseason, Jones has 20 wins in 34 games started. In 2016, the Sharks goalie went on a tear in his first playoff as a starter. He led all goalies with 24 games started, 3 shut outs, and 631 saves.

The combination of Fleury’s experience and performance gives the slight edge to Golden Knights in net. However, scoring on Jones won’t be an easy task. In 34 postseason starts he’s only allowed 19 third period goals. In 44 games this season, Jones allowed three goals or less, but the Golden Knights have had his number. Jones allowed 11 goals on 99 shots in four games, good for a .856 SV%, and he was pulled in the 2nd period of the first ever matchup in Vegas.

Jones will have some pressure heading into the series with the Golden Knights. Over the summer San Jose extended the 28-year-old for six seasons with a $5.75M AAV, the same as Fleury’s annual salary. If the Sharks fail to advance skeptics will question if Jones is worth top dollar. Or maybe he’ll play great and lose like Quick did. At that point, critics can shut the hell up and finally tip their caps to the Golden Knights, but we all know, they probably won’t.