The Evolution Of Shea Theodore Is Complete 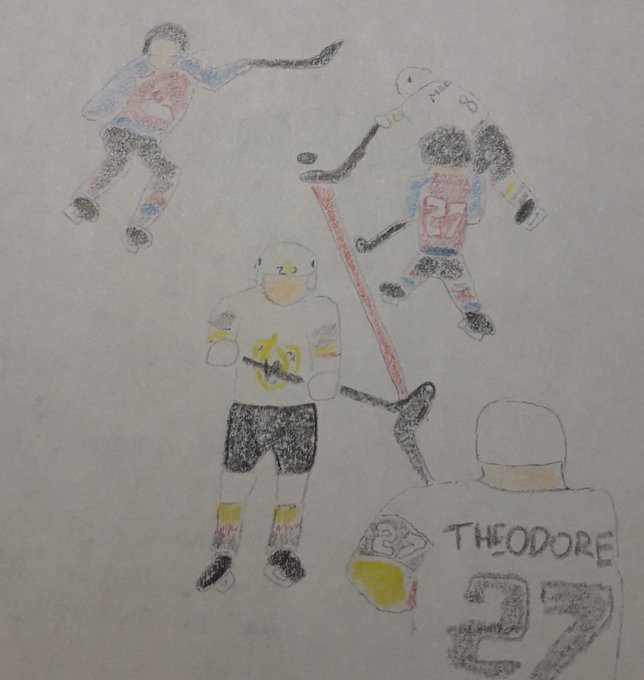 Alex Ovechkin’s “office” is in the circle on the power play. Patrice Bergeron’s is at the faceoff dot. Tom Wilson’s is in the penalty box. Now Shea Theodore officially staked claim to his new “office” after an incredible display of passing during the round-robin.

In the 3rd period of last night’s round-robin game against the Avalanche, Theodore found himself in a familiar place with the puck. He surveyed the ice, picked out Marchessault, and fired a 100+ foot pass, tape-to-tape to #81 which set up the go-ahead penalty shot.

It was kind of a broken play because Nate was coming out of the box. He was in the zone and he decided to change. Shea had perfect position and it was an unreal pass. -Jonathan Marchessault

You’ll have to use your imagination to fill in just how incredible this pass is, but here it is.

That was just one of Theodore’s many brilliant passes from that very spot. Here are two more from the same game. (There are a few others from the rest of the round-robin, but three gifs in the same article is already a little overwhelming.)

At this point, that’s pretty much what we expect from Shea. -Marchessault

But Theodore’s brilliance throughout the entire round-robin goes well beyond just stretch passes from his newly minted office. Posting four points on two goals and two assists plus an “assist” on the penalty shot goal, he was Vegas’ most dangerous offensive weapon behind the $9.5 million man, Mark Stone. Shea averaged 24 minutes a game playing against three of the best lines in the league, he recorded 11 shots on goal during the three-game stretch and was on the ice for seven Vegas goals, tied with William Karlsson for the most of any Golden Knight.

He has the ability to raise his level depending on the moment and how important the game is and I thought you saw that tonight. -Pete DeBoer

Theodore’s growth as a player with the Golden Knights has been tremendous since he was first acquired at the Expansion Draft. After coming from Anaheim where he competed in 20 playoff games as a rookie, Theodore didn’t even make the Golden Knights roster out of the initial training camp. (There’s a strong argument to be made that this was expansion team roster management, but it happened nonetheless.)

He put up 29 points in his first season in Vegas while playing just over 20 minutes a night in a slightly sheltered role. In the playoffs, he was able to tally 10 points in 20 games but had a tough series against Washington which left a sour taste heading into year two. Prior to that season, he held out of camp looking for a long-term deal, which he eventually got, but is starting to look like an incredible bargain for the Golden Knights.

The evolution of his game continued earning a bit more ice time and mustering up 37 points in 79 games in 2018-19. Then in the playoff series against the Sharks, he posted seven assists and eight points and laid the groundwork for what we’ve seen this year. 46 points total, 18 in 22 games under DeBoer, and an increased defensive role has seen Theodore unseat Nate Schmidt as the Golden Knights’ clear #1 defenseman.

Tonight, he was elite. I think this guy is going to be in the Norris conversation for years to come here. -DeBoer

Shea was good the first year with us but his game where it’s at right now, when you talk about top 10 defensemen in the league he has to be up there. He’s improved so much since the beginning of the Golden Knights and his game this year was unbelievable. He’s definitely a big part of our offense. -Marchessault

Theodore has become a household name to any and all Golden Knights fans, but the hockey world as a whole still hasn’t quite caught on.

That’s about to change though as the Golden Knights prepare for what they hope to be a deep playoff run. If they go as far as everyone in Vegas hopes, not only is he probably going to become a star in the eyes of the many more hockey fans, but he’s got a real shot finding his name inscribed on the Conn Smythe trophy along the way.