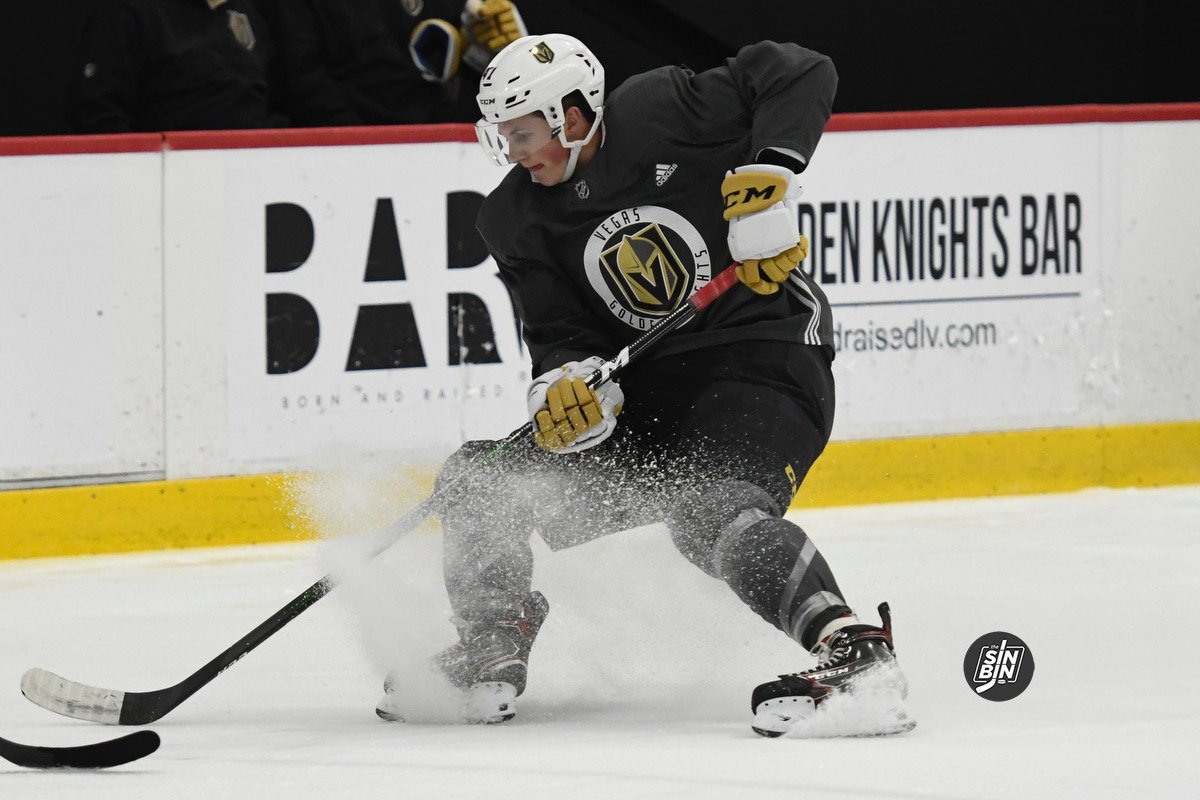 In the first round, when a team is ready to make a pick in the Draft, pretty much the entire front office goes up on stage, stands behind a microphone, and the GM announces the selection on live TV. The kid stands up, hugs his family then makes his way to take pictures with his new organization. All the while Draft analysts breakdown the pick making a big deal about each individual player selected in the 1st round.

But there are only 31 picks in the 1st NHL Round of the NHL Draft. There are 217 total selections, so the process is a bit different for the other 186 players that are selected, and in the case of one in particular, much different.

Ryder Donovan was not in Vancouver, instead, he was at the University of Wisconsin training facility with his brother Shay and friend (who is also at VGK Dev Camp) Mike Vorlicky. Donovan was sitting there wearing those giant recovery boots watching the Draft on NHL Network when the Golden Knights were on the clock in the 4th round.

Donovan loved Vegas throughout the entire Draft process and had already watched the Golden Knights make four selections that were not him. Then it was time for Vegas to make its fifth pick of the 2019 Draft, the 110th pick.

I was just really praying I could go here and I was watching and I knew they had a couple of 3rd round picks and I kinda thought my range was 3rd or 4th, and then that 4th round pick I was about to be pissed if I didn’t get called. -Donovan

He was called, but how he found out was not exactly the way you’d expect.

They were doing the interviews, I think Elliotte Friedman was up there and I thought I heard Donovan and I was like, oh my god! I was so pumped. -Donovan

What he heard, faintly in the background of an interview completely unrelated to the Golden Knights draft pick was correct, it was his name.

After the first round, each team uses a microphone on their table to announce their selection. However, the picks move so quickly that NHL Network doesn’t exactly focus on the actual announcements of the picks. So, what Donovan heard in the background of that Friedman interview was Bob Lowes, the Golden Knights director of player personnel announcing his name to the crowd at the Rodgers Arena in Vancouver. But he had to wait a few more moments until his name actually popped up on the screen to fully learn he’d just become a Golden Knight.

They were my favorite team by far, my favorite interview all year. I’m still in shock. It’s just Vegas, it’s such an unbelievable spot and there’s so much excitement. Everyone wants to play for Vegas. It’s kind of surreal right now. -Donovan

To make the experience even better, the very next round the Golden Knights selected goalie Isaiah Saville, one of Donovan’s closest draft eligible friends.

I had to pinch myself. We both were hanging out last night at the hotel and were saying, what are the odds, and it being Vegas, it’s even better. We kinda joked at the combine, we need to go to the same team. That’d be unbelievable, and then it happened. -Donovan

He’s a great kid, I love him to death, I’m fortunate enough to have been drafted to the same team as him. When I saw his name go up I had a huge smile and then when I saw my name go up I texted him right away. -Saville

Now it’s time for the boys to get used to the real Vegas.

The first night, me (Mick) Messner, (Mike) Vorlicki and (Mason) Primeau went down to the chophouse, T-Bones, at Red Rock. We walked in there in t-shirts and flip-flops and we sit down and looked at the menu, 80 bucks for chicken?!? We look at the waiter and we’re like, ‘we’re gonna go.’ So we went to Rubio’s. -Donovan

Donovan is writing a blog on his time with the Golden Knights in which he’s already documented the first few days in Vegas.

His love for Vegas and the Golden Knights is genuine, and the feeling’s mutual because the kid can really play too.