When Game 2 ended the Golden Knights universe was in a rage. Players were upset about the letting a game get away, coach was mad about the penalties, and fans were up in arms about the inconsistencies of the goaltender interference call. Everyone connected to the Golden Knights felt the series should have been 2-0, but instead it was 1-1.

When the sun came back up on Sunday, the universe had calmed, but not all parties. Players, they had moved on. Coach, he was ready for Game 3. Fans, well, they may never get over it. 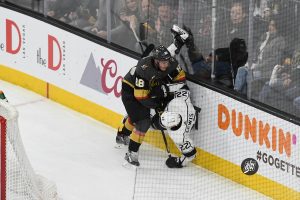 One day I’ll get to watch a Vikings game with Nate, that’ll be fun. (Photo Credit: SinBin.vegas Photographer Brandon Andreasen)

So I wondered, why is it that the people in the building can get over it just a few hours later but fans cannot. Is this what makes them special and allows them to make millions of dollars playing/coaching a sport while the rest of us sit back and watch? Is it that fans are just irrational? Or is it something different? So I found the guy I thought would have the best answer to this question, diehard Minnesota Vikings football fan and Vegas Golden Knights defenseman Nate Schmidt.

Schmidt knows both sides. He knows the heartbreak of watching his favorite team be wronged as he sits on the couch watching and he also knows what it’s like to be on the ice for a game-winning goal, only to have it taken away. First, we talked about it from the player perspective.

You can’t let it get to you because if you do, they’re already in your head. Because if you don’t get over the fact that the game continues to go on. If you give the ‘woah is me, I can’t believe that’s the call,’ then all of a sudden the next wave of attack comes and you’re on your heels. -Nate Schmidt

In other words, you let it go or you lose. He admits, though, it’s not the same as a fan.

(Laughter) It’s WAY harder as a fan. It’s different because you want every call. It makes it way easier as a player because we’re in those situations and we can relate to what’s going on. -Schmidt

I stood in the locker room on Sunday morning talking to all sorts of players about moving on, and the answer was consistent, but I had a hard time believing it was genuine because of how I knew I still felt, and how I knew every fan still felt. I thought they were saying it because it was the right thing to say, not because they actually moved on.

Believe me, I know Nate well enough to tell you that if the Vikings are wronged, he’d be right there with you feeling like you did when the Golden Knights were. He, and every player, are human and we all feel the same things, but situations dictate responses. It’s basically “fight or flight” or in this case “move on or sulk.”

The Golden Knights moved on and because they did, now you can too.