LOS ANGELES — The calendar turns the page to 2019 on Tuesday and for most of us it’s a chance for a fresh start, an opportunity to change our lives and routines and improve our overall lot.

However, if you’re an NHL team, it doesn’t quite work that way.

By now, the 31 teams have already made their bed, so to speak. And barring collapses or rebirths of epic proportions, the teams at the top and the teams at the bottom of the standings figure to remain in place over the second half of the season.

The idea that Tampa Bay is going to crater seems highly unlikely. The Lightning have dealt with their fair share of injuries yet they remain the NHL’s elite team. Toronto, which is second overall in the NHL and has the misfortune of playing in the same division as Tampa Bay, also doesn’t appear to be in any danger of an imminent collapse. But boy, wouldn’t it be something if the Maple Leafs did indeed nosedive and somehow miss the postseason? The reaction from Leafs Nation would be insane.

Instead, the most rabid fans are already planning a Stanley Cup parade down Yonge Street in Toronto.

What about the Golden Knights, you ask? Patience, SinBinners. I’ll get to your beloved team in a moment.

At the other end of the spectrum, the likelihood the improved Kings can rally and make the playoffs is slim. Even with the better effort they’ve given Willie Desjardins since he took over for John Stevens, the Kings appear to have dug too deep a hole to climb out of. Especially since Calgary continues to play at a high level and the Flames have responded well to first-year coach Bill Peters.

Ok, so now let’s talk about the Golden Knights.

Vegas is weathering the storm of injuries and have positioned itself to be a postseason participant. They have been doing it with key pieces missing (you know who they are) and the fact is the Knights are managing to fill the void with some very nice individual efforts. 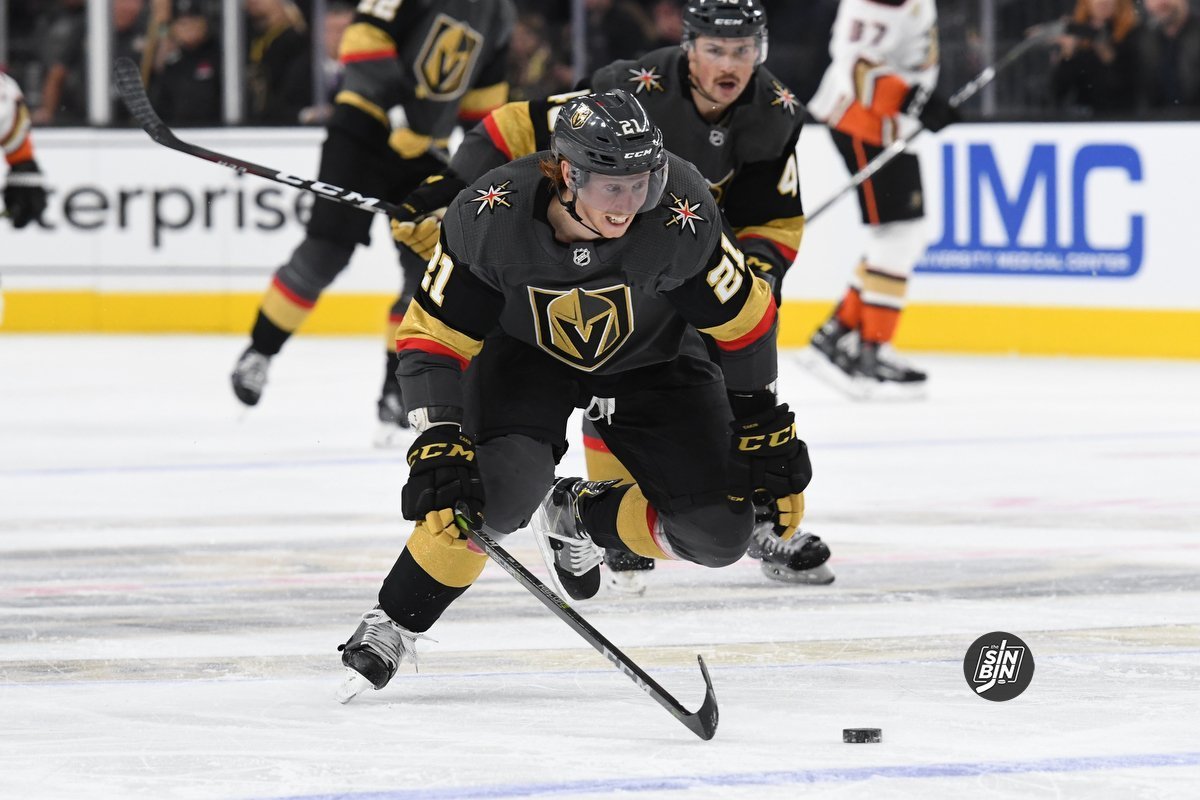 Cody Eakin had a strong first half as he filled in for Paul Stastny and Erik Haula on the second line. Will Carrier and Ryan Reaves have given the bottom six some unexpected scoring. Alex Tuch has emerged as a quality power forward. William Karlsson has found his mojo after a slow start.

The return of Nate Schmidt helped the entire team. Nick Holden’s play has gotten better as he has gotten more comfortable.

Brandon Pirri is making the most of his opportunity since being called up from Chicago (I’m not counting the Christmas “demotion” which was basically George McPhee using the rules to his advantage).

And of course, Marc-Andre Fleury is playing like an All-Star, which he should be when the rosters are announced in a week or two.

Add it up and you have a team that is going to be playing hockey the second week of April. How far they’ll go will depend on health, who the opponents are, slumps and streaks along with other mitigating factors.

With 48 points after Saturday’s impressive 4-1 win over the Kings at Staples Center, Vegas is in really good shape with one game still to play in 2018 (tonight against the Coyotes in Glendale) before the 2019 portion of the season commences. There’s no need to scrap the past and start fresh. Which brings me back to my original premise — this team is doing enough things right that there’s not a need for an overall New Year’s resolution.

I’d like to be in first place, but I’ll take where we’re at. We’ve had a lot of injuries,. We had a tough schedule. We’re in a good spot right now. We just got to keep building on that. We’re close to the top. We just have to keep battling. -Gerard Gallant

Individually, maybe a few guys will resolve to look to pick things up in the first three-plus months of 2019. Maybe Deryk Engelland would like to garner a few more points. Same for Ryan Carpenter, Oscar Lindberg, and Pierre-Edouard Bellemare.

Maybe the power play, currently ranked 15th after being near the bottom for most of the first half of the year, continues to generate positive numbers. The penalty kill, which is ranked No. 8 in the league has been a bright spot all season.

The best part? The Knights can definitely repeat as Pacific Division champions. They are very much in the mix for the top spot, currently occupied by Calgary with 50 points. The Knights and Flames have split the first two of four meetings with the other two games scheduled March 6 at T-Mobile Arena and March 10 at the Saddledome.

A lot can happen between now and then. But regardless of what transpires up to March 6, those will be two big games. As division contests, they’re essentially four-pointers and whoever can manage to sweep them will help their cause.

Same for San Jose, the team that’s also in the Pacific title mix, currently one point out of first. The Knights and Sharks still have three games against each other, the first coming Jan. 10 at the T. But it’s the two other games that will bear watching. They’re both in March (the 18th and the 30th) and both are in San Jose. Again, a lot can happen between now and then but these are the games that usually determine whether you win a division title or you don’t. 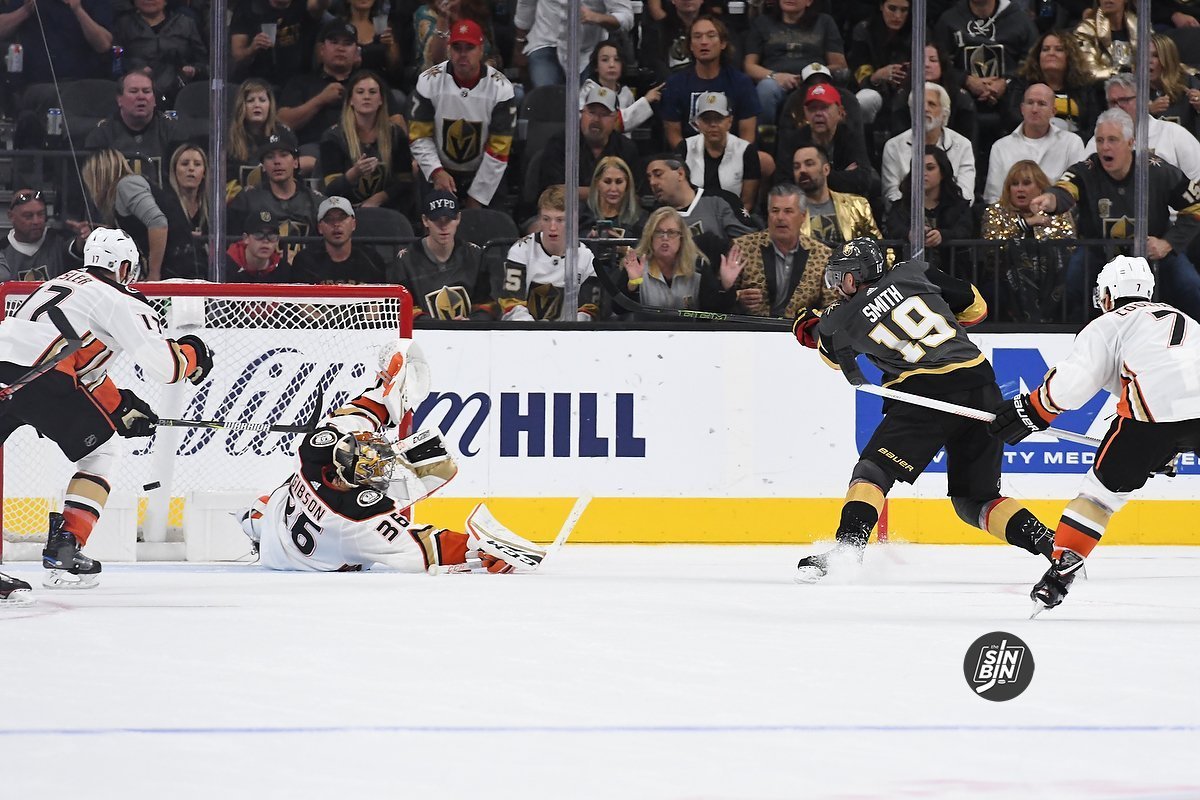 I’m not ready to eliminate Anaheim or Edmonton from the conversation when it comes to the division title. If the Ducks can keep goaltender John Gibson out of the trainer’s room, they’re going to be battling. Edmonton has responded to new coach Ken Hitchcock and the Oilers are playing with renewed effort on defense (their New Year’s resolution came early), though you wouldn’t have known it by Saturday’s woeful performance in getting thrashed at home by the Sharks, 7-4.

So it’s not like the Knights need to leapfrog over a bunch of teams to repeat as division champs. But they also have left points on the table the last couple of weeks, notably a week ago when they coughed up third-period leads to Montreal and L.A. and those two points they failed to gain in overtime would have helped vault them to the top of the division.

Still, as the 2018 portion of Year Two wraps up tonight in Glendale, Arizona, the players know they’re well within reach of repeating.

We’re in a playoff spot, right? We’d like to have more points, but we’re in good shape. -William Karlsson

I’d have to agree with Wild Bill. The Golden Knights are indeed in good shape as 2019 approaches. And that should make for a Happy New Year throughout Southern Nevada Monday night.