The Anatomy Of Cassidy’s Continued Line Shuffling Amidst Injuries 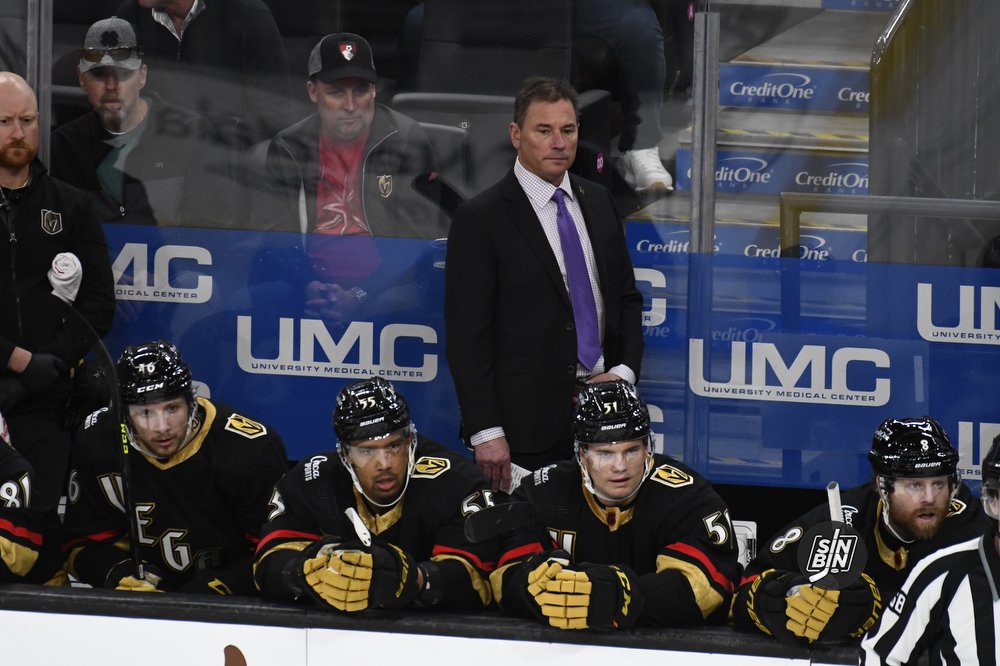 When the Golden Knights hit the ice tonight get ready to see yet another combination of forward lines. With the losses of Mark Stone and William Carrier, Bruce Cassidy has been searching for the right mix of players and until he finds it he doesn’t plan to stop.

In his media session today, Cassidy explained three components he’s been using to find a set of 12 forwards that can work on any given night.

First, he tries to tailor the lineup to the opponent. For instance, tonight’s lineup against the Red Wings will likely look a bit different than the one Cassidy rolls out Saturday against a stingier Capitals team.

Maybe this line combination against a team that we might get more rush opportunities against. So we can try and then go to Saturday’s game and sort through it from there. -Cassidy

The projected lineup for tonight has Phil Kessel up on the top line with Chandler Stephenson and Jack Eichel. The Misfits represent the 2nd line while Nic Roy, Paul Cotter, and Keegan Kolesar will man the 3rd line.

I thought (the Roy/Carrier/Kolesar) line has been consistent all year and Paul has a bit of Carrier flavor in terms of playing straight line and get to the net. -Cassidy

The second aspect he’s looking for is to have as many complete lines as possible, even if that only means three instead of four.

All of a sudden if you have three lines going, that was what we did to start the year, and then we sort through the other line and see how we can make that line best work. -Cassidy

William Karlsson, Jonathan Marchessault, and Reilly Smith represent a line he knows he can trust, follow that with Eichel and Stephenson together and he believes that line will contribute, so finding the best third line out of the remaining pieces becomes more important than attempting to maximize the collection of six remaining forwards. The decision to put Cotter with Roy and Kolesar is simply an attempt to replicate Carrier’s role there, which in theory would give them three strong lines.

Finally, the third aspect is giving different players the opportunity to move into envious positions up the lineup.

When you lose glue guys like Stone or Carrier off lines you have to kind of play it day by day and hope someone gets hot. That’s what happened with Amadio, he got hot for a while and it helped our team. He was playing with two good players and he capitalized. Maybe it’ll be Phil or maybe it’ll be someone else. -Cassidy

Cassidy notoriously called Michael Amadio “Plan E” while he was playing with Mark Stone and Stephenson earlier. That was an early indication of his willingness to shuffle through players as a third man with an established pair. When Amadio began to score, he left him on that line, even through the return of Eichel. However, that player has to stay hot to remain on the line.

Amadio’s streak came to an end and he instantly slipped all the way down the lineup to what is expected to be a seldom-used fourth line tonight.

All in all, while it may not appear it based on the constant shuffling of the lines recently, Cassidy is a believer in attempting to find chemistry and leaving it alone. However, as he continues to lose different key players off each line, he has to find new ways to maximize the performances of those healthy enough to be in the lineup.

He relies on matchups, proven line combos, and hot hands to try and make that happen. And if it doesn’t, expect to see a new group fairly quickly.