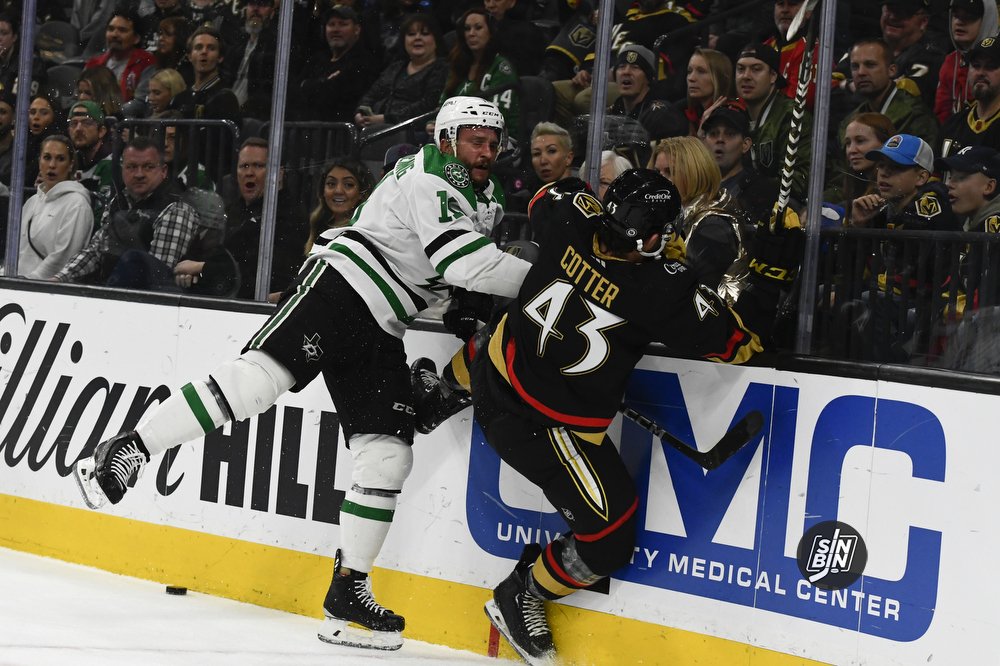 In the world of professional sports, there are a few telltale signs that concern is seeping into a team. The Golden Knights have seen two of them in the last few days.

First is the team meeting. We hear it all the time for teams heading in the wrong direction that following a big loss they lock the doors and hash things out. Typically the captain and a few others in the leadership group step forward and make it abundantly clear that the losing must stop.

With the captain sidelined for the Golden Knights, someone else had to do it.

Marchy stood up and spoke to everyone and said some powerful words. We all need to look in the mirror here. Here and there it’s okay to lose if the effort’s there but the effort wasn’t there. -Keegan Kolesar

Following the shutout loss at home to Dallas, one of the few remaining players from the inagural season stood up and had some choice words.

After the game I was super disappointed so I said my piece and now we’ll move on and see how we respond tonight. -Jonathan Marchessault

In a situation where Stoney is not there and we’re missing other players everybody needs to step up and I don’t think that’s what we’re doing and we’re losing because of it. I just think we need more 20-guy mentality. To win hockey games you need a full 60 minutes and a 20-guy mentality. -Marchessault

That message was seemingly received.

It’s powerful. He’s always such a positive guy, laughing and having fun, but just like the rest of us we were all pissed off and he chose the right time to speak up and speak his mind. Let’s not point fingers here, if you’re going to point one, point to yourself. -Kolesar

However, the results did not follow. Despite Bruce Cassidy feeling like the preparation and practices were good heading into the Detroit game, the Golden Knights fell again, which meant time for the next motivational moment.

Kelly McCrimmon was seen in the Vegas locker room after the Red Wings handed the Golden Knights their third consecutive loss for the first time this season.

The GM has made appearances in the room following games, including the last time I personally saw him after the win in Seattle that sent VGK to 3-0-0 on the season. It’s possible he visits following every game and the media just aren’t in a position to see him, but the timing of this one sure seems to be more than just a coincidence.

The Golden Knights are slipping down the standings and they understand the challenges of the schedule coming up. Couple that with the injuries and it’s going to be nearly impossible to block out last season from the memory bank.

The pressure is on.

Now they need to find a way to transform these off-ice gestures into on-ice ones. And, it needs to happen fast, otherwise, the next one will be even louder and more intense.