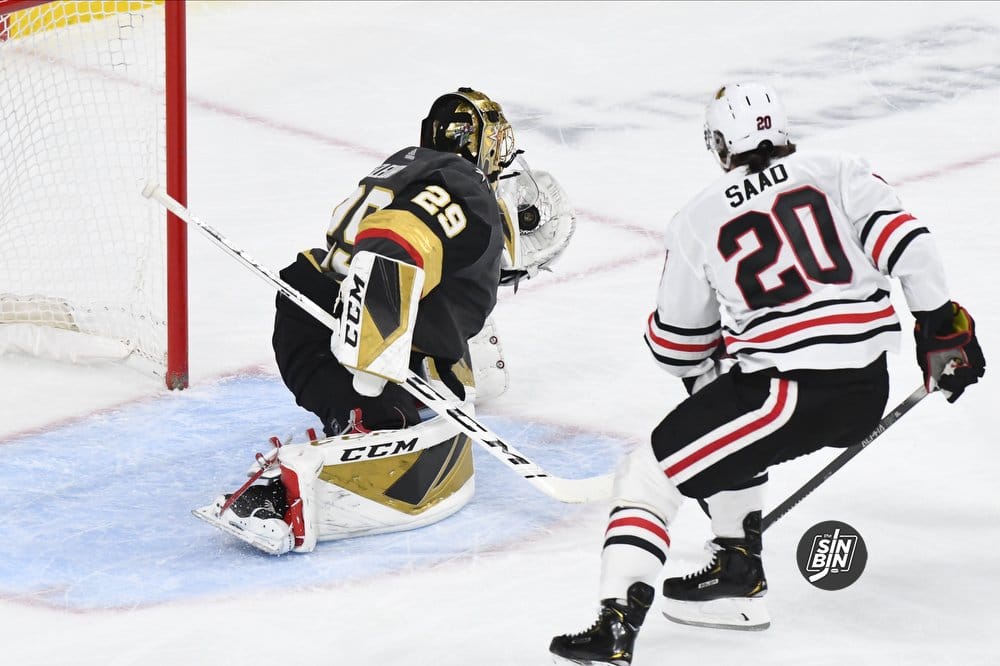 The Golden Knights have a salary cap problem and now that we have a set date for the 2020-21 season to begin there’s an official deadline in which that problem must be solved.

Luckily for Vegas, the new COVID-necessitated roster rules should stand to assist the Golden Knights in navigating the muddy salary cap waters this season.

As it currently stands, according to CapFriendly.com, the Golden Knights projected starting lineup (with backup goalie) comes in over the cap by a little more than $100,000. By rule, all teams must be cap compliant by the day of the first game on the league schedule, this year being January 13th. Thus, something has to give.

Normally, Vegas would be in a bit more trouble than they currently are because solving the cap issue would mean sending a player or players away from the team completely and down to the AHL. Plus, they’d be left without any healthy scratch players, which is never ideal. However, with the invention of the taxi squad, the Golden Knights will be able to have players practice with the NHL team, but not count against the cap.

Due to fear of positive tests forcing players out of games at the last minute, the NHL is allowing each team a taxi squad of four to six players. These players will practice and travel with the team but will only be eligible to play in games in the case of an emergency. Technically, the taxi squad players are not part of a team’s active roster, and instead will be treated financially like they are in the AHL. (They are slated to receive NHL per diem.)

Thus, at any time, Vegas is allowed to keep six players, which must include a third goalie, around the NHL team without them counting against the cap. In the past, the Golden Knights have had to yo-yo players back and forth to properly manage the cap. We’ve seen it with guys like Nic Roy, Brandon Pirri, and Jason Garrison, and the first season Alex Tuch, Shea Theodore, and Vadim Shipachyov were sent down before Opening Night to satisfy the cap, but this year they can do it on paper and keep the players around to practice and even travel with the team to road games.

So, let’s talk about exactly how it works, what the Golden Knights can and can’t do, and then lay out a few options they might take to clear the final $100,000 in cap space prior to their first game on January 13th.

The taxi squad is essentially just an extension of the AHL. Any rules that apply to sending a player to the AHL, also apply to placing a player on the taxi squad. In other words, waivers are required. The list of waiver exempt players for the Golden Knights this season is limited; Cody Glass, Nic Hague, Logan Thompson, and Dylan Ferguson are the important ones. These players can be freely shuffled from the active NHL roster (counts against the cap) to the taxi squad (doesn’t count against the cap) at any time and as often as the Golden Knights would like during the course of the season. Of course, to play in a game, a player must be on the active roster, so expect a ton of shuffling for at least a few of those guys.

Next we have the players who do have to clear waivers, which is everyone else. Names like Oscar Dansk, Carl Dahlstrom, Jake Bischoff, Patrick Brown, and Keegan Kolesar come to the forefront here. Once a player clears waivers, they are able to return to the active roster for 10 games or 30 days before they must clear again. The taxi squad will make that 30 days number useless as they can be shifted back and forth on every off day, so really it means any player that clears has 10 NHL games to play before he must clear again.

That’s the main gist of it, so let’s get back to what the Golden Knights might do to clear their cap space.

First, we’re looking for an injury. If any player expected to be in the regular starting lineup is injured and will reasonably be out for more than 10 games, Vegas can shift waiver-exempt Cody Glass to the taxi squad on January 13th to become cap compliant, then swap him with the injured player and use long-term injured reserve (LTIR) to exceed the salary cap. That’s the easiest solution, but everyone is hopeful that’s not the case because we’d rather have a healthy team come Opening Night.

That brings us to the other option, which is to shift a player expected to be in the starting lineup to the taxi squad and replace him with a cheaper option that will suit up on Opening Night. Here’s the lineup I’m envisioning the Golden Knights would like to use.

But, that lineup is not cap compliant. Those 20 players combine to make more than the $81.5 million the NHL allows. So, we’ve got to pick one to switch. The first names that jump off the page should be Nosek, Reaves, and Holden. These are all players making more than the NHL minimum salary, but could be replaced without massive recourse for a week or two while the season gets underway. The problem is, every player in that group aside from has to clear waivers. To clear a measly $100,000 in cap space, it’s unlikely the Golden Knights will want to risk losing a player expected to be in their every day starting lineup. So, this isn’t a great option at all.

The next name is Cody Glass. As a waiver exempt player making more than the league minimum (by a convenient $163,000), Glass could easily be shifted to the taxi squad and replaced by someone like Brown, Kolesar, Danny O’Regan, Dylan Sikura, or any other projected AHLer making less than $750,000. This would achieve the goal of clearing cap space, but it would leave the Golden Knights without a key cog in their 2020-21 plans. It’s another option, but also not a particularly good one.

This brings us to the final option, the backup goalie option. When January 13th rolls around, it’s likely Robin Lehner will get the start between the pipes for the Golden Knights. The plan, as is in pretty much every NHL game ever, will be for Lehner to start and finish the game, thus rendering the backup for that night useless. So, if the backup isn’t going to play, why have $7 million Marc-Andre Fleury serving that role? Instead, he could be replaced by Dansk, Thompson, or Ferguson.

One important thing must take place for this to happen though, Fleury must clear waivers. Considering the rumors for the last four months that Vegas was trying to give Fleury away and teams were asking for multiple draft picks to take him, it’s reasonable to believe he would indeed clear waivers. If that happens, $1,075,000 is subtracted from his salary that counts against the cap. Replace him with any of the three other goalies all making less than $1 million, and voila the Golden Knights are cap compliant.

Naturally, Fleury is now on the taxi squad and not eligible to play in a game for the Golden Knights, but at least their under the cap. Then they could wait for the LTIR option to come available or use the previous Nosek, Holden, Reaves, or Glass options for a night when they want to give Lehner the night off.

You’re probably asking yourself, why not just put Lehner on the taxi-squad on the days in which Fleury gets the start? It’s a good thought, but probably not feasible because of the waiver requirement. If Lehner is placed on waivers, it’s hard to believe all 30 other teams would pass on him and his affordable $25 million five-year contract.

So there you have it. Simple, right?

No matter which path the Golden Knights choose, the taxi squad is going to come in handy before the first puck is even dropped on the season. They’ll probably continue to take advantage of it over the course of the year too in order to accrue more cap space and make another trade deadline splash.