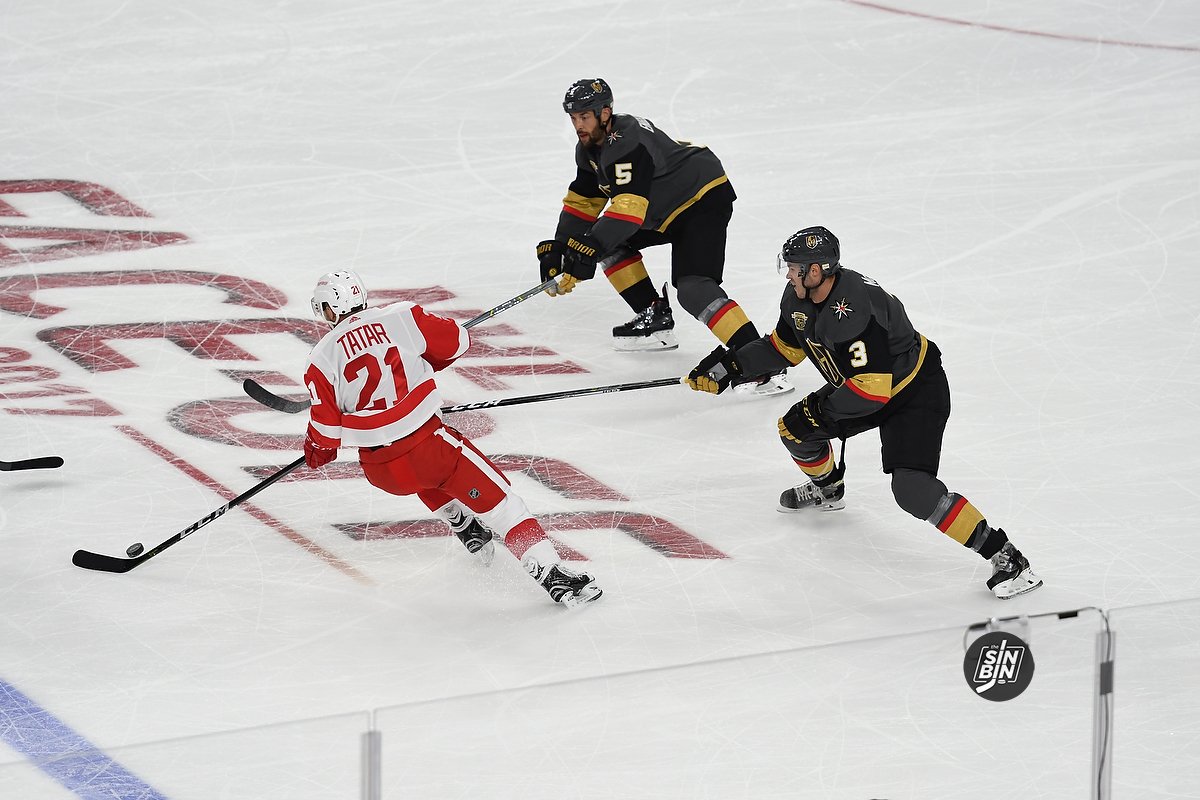 Insurance for the future, and help for now? That’s the perfect package for McPhee. (Photo Credit: SinBin.vegas Photographer Brandon Andreasen)

By now fans have to believe in George McPhee’s vision. He’s presented a first-place team, a projected Jack Adams winning coach, and an aggressive front office mentality. While the sensational headlines were all about Ottawa defenseman Erik Karlsson, the Vegas GM worked on an important last-minute insurance deal.

VGK was deep into Erik Karlsson trade talks up to the final minutes before the deadline and when it became clear it wasn’t going to get done, VGK traded with DET for Tomas Tatar.

Newly acquired winger Tomas Tatar wasn’t a replacement for not landing Karlsson. Instead, McPhee traded for a player who could help win now and later. Later being the key.

Tatar comes in, that all but solidifies that James Neal is not coming back. -Nick Kypreos, Sportsnet

McPhee was in a real win-win situation. He elected to make three deadline deals but could’ve easily stood pat.

In my eyes, McPhee’s stock rose even higher after the Tatar deal and the Karlsson rumors. I’m not saying his efforts weren’t genuine but you couldn’t have pitched a better marketing plan.

The Ottawa Senators will tell you ‘no they were not close to a deal.’ Whatever offer was on the table from the Vegas Golden Knights … was not sufficient and wasn’t close to what Ottawa would consider acceptable doing a deal. -Bob McKenzie, TSN

Some analysts were puzzled when they heard McPhee had given up three draft picks to receive Tatar. However, when you calculate age, production and term, a player like Tatar was more valuable to the organization, especially when the team is facing tough decisions this summer.

Tatar doesn’t quite have the power numbers that Neal does but to this point in his career he’s not far behind. Through 407 games, the Czech has 115 goals and 107 assists. After Neal’s first 413 games he scored 161 goals and 154 assists. Breaking it down even further, the comparison gets closer. Neal averages .38 goals per game in his career, Tartar has averaged .28 goals per game.

The challenge for Vegas is the need to grow and win at the same time. With his skill, cost, and term the Tatar trade allows for both. The newest Golden Knight makes $5.3 million AAV for the next three seasons. Neal will be offered much more to play somewhere else. Also, keep in mind David Perron would like to get paid as well.

Yep, McPhee had the future in mind when he traded for Tatar.