The newest member of the Las Vegas staff comes to the team from Ottawa where he was the chief amateur scout for the Senators. Bob Lowes also spent an extended period of time in the WHL as a head coach including a nine year stint coaching Kelly McCrimmon’s Brandon Wheat Kings.

Lowes is the assistant to Vaughn Karpan who was also an amateur scout prior to joining the Vegas front office.

During his time as chief amateur scout the Sens selected Thomas Chabot and Colin White in the first round in 2015 and Logan Brown this season. None of the three have made it to the NHL level. While a scout in Ottawa the Senators also selected Nick Foligno (son of Las Vegas pro scout Mike Foligno), Erik Karlsson, Jakob Silfverberg, Robin Lehner, Mika Zibanejad, Jared Cowen, and Curtis Lazar. But most notably he is credited with the selection of Mark Stone with the 178th selection in the sixth round of the 2010 Draft.

Lowes is 53 years-old and has been coaching or scouting since 1984 when his short playing career ended. He continues the trend of GM George McPhee preferring scouts with long resumes in the NHL and/or WHL. He is one of the few who was directly poached from another organization, which is likely why he has the fancy title rather than being named scout like much of the staff.

Once again, all signs point to this once again being a good signing as the organization continues to build what appears to be a dream front office. They have 261 days until the Expansion Draft and just a few more until their first Entry Draft. Hopefully this players on ice look as promising as the staff who assembled them off it. 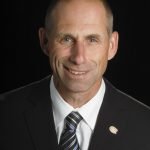