First Team Eliminated In 2017-18? You Already Know Who THN Picked

Here at SinBin.vegas we are well aware that the Golden Knights aren’t going to be hoisting the Stanley Cup in 2018. We are even pretty sure they aren’t going to the playoffs. But because we don’t always want to be the bearers of bad news, we figured we would let someone else do it today.

The Hockey News’ Sam McCaig wrote an article predicting the 15 teams that won’t make the playoffs in 2017-18. Not surprisingly, the Golden Knights were in this group, but McCaig was even willing to go one step further.

Here are the 15 teams that are (much) more likely to win the draft lottery than the league title:

The very first team out of the playoff picture, and the first team (much) more likely to win the lottery than the Cup.

Vegas loves a long shot, but the expansion Golden Knights will be wandering around the desert for at least a few years before they can contemplate the possibility of the post-season. -Sam McCaig, The Hockey News

Because we are a hybrid news/fan/bad jokes site, we’re obligated to call this is a DESPICABLE piece of literature and can’t believe someone would even begin to say anything other than “best expansion team ever.” However…

Nothing McCaig said is wrong, or even really all that close to being wrong. In fact, he’s kind of, dare I say… right. And actually, there’s a lot more chin scratching stuff in the articles trying to apologize for the Golden Knights than the ones saying it like it is. Compare this…

END_OF_DOCUMENT_TOKEN_TO_BE_REPLACED

We’ve seen so many expansion mock drafts over the past year that it’s almost sickening. Some mocks have one viable player along with a fairy tale roster. Others pick a team with a salary cap pushing the upper limit. Some don’t even follow the rules. Finally, The Hockey News broke the trend and came out with a mock draft that makes sense in their Expansion Issue. THN’s expansion roster had talent, youth, veteran leadership, cap-eaters and inexpensive risks. It’s close to the formula we expect George McPhee will use in June. To see the whole thing, you’ll have to pick up an issue, cause it’s no where to be found on the Internet.

THN’s formula seemed to put a surprisingly low on value goaltending. THN drafted Eddie Lack, Calvin Pickard and Malcolm Subban. One’s injured and the other two are unproven in the NHL. Altogether, the three goaltenders have started a total of 153 games and let in a combined 447 goals. Terrible. Luckily, Vegas wouldn’t be stuck with any of the three chosen. Lack and Pickard’s contracts come off the books after the Golden Knights inaugural season while Subban is an RFA after this season. All three are goaltenders with unappealing stats, inexpensive expiring contracts, proving THN had one thing in mind, mitigating risk between the pipes.

Lack started his first game this week after a two concussions. With Carolina in a fight for a wild card, Lack and the Canes lost 5-0 to the streaking Capitals. A tough assignment on Lack’s first day back.

I felt like I was chasing the game at first, I was all over the place. Maybe I wanted it too much, you know. I felt like I settled down in the second and made some good saves, and they got some good goals in the third. It’s never fun letting five goals in, for sure. One part of me feels like it’s fun being back and playing and everything, and one part of me is disappointed. -Eddie Lack, Carolina

END_OF_DOCUMENT_TOKEN_TO_BE_REPLACED

If you know hockey, you know The Hockey News. Probably the world’s leading hockey magazine has unveiled a special issue focused exclusively on the Vegas Golden Knights.

What happens in Vegas…comes to the pages of THN! We’ve got the Golden Knights covered from top to bottom in our Expansion Issue: mock draft, GM George McPhee’s plan, a blueprint for how to build a franchise and much more. –TheHockeyNews.com 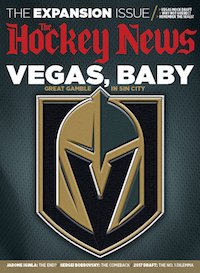 If not just for the fact that it’s a collectors item, but also the wealth of information that will be packed into the magazine, this truly is a must own for any Vegas Golden Knights fan.

Magazines are expected to be shipped on January 23rd. Each copy is $4.99 and is available for preorder now through The Hockey News’ online store.