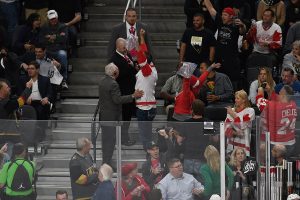 The only other major fan base to experience success in Vegas. (Photo Credit: SinBin.vegas Photographer Brandon Andreasen)

It’s been a tough ask to beat the Golden Knights once for teams in the NHL, never mind twice. Edmonton is the only team in the NHL that’s picked up four points in two games against the Golden Knights. Beyond the obvious (the McDavid is good), what’s behind the Oilers successful strategy?

I just think we play pretty hard against them. They’re a good hockey team over there. They’re fast, they’re tenacious. We got our breaks. We knew they were a heavy stand team, and we backed them up a little bit. -Pat Maroon, Edmonton forward

Maroon had a productive Saturday night in Vegas. The eight-year veteran had the game’s opening goal, and assisted on Drake Caggiula’s game tying goal.

We got our chance off the rush to tie it up, and Nursey pops one home. I think off the rush we did a really good job, backing them off just a tad and pushing the forward out. -Maroon

Not only did Edmonton pick up a much needed two points, but they beat the Western Conference’s best team after beating the conference’s worst the night before. It gives the Oilers some positive momentum for as they begin their bye week.