Tonight marks the first time the Golden Knights will play a game at T-Mobile Arena on the Vegas Strip. So, to help you from wanting to hurt someone before you get into the arena, we’re here with a transportation and parking FAQ to answer all your questions and take the guesswork out of getting to the game.

What are the official parking options with the Golden Knights?

Parking is available at the garages at New York New York, Aria, Excalibur, and MGM Grand. If you purchase a parking pass prior to the game, the price is $20 (NYNY/Aria) or $15 (Excalibur/MGM). If you wait until the day of the game, parking is unavailable at NYNY and Aria, and it’s $25 at Excalibur and $20 at MGM Grand. To purchase parking prior to a game go here.

Where are these garages?

The NYNY and MGM Grand garages are the standard ones always used for the casino. The Aria garage is located directly off Frank Sinatra Boulevard (it is NOT the same garage as the one with the entrance on Las Vegas Boulevard). The Excalibur garage is the new one just south of Tropicana Avenue. Click this for a map.

END_OF_DOCUMENT_TOKEN_TO_BE_REPLACED

SinBin.vegas Podcast #21: The State Of The LVRJ

The Las Vegas Review Journal was sold to Sheldon Adelson and has been hemorrhaging excellent journalists since. Ken and Dana dive into the state of the RJ and how Las Vegans, Americans, and people around the world should view the newspaper now. Hosted by Ken Boehlke.

MGM Finalizes Pay-For-Park System, It’s Bad, But Not That Bad

Well, we knew it was coming, and now it’s here. MGM officially unveiled their new pay-for-parking system and while Las Vegas locals are safe for now, in a few months we’ll become chopped liver just like the everyone else.

When T-Mobile Arena was nearing its completion rumors began swirling that all MGM properties would indeed begin charging for parking in their garages. However, the terminology used was always “for overnight parking.” It turns out, that wasn’t really the case and our nightmare of having to pay even while going out for dinner has been realized.

Starting on December 29th, 2016 for locals and June 6th, 2016 for out-of-towners, MGM’s going to start taking our money before we ever even make it in to the casino. (Well, technically you pay on the way out, but you get my point) 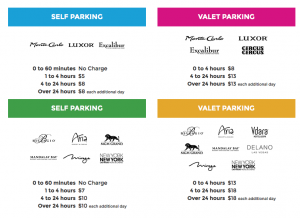 $5 to visit the casino for up to four hours isn’t terrible, but I can tell you right now, I won’t be the only one parking at a Caesars, Wynn, or Sands property to circumvent the fee.

Event nights at T-Mobile Arena are going to stay the same as they have through the first month of the arena’s existence. You’ll have to pre-pay to park at New York New York or Monte Carlo, while the rest of the surrounding hotels will use their standard system (expect this to change at some point).

As far as this relates to hockey, it’s not the absolute worst scenario, as $10 pre-paid parking directly next to the arena, or $4-$8 across the street is not terrible, but it’s still hard to grasp the idea of paying for parking here in Las Vegas.  I’d expect a slight discount for season ticket holders who pre-pay the entire season as well.

We’ll be constantly on the lookout for ways to circumvent parking fees, especially on game nights. So far, here’s what we’ve got. (This will be updated when we have new methods)

If you have other ideas for us, let us know in the comments or email them to ken@sinbin.vegas.

Remember the nightmare we thought traffic and parking would be at the arena tucked way back in between New York New York and Monte Carlo? Yeah, you can wake up now, cause the nightmare is over.

Parking was a piece of cake directly in front of the venue (NYNY, Monte Carlo), down the street either way (Luxor, Excalibur, Aria), and across the street (MGM Grand, Tropicana). And even more impressively, there was almost no traffic at all after the event. Like literally, none. I pulled up the map, and couldn’t find a single stretch of “red” traffic anywhere within five miles of the Strip.

I parked at MGM Grand, sat in the upper deck, left the arena with the crowd when the show ended, and it took me less than 30 minutes to get from my seat to my car and out of the garage.

Jason parked at Aria and had a similar situation.

It took me about five minutes to reach the Toshiba Plaza. After the concert, I pulled out the parking lot with little traffic. I drove west on Harmon, and after passing the Cosmo I was clear. From there I head up Trop, and was home in fifteen minutes. -Jason Pothier, SinBin.vegas

END_OF_DOCUMENT_TOKEN_TO_BE_REPLACED

Here at SinBin.vegas we love things that are distinctly Vegas. Things like the Rat Pack, luxurious food, bottle service, stripper cards, and much more. One such thing is free parking. Aside from the nightmare that is parking Downtown, finding a spot in Vegas is as easy as losing your rent money at the slot machines (it might be easier). But there have been some grumblings about changes, and that has us angry.

#MGM is not confirming nor denying that they will begin charging for parking on the #LasVegasStrip once the arena is finished. #8NN

In other words… “MGM will charge for parking when the arena is finished.”

One of our all time favorite Las Vegans, County Commish Steve Sisolak makes an interesting point.

We got @ClarkCountyNV Commissioner Steve Sisolak’s take on #freeparking. He says there’s no arena in U.S. that has free parking. #fact

There are much better ways to take our money. Concessions, souvenirs, heck, anything else. We are all going to spend our money when we come to the games, it’s what sports fans do. There’s no need to change something fundamentally awesome about the city we love just so MGM can steal $15 extra dollars from our pockets.

This change would frustrate one single group of people. Locals. The one group of people the team absolutely needs to keep happy to have success. Step up Mr. Creator, and put an end to this madness. We’ll be there, we’ll spend our money, just don’t take it on something petty like parking.

Official Statement from MGM: “We do not comment on rumors or speculation.” #8NN #freeparking