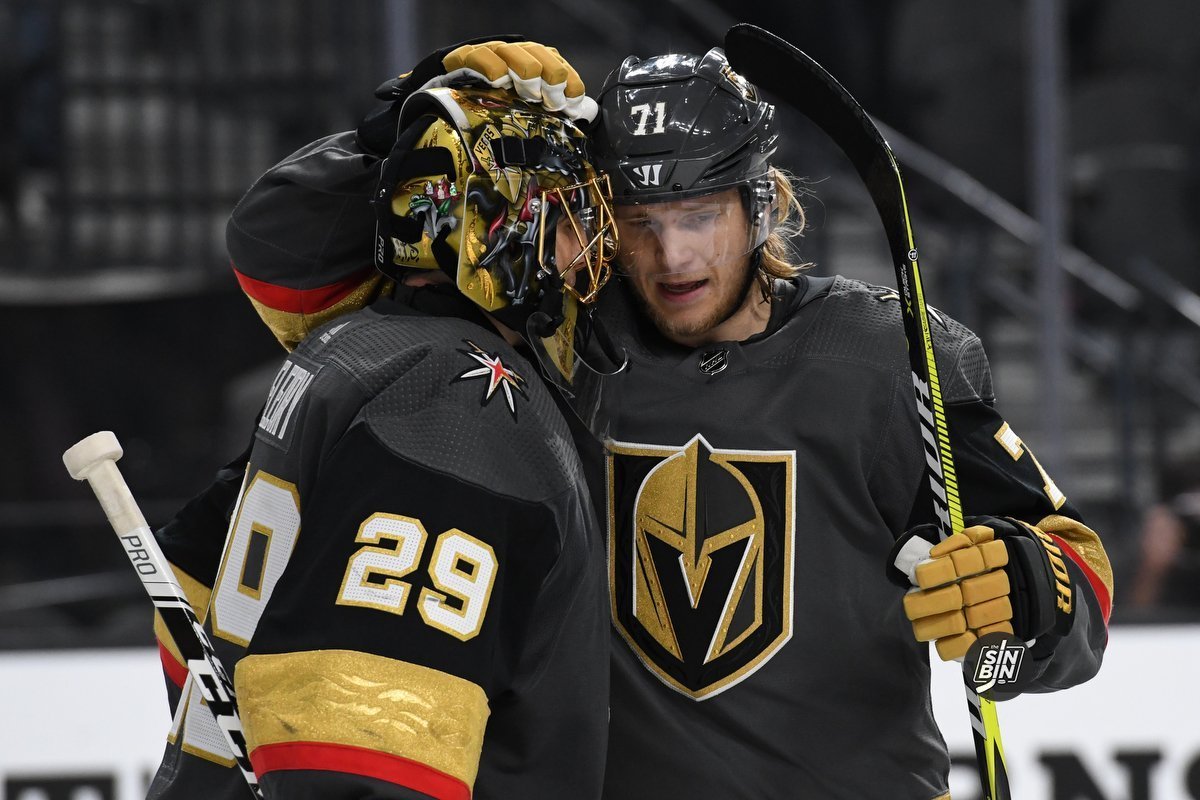 The offseason is going to be an interesting one of the Golden Knights. Not only do they have four players from the NHL roster set to become unrestricted free agents on July 1st, but they also have seven other UFAs, 10 RFAs including William Karlsson, Nikita Gusev, and Jimmy Schuldt, and they are pushing up against the salary cap.

There are plenty of moving parts and literally thousands of options on the table, but we’re going to take an early stab at exactly what may happen anyway.

And because we are so familiar with the questions (because you all keep asking them incessantly), we’re going to do it in an FAQ format. So, here we go.

What do you think will happen with each of the UFAs?

There are four major ones, Bellemare, Engelland, Pirri, and Carpenter. Of the four, there’s only one who is close to a sure thing one way or the other, and that’s Brandon Pirri. He almost certainly won’t be a Golden Knight next season. He made it clear on exit day that his number one priority in his next contract is an opportunity to play in the NHL. Vegas likely doesn’t offer that and even if they do, it’ll be at a minimum price. Expect someone to pony up something like $1-$1.5 million for Pirri and him to find himself in on an opening day roster for the first time since 2016.

The next one that I’m most confident on is Deryk Engelland. I expect the Golden Knights to once again sign him to a one-year contract worth somewhere around $1.5 million. If Engelland isn’t planning on retiring, which it does not appear he is, he’ll remain in Vegas. Whether he’s in the lineup on opening night, that is still a question.

As for Carpenter and Bellemare, in both cases it likely depends on what George McPhee does with the rest of the roster. Carpenter seems more likely to stay in Vegas because there will be less of a demand for him around the league, but if one team steps up and promises him a roster spot, he’ll probably head elsewhere. With Bellemare, it comes down to center depth in Vegas. If Haula isn’t a center, it makes sense to keep Bellemare, but if he is, there’s really not room for Bellemare unless they trade Cody Eakin. If I had to guess, I’ll say Bellemare is a fourth line center for another team when the dust settles on free agency.

What does William Karlsson’s contract end up looking like and is there a legitimate concern that he’s not a Golden Knight soon?

Well, first off, this what we know will happen. The Golden Knights will extend the qualifying offer of $4,750,000. Karlsson won’t sign it. Instead, he will file for arbitration and a hearing date will be set for late July to early August. From there, it truly is anyone’s guess.

I do believe both sides have an appetite to come to an agreement on a long-term deal, however, I also believe they aren’t horribly close on the dollar amount. Karlsson could reasonably command north of $7 million while the Golden Knights would probably prefer he takes something closer to $5 million.

In the end, I’d guess he lands on a bridge deal that leans towards the Golden Knights side. A three or four-year deal would make the most sense for the player as he would collect a solid payday, would stay in Vegas which is best for him for multiple reasons, and he’d be eligible for unrestricted free agency around the age of 30 which could put him in line for one more major deal.

This being said, I could see him getting all the way to arbitration (where I think he’d get around $6.5 million), I could see him signing another short term deal, or I could see him locking in long-term. Karlsson’s contract is clearly priority number one for McPhee and Co., but due to the RFA timeline, don’t bank on it being the first domino to fall.

How long and how much are the contracts going to be for Nikita Gusev and Jimmy Schuldt?

Both are incredibly difficult to project. We’ll start with Gusev. As the KHL MVP he clearly deserves quite a bit of a raise off the $925,000 entry-level deal he was forced to sign and burn. However, he’s never played an NHL game, he’s not able to negotiate with other teams, and he may not be in the NHL for the sole purpose of money. I’ll guess it ends up being a three-year deal which gets him to age 29 before he hits unrestricted free agency with a value short of $10 million total. If he goes out and dominates the NHL, his next deal will easily make up for this one, but if he doesn’t, he’ll have played it perfectly to cash in on potential while not killing the Golden Knights salary cap.

(Oh, and don’t be shocked if he’s an offer-sheet candidate. It may only cost a 2nd or 3rd round pick for someone to throw an offer-sheet on him, and there are probably still some GMs who wouldn’t mind painting McPhee into a corner after the VGK Expansion Draft and the exemption in the upcoming Seattle Expansion Draft.)

Schuldt is slightly easier to project but still fairly challenging. He played in one NHL game and then was ineligible for either the NHL or AHL playoffs. He clearly wants to be in Vegas as he made the decision to come here over basically every other team in the league, but that doesn’t mean he won’t want his payday. Vegas would prefer to keep this contract shorter than four years so upon expiry he remains an RFA rather than a UFA. Let’s guess, three years, $4.75M total ($1.583M AAV)

Expect qualifying offers on all but possibly Lindberg. Nosek and Subban will both file for arbitration but I’d be surprised if either makes it to their hearing. Can’t see either getting away from the Golden Knights nor can I see either cashing in for much more than $1 million. Worst case scenario is Nosek becomes a roster cut prior to opening night and has to clear waivers, but Vegas would rather take that risk than let him walk for no reason. Subban will be the back-up goalie for the Golden Knights next season, I can almost guarantee that.

It is remotely possible that one or more of the players on this list are part of a trade package as RFA’s are always valuable because they remain under team control. Nosek and Bischoff both have a bit of value in a trade, but they wouldn’t be the principal piece.

Aren’t the Golden Knights going to be over the cap? How do they fix that problem?