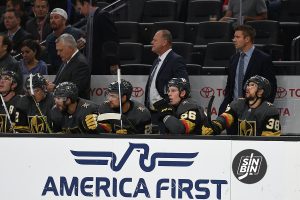 Happy Nevada Day! No better way to celebrate this joyous occasion like playing a hockey game at 3 PM and throwing off any rhythm the 7-1 Golden Knights have gotten themselves into over the past six games of this homestand. Am I right!?!

There’s no question it’s a concern for the Golden Knights who are getting set to wrap up the final game of what’s been an historic and in many ways unbelievable start to the season. However, head coach Gerard Gallant doesn’t see it as a potential disadvantage for his players, in fact, he sees just the opposite.

They’ve played them before, everybody’s played some games at 2 o’clock, 1 o’clock. I think guys like them because they don’t have to come for a morning skate. They stay home, they get prepared and they come to the rink. As a former player, I enjoyed playing those afternoon games, and I think most of the guys do. -Gerard Gallant

It’s an interesting point, and in fact, I found myself with a bit more time to have a life this morning due to the lack of morning skate. So I certainly understand the point, however, change is always a concern, especially for a team as hot as the Golden Knights.

3 PM start, white jerseys/gloves, and likely a minor change to the pregame ceremonies could certainly lend to a bit of a different atmosphere in the rink this afternoon. Thus far, nothing has seemed to get in the way of the Golden Knights, so it’s safe to assume this won’t either, but hey what’s the point of SinBin.vegas if we don’t freak you out about something before it ever happens.