Not So Fast On Knights, Black, Grey, And Gold; Change Certainly Possible

Remember when it was a foregone conclusion the name of the team would be Black Knights or Knights and the colors were the “non-negotiable” black, grey, and gold? Yeah, we do too, it was yesterday. Well, things have changed a bit.

This is not to say that The Creator has stopped pushing for his dream vision for the name, logo, and colors to come true, but comments like this one from Gord Miller are premature, and at this point, inaccurate.

We’ve had conversations with many in the organization about the team name and the consistent answer has been that the process is a lot more complicated than they ever imagined and The Creator getting his way may not end up happening exactly as he planned.

So here’s the process as we know it. The moment the team was announced Adidas (which owns Reebok) was in contact with the Las Vegas organization. The Creator essentially said, “I want my team to be named the Black Knights, and I want them to wear black, grey, and gold.” The folks at Adidas turned around and began their practice of researching anything and everything about the name, the colors, and the city.

END_OF_DOCUMENT_TOKEN_TO_BE_REPLACED

The Name Is Definitely Black Knights, Or Is It?

It’s a well known fact The Creator prefers Black Knights to be the team name when the league finally awards him a team. However, way back on April 21st, 2015 in a Twitter Q&A @LVWantsHockey said there would  be a “Name The Team” contest.

Well, the man himself was on Sportsbook Radio with Brian Blessing and was asked about the importance of quickly unveiling a team name.

We’ve got to get going. We need to start selling those jerseys right away. We are thinking about how we are going to do this. -The Creator

Not exactly committal to saying, “we will be the Black Knights,” like some other sites out there have been referencing. However, he did go on multiple diatribes about the name Black Knights including saying he and a marketing company have already created a logo.

If it were going to be Black Knights, I’ve already got a logo. It’s a beautiful logo. It makes you feel strength, power, dignity, it’s a great logo.

We know what he wants it to be, but he consistently said, we’re going to have to figure out how to do it. I still think the naming contest happens, but it’ll happen quick and it will be somewhat rigged for the name to come out to Knights, Black Knights, or Silver Knights.

The colors on the other hand.

So, we’re going to have to tweak those Rat Pack jerseys a bit (I’m not giving up).

I’ve gotten positive feedback except that people have said, you are going to look like the Penguins. Well, no we’re not. We’re not going to have their uniforms. There will be different variations and so on.

There was a major concern The Creator referenced that I believe is much less an issue than he and his team do.

We screwed up one thing. Before we really announced what we were doing we didn’t go out and grab a bunch of domain names. We’ve done our search on domain names and they are a little bit thin. I have every variation of Black Knights, Knights, and Silver Knights. All the other domain names basically that might be a name, Rattlers, Scorpions, Aces, Rat Pack, someone has run out and grabbed those domain names, so we would have to go to them and buy the domain name. So we are thinking about how we are going to do this.

Here’s why I don’t understand the concern. The official team website will be TeamName.nhl.com. So no matter who owns domain names such as VegasVenom.com, LasVegasAces.com, or VegasScorprions.com, it won’t matter. Would the team like to own them all and point forward them to the official site? Sure. But to think these random domain names will ever be confused with the team’s website is silly.

Might be a little bit conspiracy theorist of me, but it seems like a good way for them to say, “we couldn’t get the domain name, so we just went with Black Knights.”

All in all, there’s no denying “some variation of Black Knights” is the odds on favorite, but it’s certainly far from settled. I had the chance to ask him myself what he thought of Rat Pack, and he said, “I don’t hate it.”

**Brian Blessing’s entire interview with The Creator can be found here. We’ll have plenty more from it as he and Brian touched on GM’s, salary cap, TV networks, and much more.**

Hockey players and missing teeth. Johnny Hockey is ridiculous. Goaltending will once again determine who hoists the Cup. SinBin.vegas’ latest jersey designs are badass. Jason’s back in the penalty box to give you another update. It’s Double Minor with Jason Pothier. 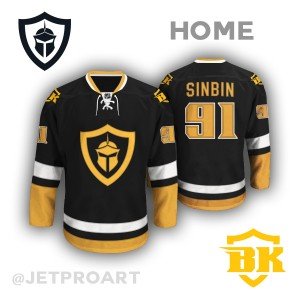 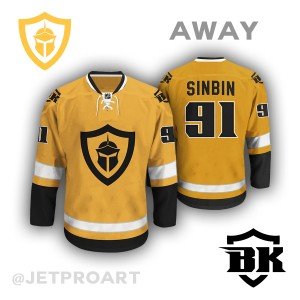