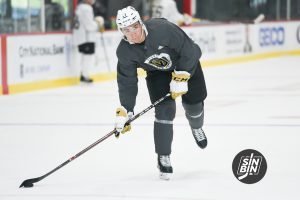 The question for these four is if any of them are ready to take the next step to play in the NHL next season. George McPhee called it a long shot that any of the four make the roster, but if they are going to, the path starts now. They’d have to clearly rise above everyone else to even have a chance. Last year, Brannstrom was the most impressive, but the junior seasons of Glass, Suzuki, and Hague give hope they’ll come in and shine this week.

Whitecloud has a chance to be this year’s Alex Tuch. Last year the 21-year-old Tuch looked like a man amongst boys at Development Camp and it began his path to earning a spot on the Golden Knights roster full time. As it currently stands, there does look to be a spot open for Whitecloud to slide into, but he has to be great starting this week to get it. Whitecloud won’t be the oldest player in camp, but it needs to look like he is. He should be without question the most pro-ready player at Development Camp. By the time the week is out, making sure that is clear would go a long way to McPhee penciling him into the plans to start out next season.

Many of the players at Development Camp for the Golden Knights are not under Vegas’ control, Schuldt is the most intriguing of them all. Like Whitecloud was a year ago, Schuldt is one of the most coveted undrafted NCAA free agents and will be free to sign with any team when his next season at St. Cloud University is over. A Hobey Baker finalist, he’s an offensive-minded defenseman who was the captain of his team as a junior.

Last year at this time he was in the Montreal Canadiens Development Camp and the Habs have reportedly been keeping their eyes on Schuldt ever since.  McPhee proved a year ago that he’s willing to sign a player like Schuldt and hand him an immediate roster spot right out of college. Being invited to Vegas’ camp is a good sign the Golden Knights like the player and may consider signing him when he’s eligible. However, coming to camp doesn’t always mean you have a leg up on signing the player. Zach Whitecloud was in Kings camp last year, and we all know how that worked out.