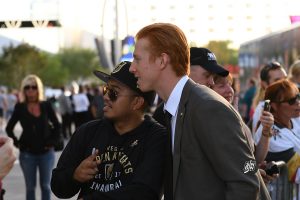 Due to the events of 1 October the Golden Knights decided to cancel Fan Fest and instead have the players make appearances at the LVMPD headquarters, at the convention center to visit with families of victims, and at a local blood bank.

At the time Fan Fest appeared to be cancelled rather than postponed, but now, Fan Fest is back on. It’ll take place at The D Casino in Downtown Las Vegas on Sunday, January 14th from 3-5PM.

Calling @NHL fanatics – mark your calendars! Next Sunday, the @GoldenKnights are coming downtown! The team that’s taking our city by storm is going to be HERE at #theD! Meet the players at our 3rd St stage on 1/14, from 3-5PM! This event is bound to “shutout” the others! #Vegas pic.twitter.com/grGnHkcLdN

The event on October 3rd was scheduled to include the entire Golden Knights roster, The Creator, CEO of The D Derek Stevens, Kerry Bubolz, Gerard Gallant, and TV announcers Dave Goucher and Shane Hnidy.

The Golden Knights have yet to confirm the official list of attendees for the rescheduled event.