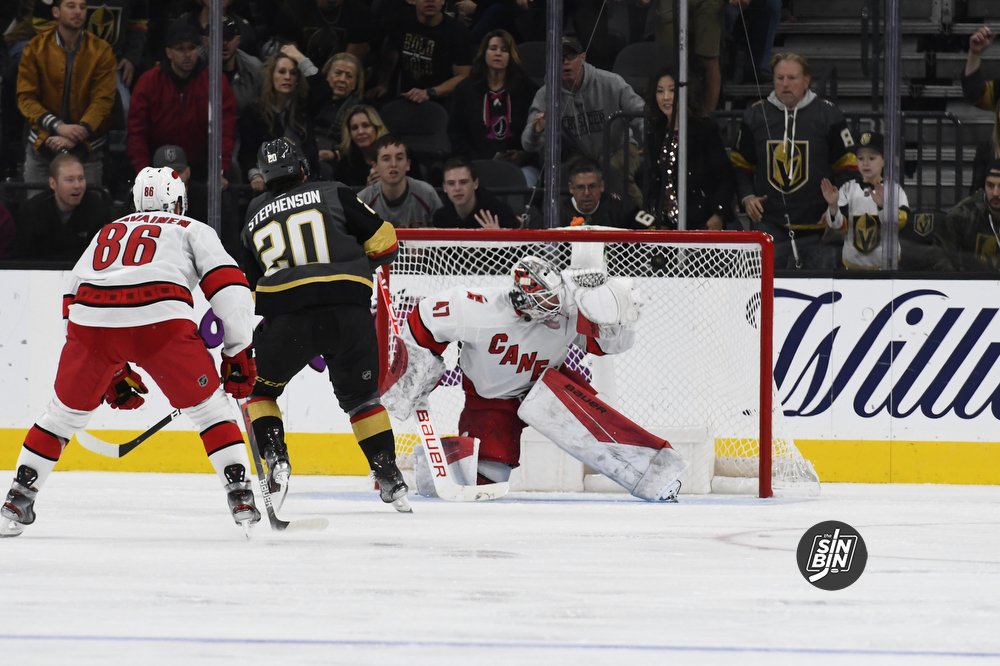 END_OF_DOCUMENT_TOKEN_TO_BE_REPLACED

Recap: Both teams traded chances in the first period but neither could break through. The game was scoreless after a tight opening 20 minutes.

Vegas’ offense broke open in the middle frame. The Golden Knights defense picked up three goals, two from Zach Whitecloud and one from Nic Hague. Rookie Paul Cotter later stretched the lead with his second of the season.

Reilly Smith scored his sixth goal of the season putting the game out of reach five minutes into the final period. Detroit added a late second goal but couldn’t get any closer.

The Golden Knights record improves to 10-7-0 with their 5-2 victory against the Red Wings. Vegas’ six game homestand concludes after their match up with Columbus on Saturday night. Puck drop is scheduled for 7 PM. (Recap by Jason)

Analysis: After a fairly even first period, with a couple miserable Vegas power plays sprinkled in, the Golden Knights exploded in the 2nd. They scored just about every way you can including a pair from Whitecloud. Vegas added a fifth goal and then it turned into a game of pond hockey. Excellent game for the Golden Knights in all three zones. (Recap by Ken)

END_OF_DOCUMENT_TOKEN_TO_BE_REPLACED

Recap:  The Golden Knights traveled to Motor City for a matchup with the Red Wings. Vegas’ Nic Roy opened the scoring a few minutes into the game with his second goal of the season. However, Vegas would take a couple of costly penalties allowing Detroit to tie and take the lead. The Red Wings would add a third taking a 3-1 lead into the first intermission.

The middle frame was quiet with only one goal in the period. The Red Wings stretched their lead to 4-1 after 40 minutes.

Jonathan Marchessault gave Vegas a chance with 15 minutes remaining, scoring his sixth goal of the season. Pete DeBoer pulled his goalie down the stretch but Vegas couldn’t take advantage and Detroit scored an empty net goal to hand Vegas a 5-2 loss to close out the road trip.

The Golden Knights record drops to 6-6-0 and split their four game road trip. Vegas travels back to Las Vegas for a six game home stand beginning on Tuesday. The Golden Knights welcome in the expansion Seattle Kraken for the second time this season. Puck drop in Montreal is scheduled for 7 PM. (Recap by Jason)

Analysis: Special teams was the story of the night. Detroit’s power play ripped the VGK PK apart on their first two chances while the Golden Knights’ power play returned to its usual pathetic look. At even-strength Vegas actually outplayed the Wings, but they fell behind early and just couldn’t find a way back in. (Recap by Ken)

END_OF_DOCUMENT_TOKEN_TO_BE_REPLACED

The Golden Knights last stop on their road trip was in Motown for an afternoon faceoff against the Red Wings. Jonathan Marchessault put Vegas ahead 1-0 at the 16:27 mark of the 1st period. With under a minute remaining Detroit was able to tie it up 1-1 on the power play.

In the 2nd period Max Pacioretty continued his hot streak scoring a goal in four out of the last five games. Vegas played strong defensively and kept Detroit off the board in the middle frame. Pacioretty’s goal made it 2-1 Vegas after 40 minutes of action.

The Red Wings tied it up 2-2 midway through the 3rd period. Detroit would keep Vegas’ offense stagnant and would burn the visiting team with :30 seconds remaining in regulation. The Golden Knights lost a 3-2 heartbreaker in Detroit.

Vegas’ record drops to 9-7-3 and went 1-2-1 on their four-game road trip. The Golden Knights will get back on track Tuesday night against the Chicago Blackhawks. Game time is scheduled for 7P at the T-Mobile Arena. (Recap by Jason)

I'm not apologizing for the loss. These last two nights have been pathetic and they should be embarrassed. The Golden Knights have a lot to figure out. But, they have plenty of time to do it. The time for changes and experimentation is now. Let's hope this is the catalyst for it.

This loss in no way determines whether or not the Golden Knights are going to win the Stanley Cup.

Nor does it even illustrate whether or not they are good enough to do it.

Calm the F down.

That is an absolute boneheaded decision with less than a minute left in a tie game. Cannot have it.

It took Vegas seven minutes before they took a shot on net last night against Detroit. By that point the Red Wings had six shots on net and one past goaltender Malcolm Subban.

Three minutes into the game Detroit took the early 1-0 lead. The Golden Knights warmed up towards the back end of the period totaling nine shots against Detroit’s goaltender Jimmy Howard. The game remained a one goal game after the opening twenty minutes.

The 2nd period was not much better than the first. The Golden Knights dull play continued for much of the period as their offense was again struggling to create chances. Vegas would finally get on the board at the 14:43 mark in the 2nd period on Cody Eakin’s 20th goal of the season. Eakin buried home a juicy rebound left in the crease by Detroit’s Howard. The game was tied 1-1 after forty minutes.

Subban was strong between the pipes in the 3rd period, stuffing every opportunity from Detroit. With 10 minutes left to play the Golden Knights were forced to go on the penalty kill in a 1-1 game. Star killer Reilly Smith disrupted an errant pass leading to a breakaway. Smith gave Vegas the 2-1 lead on his 4th shorthanded goal of the season. Detroit added a PP goal a minute later to even the score once again. The game would need an overtime period to decide a winner. The Red Wings would only need :19 seconds to win as Anthony Mantha scored the game winner on Subban.

The Golden Knights improve their record to (43-27-6) and remain in the Pacific Division’s third place position, with seven games left to play. The team will get back on the ice Monday in St Louis. Opening faceoff is scheduled for 5PM. (Recap by Jason)

If you took Reilly Smith at :19 you deserve to win. That was brutal.

Terrific power play by both units leads to an easy tap in on the backdoor for Eakin.

A disjointed 1st period for the Golden Knights led to the Red Wings having a majority of the possession. A fluky goal by Detroit put them ahead, but the Golden Knights got going quickly in the 2nd. Alex Tuch drew a penalty quickly which led toa Jonathan Marchessault power play goal. Then, the floodgates opened a bit as Vegas tacked on two more, another from Marchessault and one from William Karlsson. Marc-Andre Fleury sprung into action as the period wound down making multiple terrific saves. Detroit scored one to cut the lead to one, but a nice Brayden McNabb rush led to a tip and a goal.

After all the negativity, VGK ends up with 4 points on the road trip and are back to 12 points clear of the playoff cut line.

Karlsson was on the ice for 1:35 on the shift he scored on. Yet, the burst of speed at the end of it led to the goal. Unreal. https://t.co/8Y2guCy3cq

The Golden Knights iced the puck directly off the opening face-off, but that was the end of the bad news for them on the night. Alex Tuch scored his first goal in his last seven games. The Cody Eakin struck twice, once shorthanded, and then Tuch added his second of the night in the 2nd as well. Vegas coasted to the finish line in the 3rd.

The Golden Knights have more goals than the Little Caesars Arena has fans! 4-0 VGK. 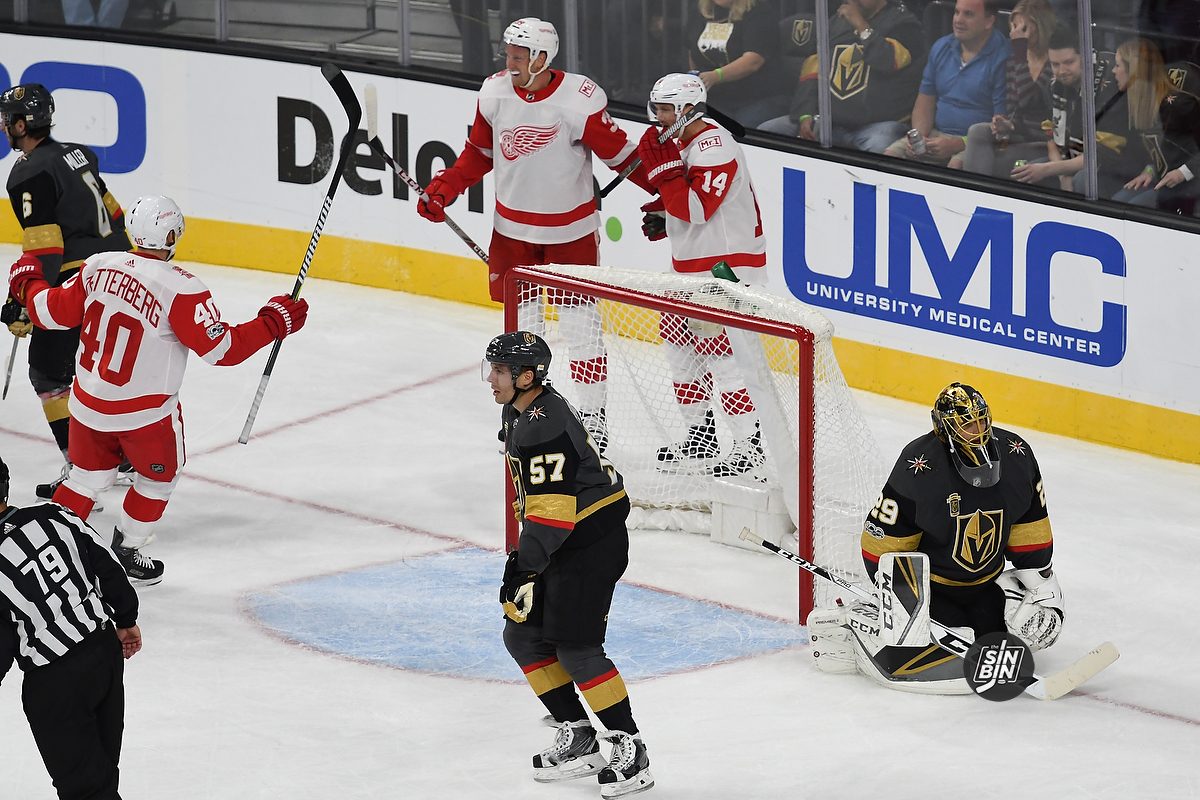