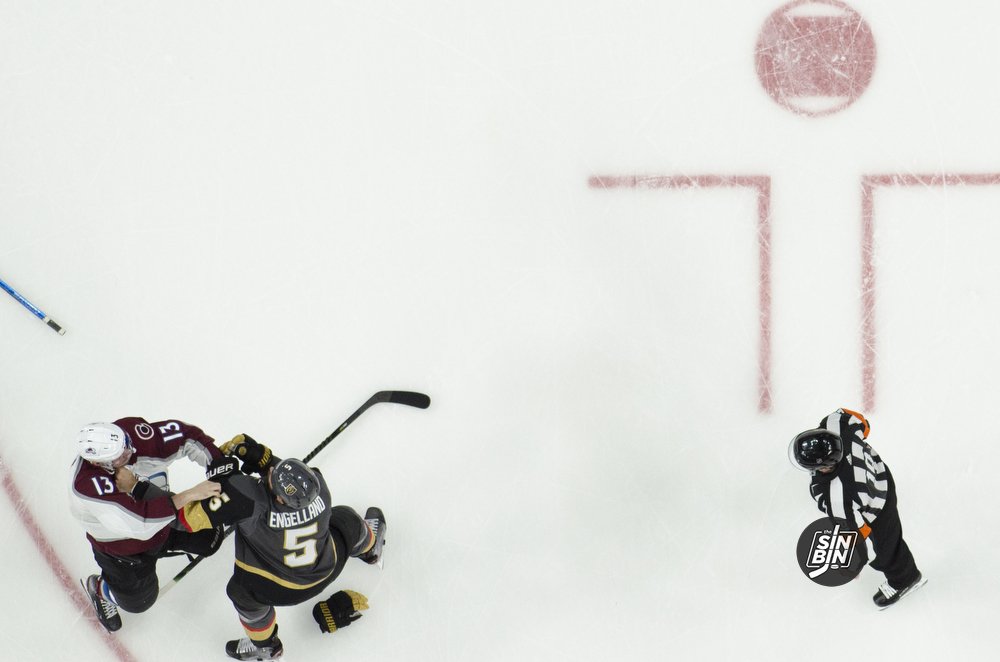 No real reason for this picture other than that it’s awesome. (Photo Credit: SinBin.vegas Photographer Brandon Andreasen)

It’s one of those sayings that sounds like a cliche rather than something that can actually be implemented in real life though.

Much like the saying “we roll four lines,” which is unequivocally not true about the Golden Knights. Vegas’ top-six forwards play about three minutes more even-strength time than their 3rd line and five minutes more than the 4th line. Quite simply, over the course of the whole game, the Golden Knights don’t “roll four lines” and they never have. (The numbers are essentially identical in all three years.)

However, the “play the same way” mantra is surprisingly accurate and the Golden Knights are on pace to do it at a historical rate.

The way this is calculated is through Corsi or SAT%. Corsi is a horribly imperfect stat but until we have accurate puck tracking data, it’s the best we’ve got. The idea is to gather up all the shot attempts to try and figure out which teams spend the most time in the offensive zone. In theory, a team with a 50% Corsi spends the same amount of time defending as they do attacking. 55% Corsi means you spend more time in the o-zone than the d-zone, and 45% Corsi means more time in the d-zone than the o-zone.

Again, it’s not perfect, but the numbers for the Golden Knights are astounding.

Vegas’ overall Corsi this season when the game is at 5-on-5 is 53.3%. That’s good for 4th best in the NHL, behind Carolina, Los Angeles, and Montreal.

This is to be expected. When they are down as they protect the lead, they shoot less, when they are up they shoot more as they try to tie it up. However, the disparity is essentially nothing, which is incredibly rare for an NHL team. Over the course of a game, we’re talking about a difference of about one shot per situation. If Vegas gets 53 shots for and allows 47 when the game is tied, they’d get 52 and allow 48 when they are up, and get 54 and allow 46 when they are down. A one shot attempt swing is basically inconsequential and when compared to the rest of the league, unbelievable.

END_OF_DOCUMENT_TOKEN_TO_BE_REPLACED

Corsi? Fenwick? What Does It All Mean?

I swear every year pro sports leagues try and out duel each other when it comes to analytics. For the most part traditional stats work, but I understand the need to analyze more than just points scored or given up. Which leads me to the new Corsi stat. Created by an Edmonton blogger when he heard a league GM say on radio, there should be a stat to accurately track shot differential. The NHL adopted the statistic and it’s currently being tracked this season.

So what the hell is Corsi? Well, thanks to the good people at Stats.HockeyAnalysis.com this is it.

It’s fairly simple when you read the formula, it’s just the addition of all shots attempted, rather than the standard ‘Shots’ stat which disregards a large number of attempts. With a Corsi rating, teams can look at pucks shot at their net, versus shot at their opponent’s net. It’s a good barometer of how aggressive and efficient team offenses can be. Corsi can also help teams game plan defensively knowing your opponent’s average shot differential.

Fenwick is just Corsi without blocked shots. I would think Corsi and Fenwick would be a good tool for organizations. If the coach is concerned with poor Fenwick rating, he may have the team shoot less and more efficiently. Or, start passing more.

Imagine if Corsi ratings were charted during the Gretzky-Oiler days or the Lemieux-Penguin days. The shot differential must’ve been ridiculous as is. Add in blocked and missed shots and their Corsi ratings would’ve been sky high. Although maybe skewed because they didn’t miss the net much.

All I know is that these stats are certainly the future, and if we are going to have success here in Vegas, we’ll have to have someone who can dive balls deep into analytics. We know a guy…but he doesn’t seem to want to give us a straight answer.