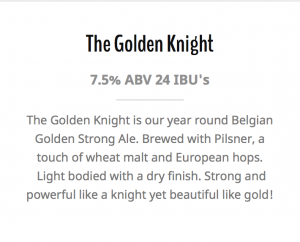 It’s currently available at the Hop Nuts Brewing Taproom on Main Street and Charleston. You can also grab a glass of The Golden Knight at The PKWY Taverns and 702 Public School.

It’s a Belgian Style Golden strong. It’s light colored (Golden), light bodied, well carbonated strong beer! When they unveiled the team name they said they wanted something that represented strength and power and we felt The Golden Knight represented that. Even though the color is a golden and light in color, don’t get it confused. It packs a punch at 7.5% ABV but the design of the beer makes it very drinkable and gets along well with others. It’s a good intro beer to non craft beer drinkers and craft beer junkies at well. -Hop Nuts Brewing

Plus, there are cans of The Golden Knight coming to a local Smiths, Vons, Albertsons, Lee’s Liquor, Total Wine, and Speedee Mart in the next two months or so.

Go give it a try and let us know how it is. With a name like that, it pretty much has to be amazing.