It’s a story that’s been told a thousand times over; how the atmosphere at T-Mobile Arena for Golden Knights games surprises even veteran players in the NHL. Recently though the story has almost become worn out as the same comments, same examples, and same quotes from players, coaches, and fans are muttered after each and every game.

Alex Ovechkin to the rescue.

It’s not a regular rink. It’s kind of like an unbelievable show, you get excited. It’s like you’re in a nightclub. It’s like a party. Everybody dancing over there. It’s like, ‘Holy Jesus, are we in a hockey game or is this like a pool party out there?’ They’re very, very tough to play against. They jump in right away. They have tremendous skill and tremendous speed. When you’re not ready, you’re going to be in a tough position. -Alexander Ovechkin, Washington Capitals

The timing of the “Holy Jesus” quote was fortunate for me as it came just days before I was set to travel to Washington DC to experience the difference Ovechkin was talking about myself. 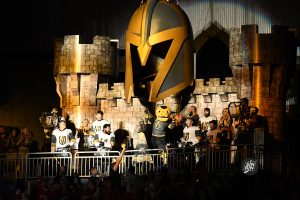 Haven’t seen anything quite like the castle anywhere else either. (Photo Credit: SinBin.vegas Photographer Brandon Andreasen)

Let’s start with the very first difference, specifically for fans. Getting to the T-Mobile  Arena and walking through The Park is unmatched. DC’s set up actually is pretty nice as a train station arrives right on the corner of the arena, there’s a lobby where people were held before the gates open to escape the rain, and there’s a full sports bar attached to the arena itself. It’s nice, but it’s not Vegas.

Then you go into the arena. The first time at a hockey game where the in-arena experience really begins is with the player warm-ups. In Vegas, they count it down, demand the fans get up and cheer, then play John Wick Mode followed by a club-style music mix that’s so loud it’s challenging to talk to the person in the seat directly beside you. Contrast that to Capital One Arena, where the lights are darkened, a minor light show occurs, the players take the ice and the music is softer than I listen to in my car. The same was the case in Anaheim and Dallas. Los Angeles may have actually outdone Vegas with this light show.

I never understood it before traveling around a bit this year, but the importance of the sound system in an arena is paramount to creating an atmosphere. Being a brand new building, T-Mobile Arena has a major jump on rival buildings.

Then we get to the pregame. Yeah, the Excalibur/sword/stone/medieval times thing (see below) is a little hokey, but it does lend to the beginning of the battle in the stands. In Washington, Los Angeles, Dallas, and Anaheim (the four other arenas I’ve seen the Golden Knights play in this year) there is little to no mention of the opposing team. In Vegas, they skate a flag displaying the other team’s logo onto the ice and wave it around to give the away fans something to cheer about. Then the Golden Knight comes out and you know about the charade that goes on from there.

One of the unique aspects of T-Mobile Arena is the constant, endless battle between the away fans and the home fans. Away fans chant, home fans have just seconds to drown them out before it becomes embarrassing. Obviously, there aren’t going to be thousands of Vegas fans in other buildings, but that power struggle creates organic noise rather than the forced chants from a mascot or scoreboard. Sure, Vegas does those as well, and when they do they are better than every other arena I’ve been in to this point, but even without them, the atmosphere is constant.

On to the game. The goal horn, goal song, and everything that goes with the biggest moment in a hockey game, other buildings almost feels muted when compared to T-Mobile Arena. It goes from a hockey game to an all-out celebration when the Golden Knights score, when the Caps, Ducks, or Stars scored it felt like the end of a high school graduation right before they throw the hats. (LA is much closer to Vegas).

The atmosphere at T-Mobile Arena is non-stop. There’s never a dull moment, whether it’s a commercial break, an intermission, a goal review, or an icing, there’s always something else going on. There’s never a moment to catch your breath and realize the surroundings, instead you live it for the entire three-plus hour stay.

In short, Ovechkin is right, Vegas really does offer a “Holy Jesus” moment compared to every other building I’ve been to this year. This isn’t to say there’s anything wrong with any other arena or the atmosphere that comes with it, but simply put, Vegas is different, and there’s no secret why everyone who visits can’t stop raving about it.

Moving forward it’s going to continue to be up to Golden Knights fans to maintain the atmosphere we’ve come to expect at T-Mobile Arena, but it shouldn’t be something taken for granted because it just isn’t like that anywhere else.

Not quite John Wick Mode. pic.twitter.com/MKbZltezTr