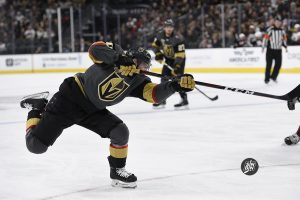 See you on the 11th and 13th! (Photo Credit: SinBin.vegas Photographer Brandon Andreasen)

Now that they’ve got the little “x” next to their name and have clinched not only a playoff berth but also home-ice advantage in the first round we can start talking about home playoff games at T-Mobile Arena.

The NHL calendar declares this year’s Stanley Cup Playoffs will begin on April 11th, but there’s never a guarantee when each team that’s qualified will play their first game.

However, if you check out the calendar for T-Mobile Arena, the home of the Golden Knights, you’ll notice, the NHL is painted into a corner. Sucks for them, great for us. 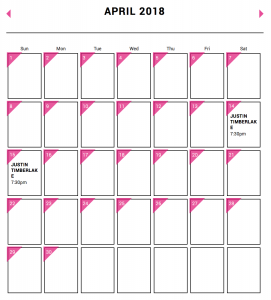 Justin Timberlake is set to perform on back-to-back nights at T-Mobile, meaning the building will be unavailable for hockey on April 14th and 15th. Once again, the NHL playoffs begin on April 11th.

Since 2010, only one out of 56 first round playoff series have featured back-to-back games in games one and two of a series. None of the 56 first round series saw three days in between games.

The only back-to-back that’s occurred over the past seven years was in 2016 in a series that began in Miami and then headed to Barclays Center in Brooklyn. Oddly enough, All Star head coach Gerard Gallant’s team wound up being the one that paid the price, losing the front end of the back-t0-back and eventually losing the series 4-2. (It’s also the series in which George McPhee “discovered” Reilly Smith.) But it wasn’t due to a conflict in just one building, it needed both to cause the back-to-back.

The series starts with a rare playoff back-to-back on Thursday and Friday, with the NHL saying it was necessary because of a “combination of factors” with other events scheduled at both arenas. The Panthers’ BB&T Center couldn’t host a potential Game 1 on Wednesday because of a concert; the Islanders’ Barclays Center has conflicts on Saturday, Monday and Tuesday. -CBS New York on 4/14/16

The most likely opponents for the Golden Knights in the first round are Colorado, Los Angeles, Anaheim, St. Louis, or Minnesota.

The Pepsi Center (Avalanche) has an event scheduled for April 14th, Xcel Energy Center (Wild) has one on April 21st, and Scottrade Center (Blues) is booked on April 23rd. Staples Center and Honda Center are both wide open after the 13th. None of those pose a problem for a potential first round matchup.