There are a lot of challenging decisions to be made by an expansion team general manager. Whether it’s signing players, making cuts, or the Expansion Draft itself, George McPhee has done a lot of work to turn his blank slate into what we now know as the Vegas Golden Knights. 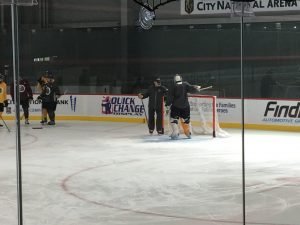 Hi Malcolm, meet Marc and Calvin, unless one of them disappears, you’re never gonna play.

But for every tough decision he’s had to make due to the logistics of running the first expansion team in the salary cap era, come opportunities to make somewhat outside of the box moves only a team not planning on truly competing until year three can make.

A perfect example is the waiver claiming of goalie Malcolm Subban. In the midst of figuring out which defensemen will make the team, juggling waiver exempt contracts, and toying with the injured list, McPhee went in the opposite direction and added a player to the fold rather than removing one.

He’s not going down (to the AHL). The odds are not long, they are not short (that we keep three goalies this season). I’m not sure what we are going to do just yet. When you see an opportunity like that you hope your club is nimble enough to take advantage of it, and we made a move and we’ll see how it develops. If it works out, then good for us. If it doesn’t work out, then it was a nice try. -George McPhee

So here we are, with three goalies, nine defensemen (one is injured), 11 forwards (not counting Neal), and Vadim Shipachyov, Shea Theodore, and Alex Tuch all technically optioned to the AHL.We’re going to figure it out and sort it out. He came on the waiver wire. He’s a big prospect and a guy who can be a good goalie. Right now we’ve got three so we’ll sort it out. When a guy gets put on waivers and we think he’s a high-end prospect and a young player we’re going to take that chance and opportunity. -Gallant

McPhee told us the plan remains that the team will keep eight defensemen, so unless a goalie is traded, that means 12 forwards. It also means, they must think a lot of Subban because the already messy roster just turned into the equivalent of a 13-year old girl’s bedroom who is going through the “do the opposite of what Mom says” phase.

We see something in the player that’s why we claimed him. If we can get him to adjust to the way we think he should play and if he’s coachable, we think we could have a good one… which is why we made the move. Not quite sure he’s ready for this level, but this is what we’ve done and we’ll work with him and see what we can turn him into. -McPhee

Subban weighed in on exactly what McPhee might be referencing.

Calming down my game has always been a thing I’ve been trying to work on. There are some things you can get away with in minor hockey and juniors at the pro level you get exposed. Utilizing my size in the net and coming out and challenging and not moving around too much. I think I underestimate my size a bit and I can use it to more to my advantage to move around a bit less, to be more stationary, be a little more quiet, it will help me with rebound control and on the first shot as well and better to recover. -Malcolm Subban

For McPhee, it’s a ballsy move, and I don’t use that term lightly. We’re talking about a GM who just sent his best player to the AHL (temporarily) because “we can,” a GM who took the best two NHL ready young players he had and shipped them off because there aren’t enough roster spots, and a GM who was already staring at a roster with too many players, and decided to bring in yet another one, and a risky one at that.

It proves many things. First, the GM in charge of this team isn’t afraid to have an open mind and make the somewhat head-scratching move. It also shows George McPhee has little to no interest in winning this year, and that’s just fine. He has a roster of 23, plus the AHL, ECHL, juniors, and overseas, and he’s going to use every last asset he can to make this team great… in six years.

As for Gallant, he’s kind of just stuck in the middle of it all. Yesterday he had Shea Theodore and Alex Tuch, today he has a backup goalie who was described by the guy who brought him in as “not quite sure he’s ready for this level.”

We make a plan for the goalies and the plan can change like anything else. Fleury is our number one guy right now and he’s going to play and we’ll see what’s going to happen with game two. Do I think they are all (going to play)? I don’t know. During the season yes, but not right away? -Gallant

I guess an expansion team is a lot like a box of chocolates, you never know what you’re gonna get.

Entire locker room interview with Malcolm Subban after his first time on the ice at City National Arena on October 4th, 2017.