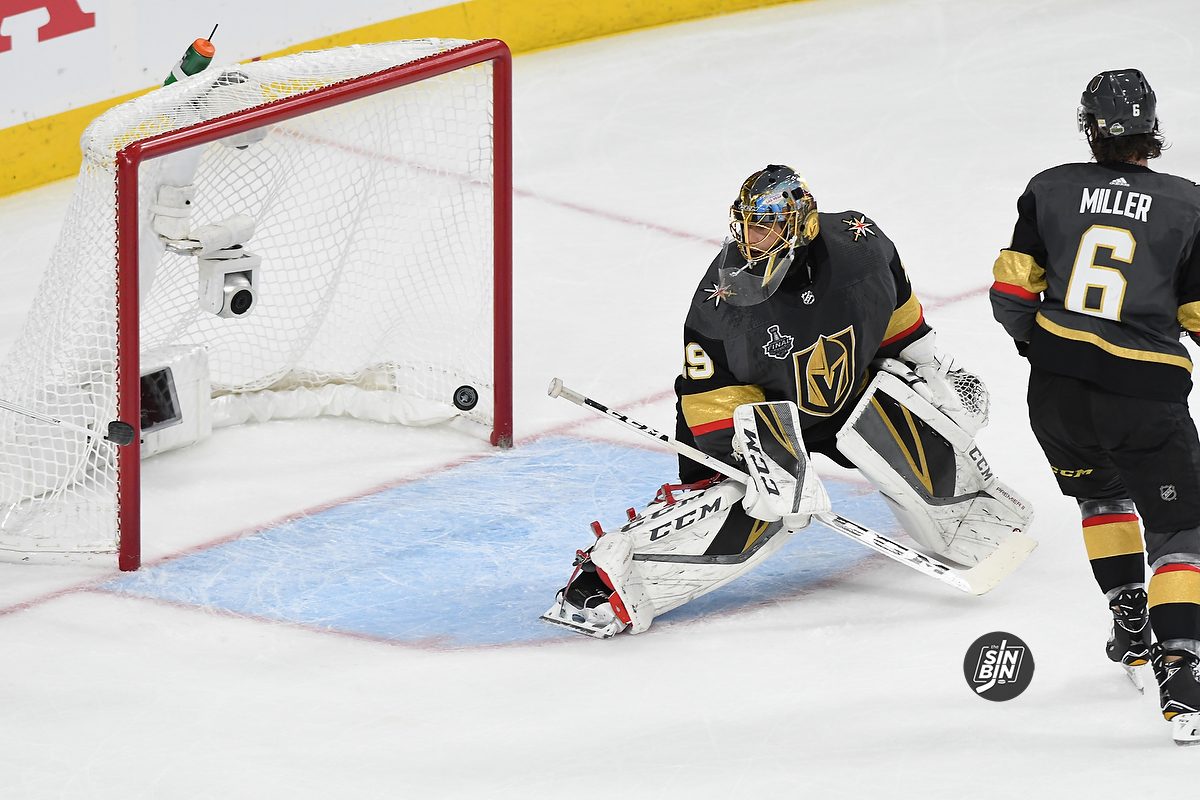 The Golden Knights are down, not out. (Photo Credit: SinBin.vegas Photographer Brandon Andreasen)

Just over a minute into Game 4 a puck caromed off Erik Haula’s skate and hit the post. Two minutes later Reilly Smith had a wide-open look at an empty net and put it wide. Then, on a power play, James Neal was fed a pass which found him staring at a net even more open than the Smith shot, and Brayden Holtby made another unbelievable save. Finally, 20 seconds later Neal hit another post.

Four chances, less than five minutes into Game 4, and the Golden Knights had absolutely nothing to show for it.

Obviously it’s frustrating but even if the pucks didn’t go in we were creating a lot of chances after. Next thing you know it’s 3-0 and we were still pushing but they were scoring goals tonight and we were not. Sometimes it’s just the way it is. -Tomas Tatar

The “way it is” is cruel, it stinks, it’s frustrating, but there is a positive. The Golden Knights did get back to what they’ve done well all season in this game. They created chance after chance after chance but they just didn’t go in the net. If one does, the game might be different, but more importantly, maybe the next one will too.

It would have given us momentum, but we can’t worry about that. We’ve just got to move on, take what we did well in this game, forget about the bad, and worry about Game 5. -Alex Tuch

Game 4 wasn’t like Games 2 or 3. The Golden Knights did not fall into the same traps. In fact, tonight’s a game they feel like they have a good shot to win more often than not.

It was frustrating because of the score. I thought we played our best period of the series. We hit two posts, we had some good chances, and we got nothing out of it… There were a lot of moments where it was our (style of) game for sure. We played a lot of the game the way we wanted to play it. -Gerard Gallant

The narrative will likely be about puck luck, but the fact is the Golden Knights simply didn’t finish the chances they had. Open nets, odd man rushes, power plays, you name it, the chances were there for Vegas, yet not once until it was 4-0 could they put one in.

They got the breaks because they are working hard, and you always say that, when you work hard and compete hard you get those breaks. I thought it was a good stride forward for our team coming tonight so hopefully that’s the first step to getting some breaks in the next game for us. -Gallant

The series is now 3-1, a hole no team has climbed out of since 1942 in a Stanley Cup Final. Things look grim, but Gallant’s message isn’t one of negativity, and the locker room certainly seemed to have the feel like they can come back in this series.

I think tonight’s game was a step forward for our group. Obviously we’ve got no more room for error so we’ve got to get ready for the next game. -Gallant

They’ll need this first, and a second, and a third if they want to be another first since 1942, but hey, not like this team hasn’t surprised us before.