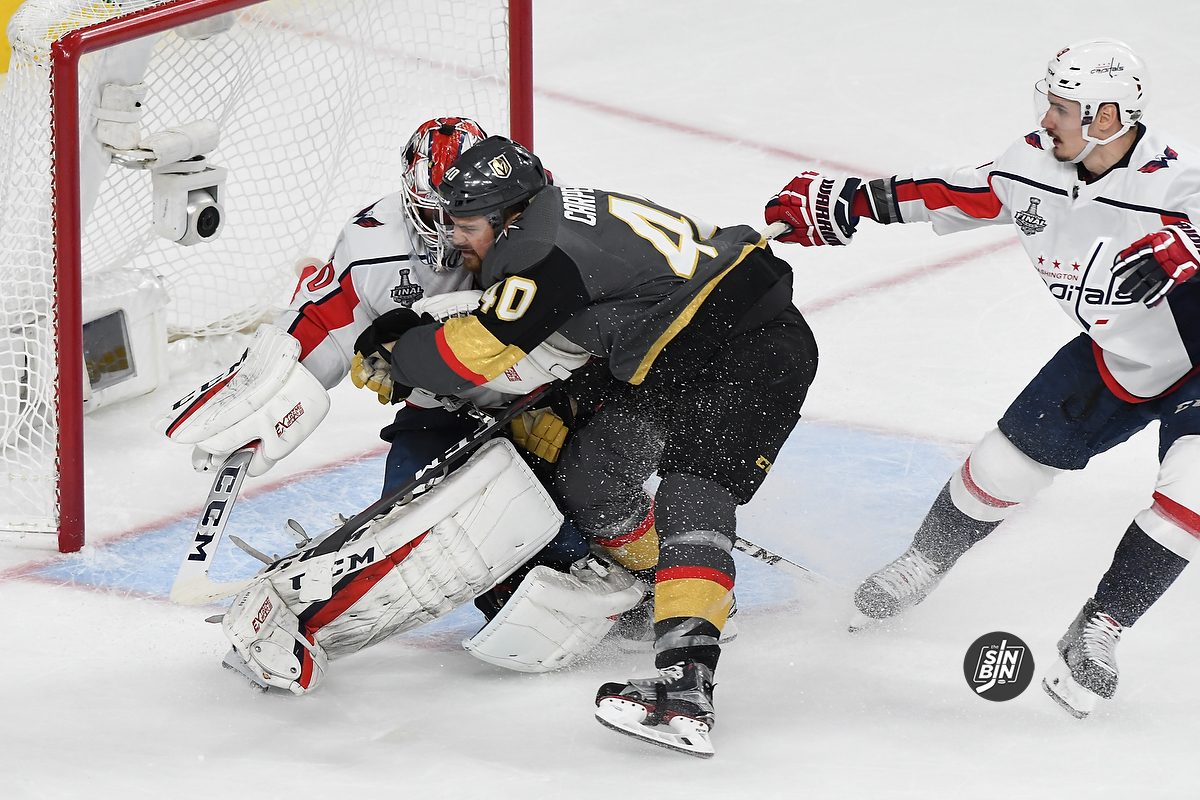 There wasn’t enough in front of the goal either. (Photo Credit: SinBin.vegas Photographer Brandon Andreasen)

For five periods of hockey in the Stanley Cup Final the Golden Knights offense had been relentless. Creating turnovers in the neutral zone, wreaking havoc on the forecheck, and transitioning from defense to offense quickly. Unfortunately in the series’ sixth period, playing from behind the entire 3rd period of Game 2, none of these things were true for Vegas.

We’ve pushed in a lot of series, we’ve pushed, and pushed back hard and we’ve had success but you aren’t going to be able to do it every time. The goalie is going to make great saves, but you just have to be ready for the next game. -Nate Schmidt

The difference tonight was the push wasn’t strong enough to break through the wall the Capitals had set up through the neutral zone and into the Golden Knights attacking zone. Aside from the special teams chances, Vegas was one-and-done far too often, they had way too many failed entries, and the forecheck was not creating turnovers like it has all season long.

They were just sitting back waiting for us. We got some good chances in the 3rd period, but you’ve got to bury them. -Jonathan Marchessault

The chances were not making it to Holtby though. The Golden Knights went more than 10 minutes from 13:58 to 3:38 remaining in the 3rd period without a single shot on goal.

Washington is a stout defensive team when they have the lead because of their strong neutral zone play. They took away a lot of the Golden Knights transition game through the center of the ice forcing Vegas to either make a difficult pass or dump the puck into the zone. The Capitals were much more careful with the puck giving it away just four times in the game compared to their nine in Game 1. Also, the Golden Knights forecheck was not creating as many takeaways. They came up with just one the entire 3rd period by a forward and just three total.

We lost a 3-2 hockey game, Tuch has a wide-open net with two minutes left with a chance to tie it up. We didn’t play our best game, but we had 39 shots and we still created a lot. It’s one of those games where Holtby played real well and he was the difference in the hockey game. -Gerard Gallant

It will be interesting to see if Gallant is singing the same tune tomorrow after watching the film. Braden Holtby played well and made one of the best saves any goalie has made on a Golden Knight shot all season, but Vegas simply didn’t do enough in the 3rd period to overcome the deficit.