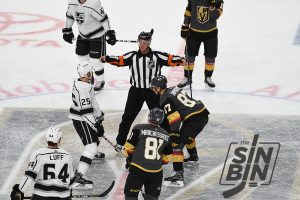 Since training camp began Reilly Smith, Vadim Shipachyov, and Jonathan Marchessault have been playing on a line together. Despite Gerard Gallant giving non-committal answers to my numerous questions, it’s safe to assume this will be the Golden Knights top line heading into the regular season.

Maybe one of the reasons for Gallant’s unwillingness to just say “Ken, shut up, yes it is the first line,” is that the three of them weren’t really showing much by way of results on the ice in the games they played together. That changed to start the second period last night.

Today was a better game for us. We made more plays, got more time on the puck, and were close to each other. It was a good game for us, but there’s still room for improvement. -Jonathan Marchessault

To begin that second period Shipachyov, Smith, and Marchessault were on the ice together for a 2+ minute shift in which they controlled the puck and had multiple scoring chances. Then on their next shift, they finally broke through when Smith sent a pass to Shipachyov right in front of the net, he could have shot, but in classic Shippy fashion he passed it out to Colin Miller who ripped it into the back of the net.

But it wasn’t all fine and dandy. In the first period, they played together for around five minutes and did not get a single shot on net. There really wasn’t even anything close to resembling a scoring chance either, and to this point, that’s been more of the norm than the flashes of brilliant

We watched our last game together and talked about what we wanted as a line and I think it helped us, but there’s still more to come. -Marchessault

Every day so far we’ve gotten a little bit better and gelled off each other a little bit more each day. -Reilly Smith

Obviously still a work in progress, but the flashes were finally there. If they can turn those first 10 minutes of the second period into an entire 60 minute game, we’re in for a treat. But if we get the other 50 minutes consistently, it won’t take long before we’re calling for a James Neal sized replacement on the Golden Knights top line. 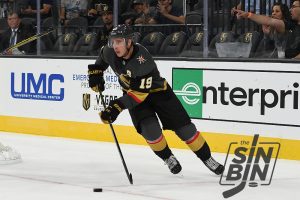 Reilly Smith #19 of the Vegas Golden Knights skates against the Los Angeles Kings at the T-Mobile Arena on September 26, 2017 in Las Vegas, NV. (Photo by Brandon Andreasen)