Throughout the course of the year, especially following key moments for prospects like Development Camp, rookie training camp, and international junior tournaments, we will update the rankings. Follow us on Twitter and Facebook for alerts on when the page has been updated.

Here’s a little tease, click here for the full rankings.

The diminutive Swedish defenseman almost has an aura around him when he steps on the ice. Much like a home-run hitter in baseball, there’s a feeling that every time he touches the puck something special is about to happen. He has great vision and an incredibly high confidence level that leads to breathtaking stretch passes. He’s also a very good skater which helps him overcome his small stature. Moving forward he has to work on controlling mistakes. Due to his unwavering belief that he can make something happen with the puck, he tends to turn it over or get caught out of position quite frequently, much more than a reliable NHL defenseman should. Brannstrom has a legitimate shot of making the Golden Knights roster out of camp, but with his waiver exempt status and a bit of a logjam of NHL-level defenseman, he’ll more than likely end up in the AHL to start the year. 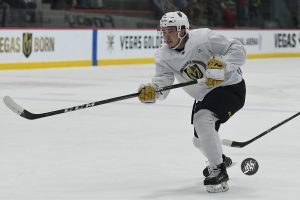 The first draft pick in Vegas Golden Knights history has done nothing but dominate since being selected by George McPhee. He scored 102 points in 64 regular season games in the WHL with the Portland Winterhawks including 37 goals. What makes Glass such a promising prospect is his ability (and willingness) to defend. He’s been relied upon in Portland as a top penalty killer and is consistently given a large minute load when his team is ahead. He’s also widely regarded as a tenacious forechecker, a skill that will fit in well with the current Golden Knights roster. Glass projects in the NHL as a two-way player with good speed, solid vision, and the ability to score. He’s still likely a year out from making the NHL roster and will probably head back to Portland this year.

The most pro-ready prospect in the entire Golden Knights pool is Zach Whitecloud. He spent the final few weeks of the season with the Golden Knights and even played in an NHL game with Vegas in which he was +3 vs. Edmonton. In Development Camp he was physically the most ready player, but he also displayed great poise and leadership on the ice. When his time comes, and it may not necessarily be out of training camp, he’s not going to be a flashy player, but he will be reliable. He projects as a solid stay-at-home defenseman with potential upside offensively as he matures. His place near the top of the list is more based on how close he is to playing in the NHL than it is the likelihood he becomes a superstar player. That being said, it shouldn’t surprise anyone if Whitecloud puts together a long and successful NHL career.

Read the rest of the rankings here.