Here at SinBin.vegas we have a static page on the site called our Golden Knights Prospect Rankings. We try to update it about once every four months but the wackiness of the 2020 calendar year has thrown that for a look. We ended up going 10 months between ranking updates but the new one is finally here.

There’s a new goalie atop the list, a few newcomers to the Top 5 skaters, and all new draft picks are on the list. Here they are… 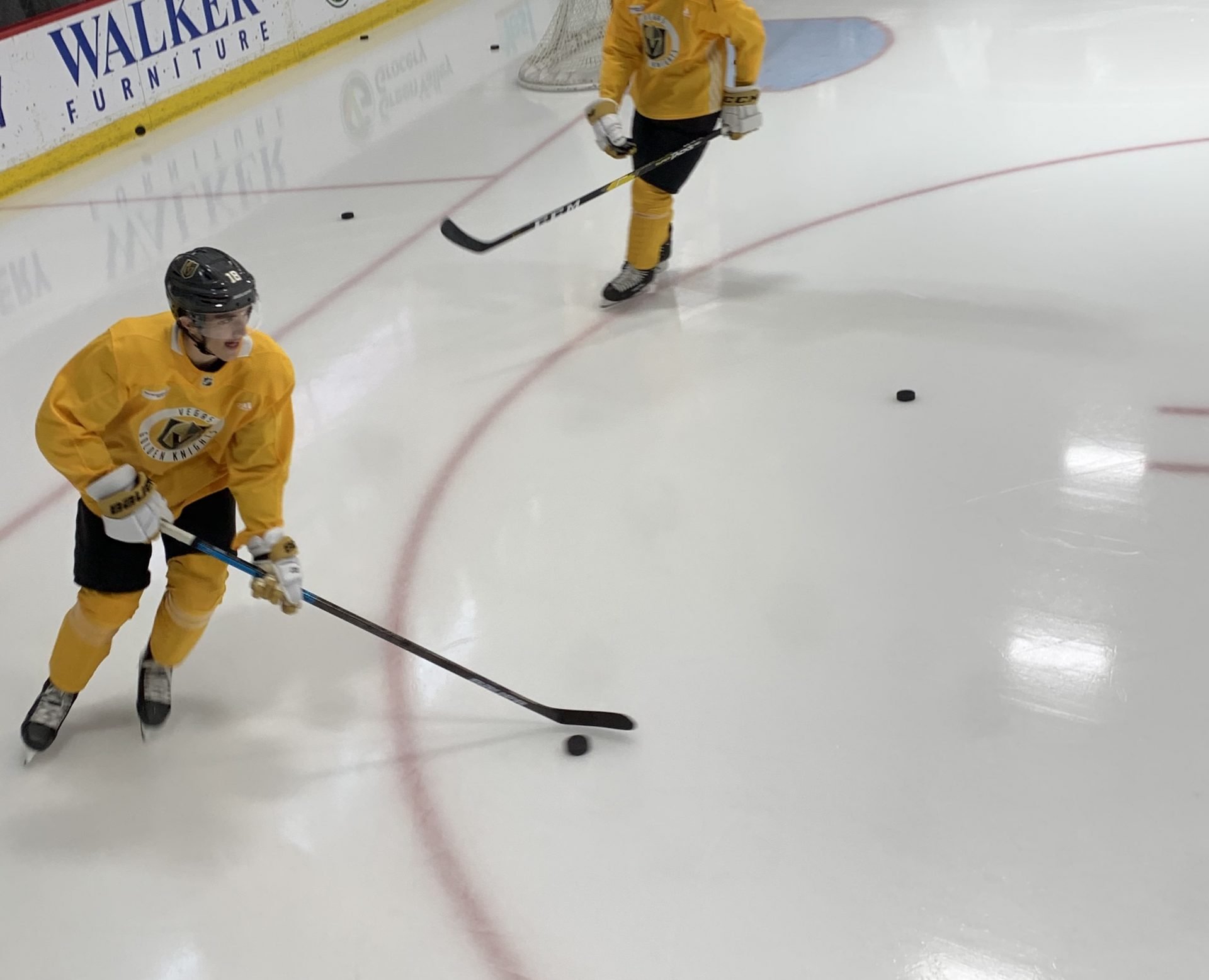 Peyton Krebs is close. He’s not there yet, but he’s close. If there’s one positive that’s come out of COVID is that it’s given the Golden Knights a chance to drag Krebs along the development path. He was in the bubble in Edmonton, he was in camp with the Golden Knights, and now he has a chance to be in AHL camp and maybe even play a few games before he has to go back to the WHL. I know people want him on the roster now, but it’s not time yet. His acceleration is impressive, his vision is very good, and his ability to make the right play in tight spaces and along the walls is solid for a player of his size. I think the future is as a winger, not a center, but I think the future is bight for this kid.

More on Krebs
4/16/20 – Krebs did everything he was supposed to since the moment he was drafted. He got himself healthy, he had a chance to practice with the NHL team for a day, and then he went back to the WHL and dominated putting up 48 assists to lead his team despite playing only 38 of the team’s 63 games. The only disappointment was that he was not selected for Team Canada at the World Juniors, but that was more due to where he was in his rehab as opposed to his skill level and worthiness to be on the team.

11/16/19 – Krebs is finally back from the Achilles injury. He skated in one practice with the Golden Knights before heading back to Winnipeg to play in the WHL. He’ll wear the “C” for the Ice and is expected to be a dominant force in the league again this year. The big test will come at the World Junior Championships in December. He’ll be one of the best players on the Team Canada roster, and coming off their disappointment last year, the pressure will be on.

7/5/19 – The Golden Knights first pick in the 2019 NHL Draft is everything and more that you can ask for out of a center prospect. He’s a 200 foot player, plays in all situations, has a high level of skill, drives the offense on his line, and has great hockey sense and compete level. Unfortunately, Krebs came to camp with an injury and wasn’t able to skate. Had he gone out and dominated camp, he would have had a real shot to have been #1 on this list due to his ceiling. Hopefully he makes it took rookie camp in September, if not, World Juniors will be his next real shot to show he’s ready. By then, Glass will probably have played in 10 games, so don’t be surprised if Krebs is atop this list the next time it is updated.

If Morozov was doing in the AHL what he’s doing in the KHL the excitement level surrounding him as a prospect would be much higher. The KHL is notorious for making life very difficult on young players and at age 20 Morozov is playing at a high level for one of the league’s best team’s. He’s a 200-foot center that has the hands to score and create for others. 11 goals in 47 KHL games is nothing to scoff at and once he decides it’s time to give North America a shot, I think he’ll be a Golden Knight shortly thereafter.

More on Morozov
4/16/20 – Morozov had a pretty wild year playing in three different Russian leagues and in the World Juniors. He impressed at the World Juniors and he was starting to really put it all together in the KHL playoffs. He’s the type of player that is going to get a majority of his goals through hard work and willingness. The problem in his game is that he shuts off from time to time. It ends up leading to breakdowns and penalties. Hopefully it’s something he grows out of because he has enough talent to be an NHLer.

11/16/19 – This is a deceptive one because Morozov actually moves up in the rankings, but he really shouldn’t have. He’s been unable to crack the KHL roster for SKA St. Petersburg and he hasn’t exactly ripped up the Russian minor league, the VHL. World Juniors will be important for Morozov as he may be a top-six center for Russia.

7/5/19 – Yet again, we didn’t actually get to see him play as he skipped Development Camp for the second year. Thus, he ends up soaring down the rankings even though he appears to be a player with a real future. He’s young enough to play for Russia in World Juniors this year, and he should have an expanded role. Hopefully the numbers start showing up in the KHL this year too.

1/8/19 – The first real chance we’ve gotten to see Morozov was a good one. He looked very good at times as the 4th line center for Team Russia. His selection to this team was impressive in the first place as Russia historically does not like to choose 18-year-olds for their U20 team. However, Morozov helped make an impact and looks like a terrific 200-foot player. His backchecking was probably the most exciting part of his game as he constantly would come back into his own zone, break up a play and then get the puck moving forward. Still want to see a lot more of him, but don’t be surprised if he’s in the top 3 or 4 the next time I update this list.

7/28/18 – Unable to attend Development Camp following the Draft, Morozov remains a bit of an unknown. However, he has recently signed a contract with SKA St. Petersburg (yeah, the Shippy one) and was selected with Vegas’ only pick in the top 75 of the 2018 Draft which indicates he’s highly regarded. He has quick hands and should be a strong two-way center if/when he makes it to the NHL. A trip to World Juniors would do well for him to move up this list where he probably belongs.

Brisson’s selection to the eventual gold medal-winning Team USA at the World Juniors was incredibly impressive considering how stacked that team was. He offers something unlike anything we’ve seen from a VGK prospect to this point and that’s an unbelievable shot. He loves to sit in the circle on the power play and rip shots past goalies who know it’s coming and still can’t stop it. He definitely has a ways to go in regards to strength and experience and the offensive play can improve in other areas aside from the shot, but there’s no doubt Brisson has an exciting future. 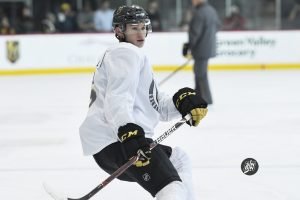 The moment Vegas drafted Korczak we knew he was going to be a big guy, but he’s already a monster just one season removed from his draft year and he’s probably only going to get bigger. As he progresses through high levels like World Juniors and the AHL, it appears his calling card will be more as a defense-first penalty kill type player, but he’s certainly looking like he has an NHL future, and probably a long one.

More on Korczak
4/16/20 – There’s nothing not to like about Korczak’s game. He’s got size, he’s a good skater, he’s physical, he’s calm on the puck, he can move the puck, and he’ll chip in offensively. His numbers will continue to look good in the WHL, but it’s all about how he looks against better competition going forward and unfortunately we aren’t going to get to see much of that any time soon.

11/16/19 – Korczak looked really good at camp and he has taken that game to the WHL racking up 14 points in 19 games for the Kelowna Rockets. Korczak is the type of defenseman that the Golden Knights are desperately looking for at the NHL level. Of course, he’s not ready at this point (nor would he be available to them anyway) but he’s a mobile, puck-moving d-man who will chip in offensively while taking care of his own end. The next time we really get to see what Korczak has to offer will likely be for Team Canada in December. If he can show something special in that tournament, the 2nd round pick is going to be in the top-five on this list next time for sure.

7/5/19 – The Golden Knights moved up in the draft to select Korczak and it didn’t take long to show why they valued him so much. In his own end, he’s a rock, defending both with his feet (mainly by keeping terrific gaps) and his stick. But what impressed me most with Korczak was his willingness to jump into the rush, or even start a rush. He reminded me a lot of Nate Schmidt, where the entire offense just looks more dangerous in transition when he’s out there.

See the rest of the rankings here.

Power Play Improvement Could Turn VGK From Great To Elite