The Golden Knights have a goalie conundrum. Stop me if you’ve heard that one before.

Like all goalie controversies, it’s about a surplus. Unlike skaters, there can be only one goalie a night. So, when a team has two, or in VGK’s upcoming case three, tough decisions must be made and they tend to have a ripple effect on the team at large.

Unlike the previous case the Golden Knights navigated (poorly), this one shouldn’t have as much impact… if handled properly.

The situation at hand is simple in theory but complicated in practice.

Laurent Brossoit is in the process of returning from the injury that ended his season prematurely last year. He missed all of training camp before rejoining the team in practice early in the season. Over the weekend, he was assigned to a conditioning stint with the Henderson Silver Knights indicating that his return is imminent.

Whenever he is ready, which could be as soon as tomorrow, the Golden Knights will have to make roster move to activate him off of IR.

Due to the 23-man roster limit, the Golden Knights cannot simply add him to the roster when he’s ready. Instead, they must clear a roster spot. Here are the ways they can go about doing that.

Option 2 is the only one of the four that does not at least put the Golden Knights at risk of losing a player to another organization. However, it would clearly only be a temporary fix as Bruce Cassidy’s goalie rotation has made it evident that Thompson is the preferred starter.

So, even if that were to happen for a game or two, eventually as long as all three goalies are healthy, they’d have to make another move. 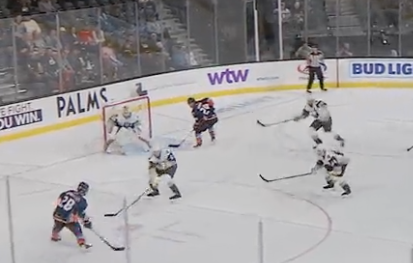 Here’s where the Silver Knights and their miserable performance comes in. Henderson currently sits in the cellar of the entire AHL with a record of 2-9-0. They’ve allowed 41 goals while scoring just 25, and they are riding a three-game losing streak in which they’ve been outscored 16-4.

Brossoit has played each of the last two games for the Silver Knights and his stats couldn’t be much worse. In 80 minutes of action, he’s allowed nine goals on 39 shots for a .769 save percentage and 6.76 goals against average. He was pulled after letting in four in the 1st period last night.

No matter how the team was playing in front of him, it was always going to be a challenge for Brossoit to get back up to speed quickly after so much time off. However, I don’t think anyone could have expected it to go this poorly, whether he has anything to do with it or not. (Our resident goalie expert placed one squarely on Brossoit and believes he could have done better on two of the other three.)

It may though end up being a blessing in disguise for the Golden Knights. After those two games, there’s no way Vegas is going to throw Brossoit into an NHL game, especially with how well Thompson and Hill have been playing. At the same time, it also may have scared away any other teams’ willingness to either trade for him or claim him on waivers at this point.

Coming off hip surgery, it’s unclear if Brossoit will ever be able to return to the level he played at before last year’s injury. He’s going to have to prove he can do it again before any team, including Vegas, is going to trust him in an NHL net.

Thus, to borrow a phrase from the great Ken Campbell of The Hockey News, the time is nye to place Brossoit on waivers.

At the absolute worst, a team steps up and places a claim and the Golden Knights lose him from the organization. At the moment, that doesn’t seem terrible because they have Thompson and Hill, but in the event of an injury or if one or the other’s play takes a turn for the worse, it won’t look so good that they gave away a legitimate NHL goalie for nothing because they were in a roster crunch.

But, if Brossoit clears, which seems more likely today than it did before he flashed a .769 save percentage in a pair of AHL games, the Golden Knights are suddenly in the driver’s seat.

Brossoit could continue playing AHL games behind a defense that appears likely to test his skills. If he does well, he will return to being seen as a viable option for the Golden Knights with more options as to how they can do it. Having cleared waivers, Brossoit would be able to return to the team on spot duty for up to 10 games without being subject to waivers again. Even if they remain up against the roster limit as they are now, Vegas could use Thompson’s waiver-exempt status each of the 10 games Brossoit would play.

Even if Brossoit doesn’t return to form, having him in the AHL is cost-effective for the Golden Knights. After clearing waivers, the Golden Knights would get about $1 million of salary cap relief from Brossoit’s contract, meaning he would cost $1.25 million against the NHL salary cap. Of course, that’s not ideal, but it’s much easier to manage than the $2.325 million he’s worthwhile on the NHL roster.

Plus, trading him would become easier. In his current state (before clearling waivers), any team acquiring Brossoit would be forced to keep him on their NHL roster and have the full $2.325 million count against their cap. Once he clears, every other team would receive the same $1 million savings and they’d be able to stash him away on their AHL roster as well.

The Golden Knights put themselves in this situation when they made the decision to acquire Adin Hill over the summer. They knew they were going to be pushed up against the cap and understood they didn’t have the roster flexibility with waiver-exempt players they’ve had in the past. The best case for the Golden Knights is for Brossoit to return from his injury and become the player he’s been in the past, which could potentially be the best goalie on the roster.

That hasn’t happened yet. And because it hasn’t, it has offered Vegas a golden opportunity. Let’s see if they take it.