Not Shopping Hurricanes To Vegas, Good News For Expansion

Logic has always been that Quebecor, the company behind the efforts to bring the National Hockey League back to Quebec, would be better off being the landing spot for a current franchise in need of a new home.

The league has no interest in leaving the Phoenix market no matter how many columns guaranteed the Coyotes were Vegas bound last Summer. They may move out of Glendale eventually but the moving vans are not headed to Vegas, they will probably head to downtown Phoenix where the team belongsThe Panthers are staying in Surprise, Florida until at least 2023 thanks to a Broward County $86 million financial package.

That brings us to the Carolina Hurricanes who are filling only 65% of the PNC Arena. The obvious reason is because the Hurricanes will once again not take part in the postseason…which doesn’t inspire the folks of Raleigh to attend… which sparks talk of relocation. To give this proper perspective the Columbus Blue Jackets are second from the bottom while filling only 77.7% of the Nationwide Arena.

Owner Peter Karmanos has talked about how stupid it would be to leave with ten years on their lease which really just runs through 2024. He receives 100% of all parking and concessions for all non-North Carolina State events and a discount on utilities.  The reality is that no matter how good of a deal Karmanos has he needs to either fill his arena or sell the team which he has been trying to do for some time.

This past week numerous reports have surfaced stating Karmanos has been shopping his team to Quebecor who I’ve said all along is more equip to pay a relocation fee than they are to pony up an expansion fee of $500 million American dollars.

With the Loonie at just under 77 cents compared to the dollar that would mean that Quebecor would have to pay $615,000 in a franchise fee. Far more than the cost to relocate a team which could save them over $200 million.

The nature of the discussions were not known, but today we come across photos that showed Commissioner Gary Bettman and Deputy Commissioner Bill Daly getting out of a limo in front of a hotel in Montreal, home of Qubecor’s main offices. 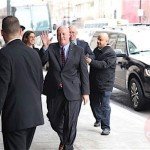 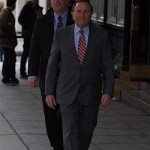 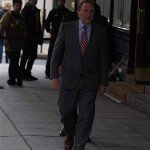 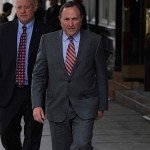 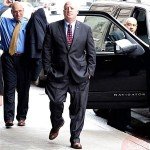 This all becomes too coincidental after awhile and although there is no guarantee either side’s visit is related, it does seem peculiar that both were in town.

So how does this relate to Las Vegas. First, when Gary Bettman speaks about a first year team he appears committed to making them competitive, so the easiest way to achieve that is to allow them and only them to be part of an expansion draft. In fact, it seems unlikely to me that a second expansion team will happen anytime soon because there’s no way you would get owners on board with a second expansion draft to take place under the proposed and very expansion friendly rules.

Second,  If Karmanos was shopping his team to potential buyers then why was he not in Vegas. Would you not want to negotiate the best deal for yourself or do you already know that Vegas is off the table leaving Quebec as your only option.

One could easily sense that a Las Vegas expansion announcement is eminent perhaps on the 6th of April when the new T-Mobile Arena will open for its first official event,  that would be Killer.