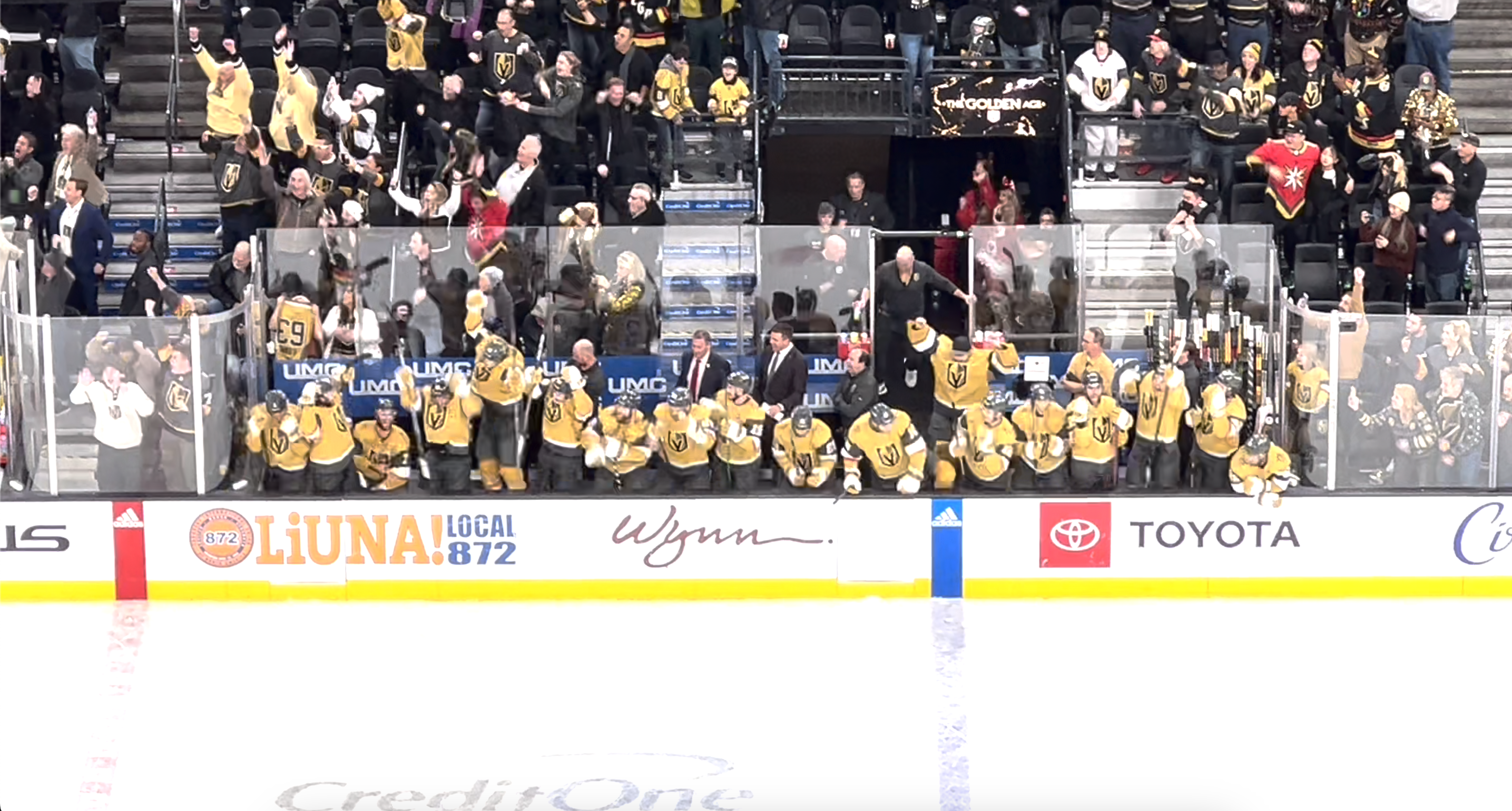 In the final game before the Christmas break the Golden Knights used a late-goal and a win in shootout to earn a much-needed come from behind home win.

From my seat in the press box I was able to capture the bench reaction for both of VGK’s shootout goals. The first from Chandler Stephenson to keep the Golden Knights alive, and the second by Mark Stone to win the game. (Video of both celebrations below.)

This is analysis of every player’s celebration style.

McNabb – Very tight celebrations. Hands close to his own chest, almost like someone scared him. Takes a moment to celebrate on his own, then joins in with others. Has a habit of punching people late in the celebration.

Miromanov – Does not like to sit for the big moment. Standing in one, then leaning way over the boards in the other. Classic two hands in the air holding up the stick. Instantly looking for high fives, including from those not willing to give them. Focus quickly turned straight to opening the door on the game-winner, courteous, great teammate.

Pietrangelo – Had a hard time seeing much of the Stephenson goal because Miromanov was standing in his way. Strong chin, taking an errant high-five/punch to the face from Miromanov. Small jump on game-winner, but definite air under both skates. Initiates massive hug with Martinez. Odd right-glove decisions. He took it off to wipe off his face prior to the shootout attempt, then nearly drops it upon the goal, recovers, but does not put it back on for the hug with Martinez. Probably wants that back as it likely caused an awkward hug grip.

Martinez – Sheer relief on the game-tying goal. Head down, both fists up. Wants high fives next, but struggles to find a good partner. Pietrangelo isn’t ready and Hague is already engaging with Miromanov, so he punches Hague’s other hand. Not ideal, but better than being left hanging. Terrified of Stone’s attempt shown by placing his chin directly on the boards. Explodes into celly though with a two-hand convulsing motion. Stellar hug reciprocation.

Hague – Has a signature celebration but with levels of intensity based on importance. Huge right-handed fist pump while opening entire body to rest of the bench. Already the tallest player on the team, he reaffirms that by also being the highest jumper. Poor dismount going over the boards including a dropped stick (possibly caused by an unintentional kick from Carrier). Definitely wins the award for most excited player on the bench.

Pachal – Strength is an issue here as he’s nearly knocked over by Hague on the winner. Possibly looking for high fives from the coaches who are only interested in non-players. Rookie inexperience definitely shines through here.

Kessel – Barely cares about the game-tying goal, very “yeah, I knew that was coming” reaction. Much more interested in figuring out when to hop over the boards than anything else. Not a high-five guy.

Carrier – Similarly unimpressed by game-tying goal. Unaffected by the blindside hug from Smith. Focused much more on getting over the boards.

Smith – Happier for others on the bench than himself. Head tap of Stone and a hug from behind of Carrier. Have to feel for him a little bit as the reciprocation from teammates is lukewarm at best.

Roy – Prefers a standing position. Even if seated, will stand before the action moment. Only has time for one fist bump though and it’s a quick jab to whoever is standing to his left.

Dorofeyev – Has two distinctive go-to moves. The first is a simple, but strong, left-handed fist pump. The second is the right-handed vertical stick tap. He holds the stick like a cane and then slams the butt-end into the ground near his feet.

Karlsson – Possibly the most reserved player on the bench, he goes to a two-handed tight to the chest double fist clench, similar to McNabb. Despite the limited outward display, it’s clear he’s engaged by his inability to remain seated as the shot is taken. It’s also perfectly in-sync with Amadio, which is a nice pre-celebration touch.

Amadio – Almost timid but clear excitment and it shines through with about a half-inch high jump. He wants to be thrilled, and clearly is on the inside, but he has an image to maintain, and he maintains it perfectly with these two celebrations.

Leschyshyn – Big high-five guy. Lets out his initial burst of emotion, then instantly wants high-fives from anyone and everyone. He’s able to rack up five on the two goals but you can tell he wishes he could have found more.

Rondbjerg – Went to the classic stick tap of the inside of the bench wall move on the first goal. Rare in shootouts, incredibly effective for a reserved person though.

Kolesar – Easily the coolest guy on the bench in these situations. Relies on the low lean against the boards but does not react much because he’s too cool for massive outbursts. One of three players to tap the outside of the bench with his glove on the first goal.

Stone – Not quite full on Expressive Mark Stone, but a nice strong right-handed raised fist before finding a teammate to aggresively fist-bump.

Stephenson – Living in some sort of bizzaro world, he was unphased by the goal before opening the door and skating directly to the goalie. Backwards of pretty much everyone else who went nuts and skated towards the goal scorer.

Cassidy – All business on the game-tying goal, instantly trying to figure out who goes next with Ryan Craig. Classic coach handshakes on the winner. Straight to Craig, then to Stevens, then equiment guy Critter. Solid, steady coaching celebration performance.