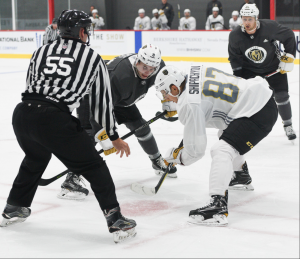 The NHL has made it very clear to begin the preseason that they’re done with cheating in the faceoff circle. So much so they’ve instructed officials to really crack down on faceoff violations. And, if two players get thrown out of the same draw, it’s an automatic delay of game penalty.

The rules are the same as they’ve always been, but the league’s decision to actually enforce them with more regularity was apparent in the Golden Knights second preseason game in Colorado.

We had 12 forwards dress and 11 of them took faceoffs. So that goes to show you. A lot of guys got thrown out and got frustrated. -Gerard Gallant

The Golden Knights also took two minor penalties for having multiple players tossed from faceoffs, including one which led to the 5 on 3 Colorado scored on.

They don’t want their feet touching the red line and they don’t want you jumping the gun and cheating. I think the rules were always there but they are now being strict with the rules. (The players) know what the rules are but when you’ve cheated for years and done these things for years and not had the referees call it, but now they are calling it, you have to adjust. They’ll adjust, they always do. -Gallant 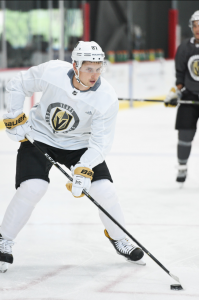 It’s timing. If you aren’t down in time. I got kicked out once for that. I got kicked out for my feet once, for turning once, for stick once. Everything, literally. It’s different because you are used to being able to do that, and it’s guys livelihoods in the faceoff circle. So it’s kind of brutal, but I’m sure it’ll ease up a little bit in the regular season. -Erik Haula

In addition to Haula, another Golden Knight who was particularly poor inside of the faceoff circle was Vadim Shipachyov. In the first period alone, Shipachyov was tossed three times, and it happened one more time in the second. When he was able to stay and take the draw, he finished with a paltry 2 for 9 record. Lucky for him, Gallant’s not concerned, yet.

I’m sure (with Shipachyov) there’s a language barrier. The linesman would try to help him and he really didn’t understand a lot. I don’t gauge wins and losses in faceoffs at all at this point because so many different guys took them. It’s not going to be that bad in the regular season. Guys will adjust and they’ll get used to it. -Gallant

Haula won just 30% of the draws he took and said the officials were likely a reason why.

They are for sure going overboard, and that’s what they are telling us they doing. We were trying to talk to them because it’s so new.  I kind of let it get to me in the third period. I got kicked out… (Ken says five), five!?! Only five times? Felt like even more than that. -Erik Haula

It’s likely an example of the league simply trying too hard to make a point in the preseason. However, the facts remain, it wasn’t pretty in the circle and coach’s patience is only going to last so long.