Sharks Down, But Certainly Not Out In Their Minds 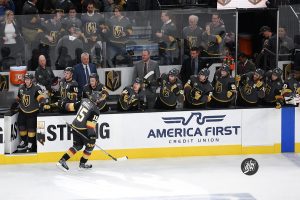 The San Jose Sharks are well aware of the challenge ahead. Their future may look bleak to some after losing Game 1 by the largest deficit in team postseason history, and missing a top forward suspended for Game 2, but you wouldn’t know by talking to the players.

You toss it away. You have to, you have to. -Logan Couture, Sharks forward

Unlike other Strip losers searching through their empty wallets, waiting for the drink lady to come back around to drown their sorrows, the Sharks shook off their loss and went back to work. In their eyes, they didn’t lose seven to zero, they lost one of seven.

It’s one game. You have to have a short memory in this sport, in a lot of sports. That’s all it is. -Joe Thornton, Sharks forward

Sharks coach Pete DeBoer ruled out Jumbo for Game 2, but the veteran leader has played from behind in a few playoff series. His calm demeanor adds to the flow of confidence in San Jose’s locker room.

Have a good first shift for everyone, for every line, for every pair. Once we get our feet under ourselves and get back to playing well and playing our game we’ll be okay. -Brendan Dillon, Sharks defenseman

Yeah, sure. A strong start would be good. They’ve won five straight and they’ve had a lot going for them. We’ll have to plant the seed early. -Dillon

Back to 2016, San Jose lost in the Stanley Cup Finals to a faster Pittsburgh Penguins team. Many considered team speed as the major factor for Pittsburgh’s Cup hoist. That was a potential re-occurring nightmare scenario coming into this series and appeared to be on display in Game 1.

Nope. No, it was our turnovers. That was the biggest factor, we turned the puck over. We lost it everywhere. In all three zones. -Couture

As Thornton said, it’s only one game, but that hasn’t stopped many from counting out San Jose advancing to the conference finals. The combination of defensive breakdowns, speed, turnovers and Evander Kane’s suspension has doubters speaking out. As for the players, they’ve moved on, and really don’t give a damn about our opinion, and especially Ken’s.