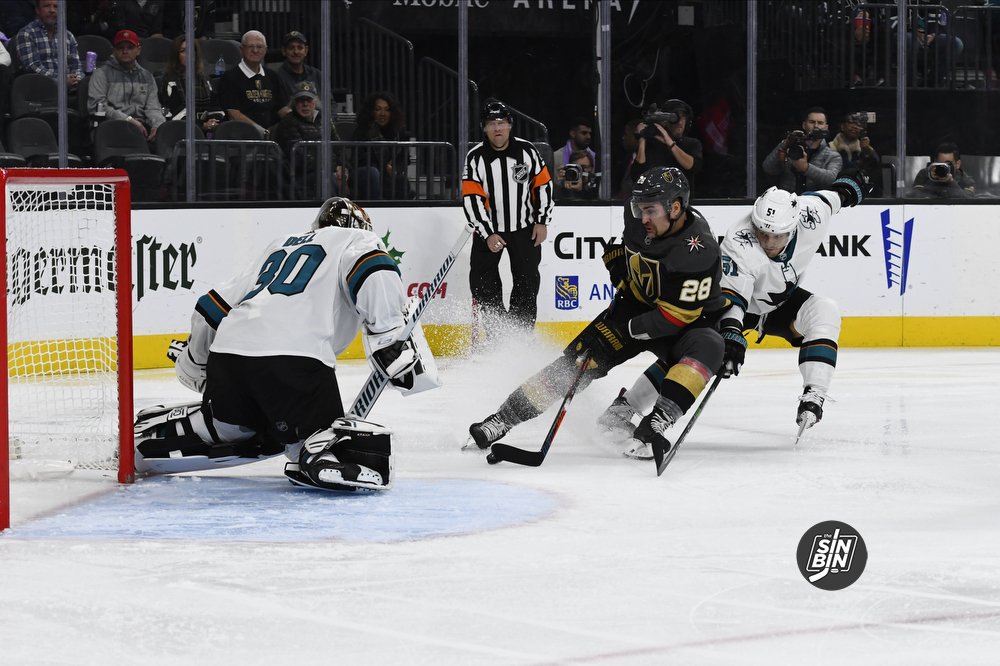 The Golden Knights are currently 10 points ahead of the 2021-22 team at this point in the regular season. More goals, more victories, more cheer. The word is out, the public is noticing VGK’s quick start and bounce back from last season. Thankfully for fans, the Golden Knights don’t look like they’re slowing down any time soon.

Tonight, in Toronto the Golden Knights will have a chance to win their eighth game in a row. The streak has stretched two weeks, beginning in Nevada and continuing in Eastern Canada. During their run, Vegas has defeated divisional rivals, conference contenders, Hart Trophy winners, a Vezina trophy winner, and several future Hall of Famers. Since October 24th, the Golden Knights’ offense per game is fifth-best (3.86) and third in goals allowed per game (2.00). Frankly, it’s been an impressive run for Bruce Cassidy’s club.

Noticeably, all seven victories have been won in different fashions. From toppling opponents, or squeaking by in overtime, to jumping out to a lead or playing from behind, Vegas has shown an array of ways to succeed. Here’s how each game was won.

The Golden Knights started their win streak by attacking the Maple Leafs from the moment the puck was dropped. After Toronto committed an early too many men on the ice penalty, Nic Roy gave Vegas a 1-0 lead on the expiring power play. Later, Chandler Stephenson scored the eventual game-winning goal 0:42 into the final frame. The Golden Knights controlled the game from the jump and won it within the first minute of the final period.

Through 40 minutes in San Jose, the Golden Knights looked flat. The Sharks offense, defense, and goaltending were outperforming a clearly more talented road team. Immediately after the second intermission the Golden Knights flipped a switch and exploded for three 3rd period goals. Shea Theodore scored 0:55 in, William Karlsson and Mark Stone capped off the 4-2 victory with goals of their own. Vegas came away with another two points where they weren’t the best team for most of the night. In the end, the better team took over in the most crucial moments.

The Ducks rarely have a fighter’s chance when they face the Golden Knights. It’s been this way since 2017. The Golden Knights did all of their scoring in the first half of the game. Vegas opened up the 1st period with power play goal and scored shorthanded in the 2nd period. The game wasn’t highly competitive and VGK’s special team success was the reason why.

Vegas took on the Winnipeg Jets that evening, facing stud goaltender Connor Hellebuyck. According to Cassidy, outside of thirty seconds, the Golden Knights outplayed the Jets for the entirety of the contest.

I mean, we were playing very, very well. They outplayed us for 30 seconds, and they have the lead. That kind of sucks, but at the end of the day, you can’t abandon ship, right? -Bruce Cassidy

It took a jaw-dropping individual move from Jack Eichel to finally fool Hellebuyck. The Golden Knights fought through the early frustration and were rewarded with seven seconds left in overtime. The club never abandoned the ship.

The Blueline Pitches In

Vegas began the game like a typical Pacific Division team on their first game of an East Conference road trip. The Golden Knights allowed an early power play goal but matched with a power play score of their own. The game defensively tightened up keeping Vegas in striking distance. Vegas’ depth evened the score but their blueline contribution snapped the 2-2 lock. Alex Pietrangelo recorded three assists, including one on Shea Theodore’s overtime winner. Vegas needed assistance in the O-zone and their defensive weapons got to work.

The Golden Knights dominated the opening 30 minutes in Ottawa. Mark Stone scored 1:22 into the game and the offensive floodgates opened. Reilly Smith, Zach Whitecloud, Chandler Stephenson, and William Carrier built a commanding 5-1 Vegas lead. The ice tilted against them in the second half of the game. The Senators pressured and threatened but the Golden Knights escaped by one goal. Cassidy wasn’t too concerned after the game.

We’re not a sixty minute team yet. We know that. I don’t think there’s any team in the league that plays for sixty minutes yet. -Cassidy

While it’s normally not a successful way to finish the final thirty minutes, many times a dragging teams benefit from an expiring game clock. It helped Vegas in Ottawa.

On Saturday, the Golden Knights took 42 shots and scored six goals against the Canadiens. The team credited their aggressive offensive approach firing shots from all angles. Cassidy playfully rattled Lil Jon’s “shots, shots, shots” and noted they don’t always go in. That night they did for Vegas. In total, there were seven goals in the final period and the Golden Knights scored four, including two on man-advantage situations. Finally, the high-volume shot approach worked against the Canadiens

Vegas’ growing chemistry, skill, and versatility will likely lead to more extended winning streaks throughout the season. While it’s possible the Golden Knights fall tonight in Toronto, it won’t cloud their accomplishments through 13 games. Especially, over the last seven. It’s taken dozens of players, several approaches, and adjusted strategies to earn their place in the standings.