One third of the season is gone and the first 27 games couldn’t have gone too much better for the Golden Knights. However, over the course of those games, Vegas has only seen five teams multiple times. In the next 27, they play former opponents for a second or third time 17 times. 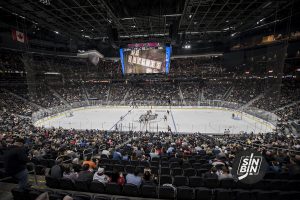 Why can’t they all be like the Coyotes? (Photo Credit: SinBin.vegas Photographer Brandon Andreasen)

Last night’s game was a big one in showing how opposing teams would respond to their second crack at the Golden Knights. It was hard to take much out of the Arizona games because, well, Arizona tends to lose most games no matter how they are played.

However, with Dallas and Winnipeg, the second games were played similarly to the first. With Dallas, Vegas had a tough time getting out in transition, they didn’t get a lot of shot attempts, and the Stars controlled the game. In the first game, the Golden Knights were able to overcome it. In the second game, they were not. Against Winnipeg, Vegas played their style of north-and-south hockey which gave them a jump on the Jets and they were able to ride the hot start to the finish line. The second time against Winnipeg, the 1st period went that way, and there were moments throughout the 2nd and 3rd, but when all was said and done, the Jets came out on top.

Then there’s Boston. The two games were nearly identical with the home team winning each one. They are by no means the style of game Vegas wants to play, but the two games are further proof that the second time through, the games tend to go the same as the first.

The first game in Anaheim was one of the Golden Knights’ best. They were flying around in all three zones, created tons of scoring chances, and were even able to overcome an incredibly hot goalie and a deficit to fight back and get the win they deserved. Last night, it appeared to be going the same way in the 1st, but it came to a screeching halt out of intermission.

I really liked the way we played the Ducks those first four periods…. I thought we stopped forechecking, we stopped jumping on the faceoffs instead of being real aggressive. We gave the Ducks defenseman time to make plays. That was the difference in the second period. They had a lot of time to make plays and they took the puck to us. -Gerard Gallant

The main question is, are teams adjusting to the Golden Knights style and playing a stronger game the second time around.

Statistically, it appears that teams are having a better run at Vegas having seen them previously. Dallas and Winnipeg went from losses to wins, and Anaheim went from getting smoked in their own building to a shootout loss at T-Mobile Arena.

However, the style of play in the second games has been, for the most part, similar to the first, which is good news for the Golden Knights. Every game is going to be a bit different, but if the Vegas style isn’t something that can simply be “solved,” the next 27 games might end up looking somewhat similar to the first 27. That is of course, if the Golden Knights can maintain the efforts they’ve been able to put forth.

Gallant has continually denied that teams will be able to “figure out” the Golden Knights. He believes it’s up to his team to keep playing the way they can. When asked last night if it was a change from the Ducks or from the Golden Knights that flipped the script from the 1st to 2nd periods, he once again put the onus on his players.

We changed, I don’t know why we changed. That happens sometimes. We just weren’t as fast as we were in the first period. -Gallant

The Golden Knights are now 17-9-1. If they can keep from changing too much, they might just get to see the same team seven times in a row come April.