While the fans were painting, the entire Golden Knights roster showed up to sign autographs, take pictures, and chat with the thousands in attendance. It was as unique as a “hockey” event can possibly be.

Season ticket holder event. All signs point to me messing up this painting miserably. pic.twitter.com/DCPkubwxHA

When the event ended season ticket holders were given their 2018-19 member box. (Pictures at the end of the article) It’s become a tradition the team intends on continuing for at least the first five years. In that box was a tiny glass vial filled with the water that made the ice at T-Mobile Arena last season.

Like anyone, I saw the vial and had questions, is it really the actual water and if so, what are the logistics of making this happen? So, like any good professional writer I found the answer, and yes, it really is the water.

We needed something different. Brian Killingsworth (Chief Marketing Officer) brought it up and we’re like, well that’s interesting, is that even physically possible? I said, if we can’t do the real thing, it would be foolish. So, the end of the season we worked with Salami (Ice Man), and once the ice melted we had buckets down at T-Mobile Arena. Then, we had to ship those buckets by ground to Arkansas. Our group out there had the vials already and they filled them. We only did 6,000 of them. There’s still some water left, but it is absolutely the real water from the ice. -Todd Pollock, Director of Ticketing

Yes sir, it’s absolutely the real ice. I gathered about six or seven cubic yards of snow that we cut off the ice and collected it in 5-gallon pails. We let the snow melt and settle in there and now we have Stanley Cup Final water. -George Salami, Ice Man

So now, every person who has one of those boxes has actual ice that was skated on during the Stanley Cup Final. Pretty cool.

Other items in the box are a “Vegas Born” scarf, commemorative tickets, and an alternate logo pin. But the real hero is the box itself. 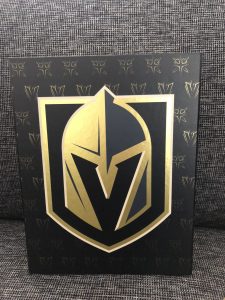 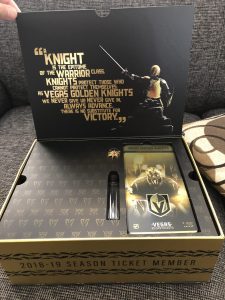 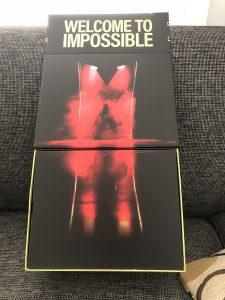 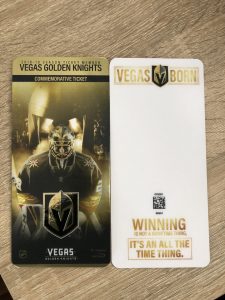 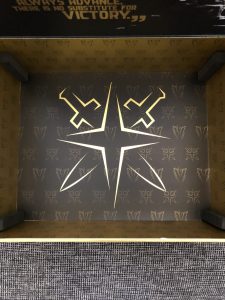 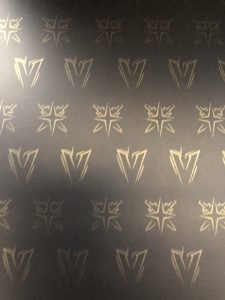