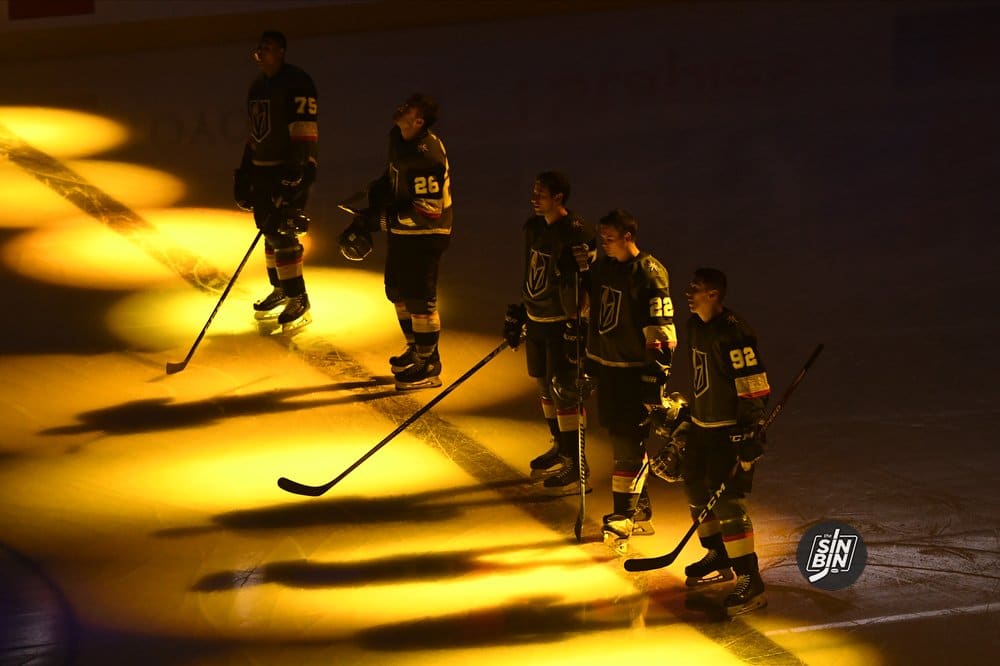 Hockey season is just two weeks away and our friends at William Hill have you covered with a few different options to bet on the Golden Knights and the NHL. They’ve listed season point totals for all 31 teams, plus division odds, Cup odds, and a special VGK prop for how many points the Golden Knights will amass in the month of January.

Let’s make some picks for the West Division.

The Ducks are stocked full of young talent and have an incredible goaltender. Of all teams in the West Division, they are the one I see as the most volatile. I can see them putting up 65 points and challenging for a playoff spot, and I can also see them struggling for a long stretch and it burying their season. Last year they came up a bit short of a point per game, this year I think they can get there. Pick: OVER 57.5 Points

There was a time last season when it looked like Arizona could win the division. They even made a mega trade to go get Taylor Hall. It kind of all fell apart after that but then the Pause hit, they were gifted a playoff spot, and made the most of it getting a series win. They did it in the most boring way physically possible though and now the most exciting player on that team is in Buffalo. In the end, they are the Coyotes and they always tend to find a way to underwhelm no matter what the expectations are. Pick: UNDER 59.5 Points

That’s a lot of points. 77 points in 56 games is the equivalent of 113 in an 82 game season. I think they can do it though. They’ll go into every game this year expected to win and will be -200 or more favorites in close to half of them. I see them jumping out to a massive West Division lead and never giving it up. The fear is they take their foot off the gas late and win the division with 75 points instead of 77, but it’s not a great enough fear to take the under. Pick: OVER 76.5 Points

The Kings are not good, easily the worst team in the division and if Drew Doughty plays like he did last year they are might be the worst team in the entire league. 53 points seems like an incredibly high bar for a team that has to play 43% of their games against Colorado, Vegas, and St. Louis. This year’s format is set up for a few teams to get completely annihilated, and Los Angeles has a good chance of being one of those teams. After San Jose, this is the best bet in the bunch. Pick: UNDER 52.5 Points

Minnesota ended last season with 77 points in 70 games, which was good for 6th place in the Central. That same pace would put them exactly on the 61.5 mark and would probably once again see them on the outside of the top four in the division. However, replicating last year seems like it would be a good outcome for Minnesota, not the expectation. Despite his faults, Bruce Boudreau tends to get the most out of his teams, without him, the Wild may be a candidate to struggle. I didn’t like how they looked in the bubble and I expect the travel to challenge them more than anyone else in the division. I could even see them struggling to get to 50 points. Pick: UNDER 61.5 Points

The Sharks were quite the trainwreck a year ago finishing the abridged season in dead last in the Pacific. However, they still managed to rack up 63 points in 70 games despite their nightmare season. Now, they just need to get to a point per game to clear the William Hill total? This seems like an absolute slam dunk over to me. Prior to last year, San Jose had missed the playoffs just once in the last 15 seasons. They’ve only missed seven times in 27 years and back-to-back years just twice the last being back in 1997. They’d have to be incredibly awful to not clear 56. Can’t see that happening (again). Pick: OVER 56.5 Points

I’m always wary of a team that loses their captain, especially when he goes to another team in the division. I’d still guess the Blues get to the playoffs, but when all is said and done I see them lagging quite a bit behind Colorado, which they didn’t a year ago. Their showing in the bubble was atrocious and like Minnesota, playing in the West doesn’t do them any favors travel-wise. I’m not saying they are a bad team, but I think they’ll be fighting for a playoff spot more than they are fighting for the #1 seed. Pick: UNDER 70.5 Points

When it comes to betting on the Golden Knights at a Vegas sportsbook like William Hill, the normal rule of thumb is to bet against them or lay off. The reason is that the public loves to blindly bet their favorite team and the books set the odds to protect against it. As much as I expect the Golden Knights to be a great team, 74 points in a 56-game regular season is a ton to ask. That’s a 1.32 point per game pace, which is equal to what Vegas pulled off in 2017-18. I’m not saying they can’t do it, because they absolutely can, but the right bet is the other way. They can miss this number by 8 and still get in the playoffs fairly easily. Pick: UNDER 73.5 Points

In writing this article I came up with a point total for every team to make sure my projections weren’t way off the possible number of points. In an 8-team division with 56 games, there are guaranteed to be 448 points handed out. Throw in the overtime loser point and that number should be closer to 500. Here’s how I project the 2021 West Division.

So, the bet would look like it should be Colorado +160, but to me, the value isn’t there for that bet. Instead, I’d consider either San Jose (+1200) or Anaheim (+2000). Maybe one races out to an early lead and hangs on during a wacky season.

The Golden Knights play eight games in the month of January. Six of the eight are at T-Mobile Arena with two against each of Anaheim, Arizona, and St. Louis. The road trip is an easy one over to Arizona (which might be the closest thing to a home game Vegas has all year if they let fans in). The first two games concern me a bit because the teams that have been off for nine months are going to have quite the appetite to play that maybe the playoff teams don’t to start the year. As mentioned earlier, the best bet on VGK is always to go against them, and I’ll do that again here. I think they’ll get nine points in the first eight games for a decent but not great start to the season. Pick: UNDER 10.5 Points

It has been rare to see all three goalies on the ice for a morning skate. Today, they are and Robin Lehner is the first off the ice.

The expectation remains that Fleury starts tonight but this throws at least a bit of doubt into the mix.