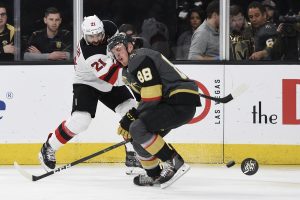 Have a feeling this picture is going to see some major use until November 18th. (Photo Credit: SinBin.vegas Photographer Brandon Andreasen)

It was supposed to be an easy assignment. Go through the newswire, finding out what other NHL cities were saying about Nate Schmidt’s 20 game suspension. It’s big news to Golden Knights fans, and the expectation was there would be hot takes coming from everywhere else as well? After all, it’s the first PED suspension since 2016, and it’s a case that pushes the league’s banned substance policy to the edge.

Three and a half hours of searching harder than 11-year-old me searched for plastic eggs with nickels in them on Easter, I only found four outlets discussing Schmidt’s suspension or the league’s substance policy.

What stood out to me was Nate Schmidt said he only used supplements supplied by the team. The majority of the players do take some sort of supplement. Their diets are so sophisticated and the training is so sophisticated. – TSN’s Dave Poulin

The former NHL center was stunned to find out the tainted supplements Schmidt took came from the team. Suggesting any blame shouldn’t be placed on the player.

I see him (Schmidt) as somebody with a great deal of character. And as somebody that’ll bounce back from that. -Eric Duhatschek, The Athletic

While I could keep going, I simply can’t bury the lead any further. The real story is the lack of coverage. Schmidt’s suspension is a troubling issue for the Golden Knights and the NHL. The team and the player adamantly denied any knowledge of performance-enhancing supplements but the league maintained its zero policy stance. No matter how little the trace was, it seems to me, there is real disconnect with the league.

Major hockey markets that set daily NHL conversations like Montreal and Toronto were too busy talking about the crummy Blue Jays and the CFL. Boston, Chicago, and New York are too distracted by baseball pennant races, and forget Dallas, Philadelphia, and Pittsburgh, they’re all neck deep in football. Then there’s the whole Nike/Kaepernick thing, we aren’t touching that one. Even Schmidt’s home state, “The State of Hockey” spent little time on the NHL’s latest suspension.

Just imagine if Canadiens defenseman Shea Weber or Penguins D-man Kris Letang were suspended for the same minuscule amount of banned substance Schmidt tested positive for. The hockey world would be screaming for policy change. I’m not advocating for an early release date for Schmidt, but I am disappointed and surprised by the lack of coverage in so-called major hockey markets. Schmidt’s suspension is not just a story about a Vegas Golden Knights defenseman. No, it’s a sports story that was created by cheaters in other sports. Banned substance tests have major flaws and Schmidt could be the latest victim.

But get used to it Golden Knights fans, your team isn’t the shiny new toy anymore. If it were a player on a Canadian team, there would be a lot more uproar. Add in the east coast e bias and Vegas becomes like any other Pacific Division team. Ignored by most up until the postseason, and even then are overpowered by “Is this the year for Canada?”